by Charlie Viola (Melbourne) , Martin Fowler (Melbourne), Haris Argeetes (Melbourne) and James Totonjian (Melbourne)
Moore Australia
Your LinkedIn Connections
with the authors
To print this article, all you need is to be registered or login on Mondaq.com.

The Australian economy is currently being buffeted by a number of conflicting factors.

Low interest rates have encouraged moderately strong credit growth that has translated into a surge in both house prices and residential construction. In turn higher house prices combined with higher share prices have made consumers feel wealthier, supporting consumption. The flow through effects into the broader economy, while modest to date, should continue while credit growth remains elevated. In addition, the recent fall in the AUD will begin to provide some assistance to the beleaguered import competing industries.

These positive developments are now being challenged by a sharp fall in commodity prices as signs emerge that China's debt fuelled property (and infrastructure) boom have peaked. Given the significant contribution made by mining to Australian economic output, this will inevitably create a drag on growth.

This structural problem in China has been a long time coming, fuelled by artificially low interest rates that have promoted massive over investment into, in many cases, unproductive investments. By way of explanation, the nominal lending rate should roughly equal the nominal GDP (real GDP plus inflation) rate over the medium term. However in China the lending rate has been much lower for many years. Until recently investors have been able to borrow money (in percentage terms) in single digits while nominal growth has been well over double digits, creating a windfall for investors. These days now appear to be almost over. While credit is still too cheap in China, efforts to reflate China's economy by relaxing credit standards have been met by opposition from the People's Bank of China who are already concerned about rising bad debt risks.

This would imply that the end of cheap money is nigh. China is running out of options to keep the boom times going. Further monetary or fiscal stimulus could delay the day of reckoning, but will only exacerbate the existing problems. This is why China might decide to address its debt burden by bailing out banks, and local government financing arms. This option, however, would involve a sharp increase in government debt, which would inevitably slow the rate of future growth. So regardless of the option China takes to tackle its problems, the likelihood of a significant impact on Australia is high. Inevitably demand for exports such as iron ore and coal will fall, decreasing the ability of mining to continue to prop up domestic growth. Further, China has recently signalled that it intends to significantly increase the use of renewable energy which has major long term ramifications for our coal industry.

In the short term we believe growth in the non-mining sector is now sufficiently robust to offset the sharp downturn in mining, although the growth rate will inevitably be lower. Over the medium term we remain concerned about the sustainability of the current drivers of growth. House price growth spurred by an increase in household debt rather than any corresponding improvement in incomes or wealth is always fragile and unsustainable. When interest rates eventually rise, the risk factors for the Australian economy will inevitably increase commensurately 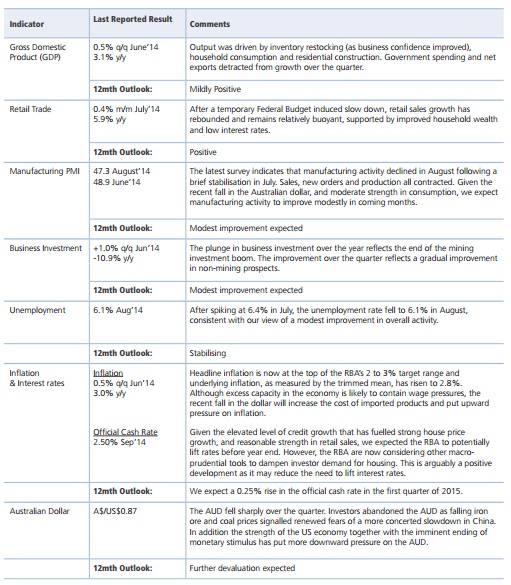