by Ben Mahler
KordaMentha
Your LinkedIn Connections
with the authors

As experts, it sometimes seems that litigation lawyers come in two varieties: those who ensure that no documents (email or otherwise) are ever communicated between expert and lawyer other than a final report (seemingly to protect legal professional privilege) and those who believe it will all work out in the end, so don't worry about it. There are rarely those who sit on the fence. But thinking in such absolutes may not result in the outcome parties are hoping for, and not being able to prove a draft was communicated may mean no privilege is found.

This article looks at a recent decision in the Supreme Court of Victoria, Malone v La Playa. It was found that a draft report prepared by an expert witness which was communicated to their instructing solicitors was privileged, whilst another version of the draft report, which was not communicated, was not privileged. We also look at the reasons set out in the judgment for and against finding privilege in respect of a number of types of documents.

The plaintiff and defendant were the respective owners of No 6 and No 8 Shandford Avenue, Brighton. A fence divided their property. The fence was a combination of brick, concrete and wire mesh. Mr Racovalis and his company were engaged by the defendant to renovate No 6, and this include works on the fence in 2017 and 2018. A dispute arose.

Mr Racovalis provided an expert report in October 2020. In November 2020, the defendants issued a subpoena on Mr Racovalis for various document categories including "all correspondence... relating to the [No 6 or No 8]". This captured a number of draft reports prepared by Mr Racovalis. Objections on grounds of privilege were filed by the plaintiff's solicitors, which were eventually narrowed to a set of documents in a Disputed Documents List.

Justice Matthews firstly addressed whether common law principles of privilege applied or the Evidence Act. She found common law principles applied given it was not the expert (i.e., the person to whom the subpoena was issued) who objected to the provision of documents, but the plaintiff's solicitors.

She then referred to eight principles, taken from Asahi Holdings1. 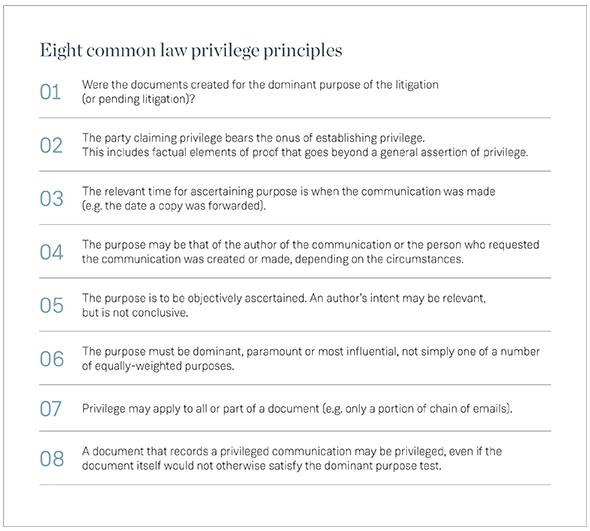 In her judgment Justice Matthews classified the documents in dispute into four groups, and made the following findings:

In respect of the stand-alone draft reports, Justice Matthews reached the conclusion regarding privilege based on evidence of communication. For experts (and those briefing them), this indicates:

This judgment continues to show the potential complexity of privilege rules on even a claim which on its face does not appear complex.

Seeking to avoid all written communications with experts, ostensibly to avoid creating a 'paper trail' that could be used for cross examination, may potentially increase  the risk that privilege will not apply to draft reports created by experts as there will be little evidence of communication.

We suggest that solicitors should consider upfront discussions with experts regarding the creation and communication of documents to avoid inadvertent waiver of what would be otherwise privileged communications. It is also a good idea for experts and lawyers to agree on the proper actions to take place should an expert receive a subpoena. These are, after all, legal issues.

The above suggests that when dealing with experts a compromise is needed to balance the perceived risks of discovery of written communications and a blanket ban of those communications. At the very least, records should be kept of when a document was not provided but its contents were communicated, whether that was in person, over the phone or via a Zoom call.