Australia: Inside Track: Local Government - In the media, In practice and courts, and Cases

The three-year initial period under the Crown Land Management Act 2016 (NSW) (CLM Act) will expire on 31 June 2021. Accordingly, the interim arrangements relating to the grant of leases and licences over 'community land' as classified by the Local Government Act 1993 (NSW) (LG Act) will also end. This means that, as of 1 July 2021, councils can only grant leases or licences over community land in accordance with an adopted 'plan of management' (PoM) (except in limited circumstances).

Under the CLM Act, councils appointed as Crown land managers are required (except in limited circumstances) to manage Crown land as if it were classified as 'community land' under the LG Act. Under the LG Act, community land must be managed in accordance with a PoM. Leases and licences can only be granted on community land where an expressed authorisation is provided in an adopted PoM (except in limited circumstances, as outlined below).

Under the CLM Act, councils were granted a three-year period from 1 July 2018 – 31 June 2021 (Initial Period) to adopt a PoM. To facilitate continued access to and use of land while the PoMs were being developed, the CLM Act provides interim arrangements for the granting of leases and licences during the Initial Period. The interim arrangements allow Crown land managers to grant certain leases and licences over community land, even though they may not ordinarily be permitted under a PoM.

Council Crown land managers can grant leases and licences on community land as outlined in the table below, until the earlier of: 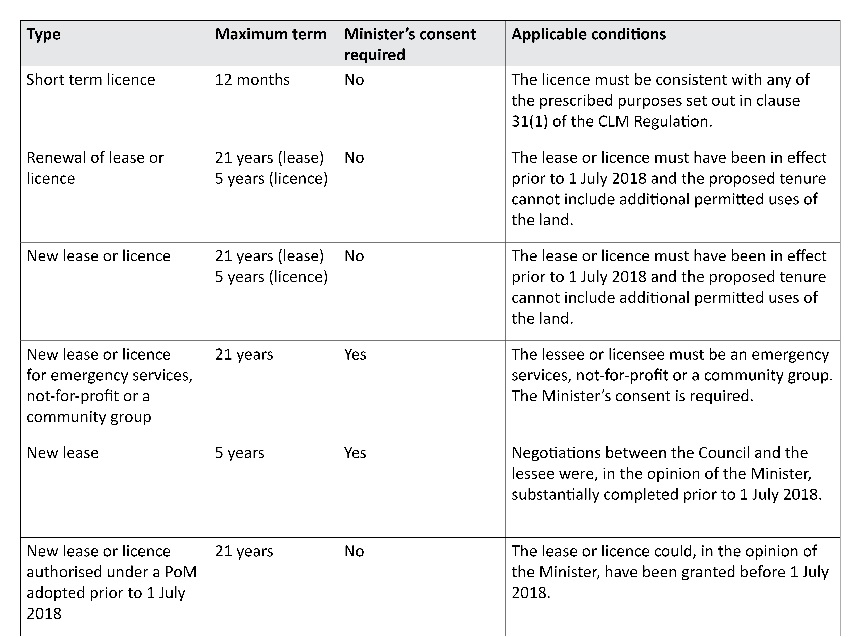 Leases and licences of community land from 1 July 2021

From 1 July 2021, Council Crown land managers can only grant leases and licences of community land:

Accordingly, councils should familiarise themselves with what leases and licences are expressly authorised in the applicable PoMs.

Councils should also ensure that all leases or licences comply with relevant legislation, Crown land management rules, policies, regulations, guidelines and fact sheets. The relevant tenure provisions under the LG Act are set out in the table below.

Flood crisis highlights need for "tough conversation" about suburban spread: Littleproud
Australia must have a "tough conversation" about where people should build their homes, Emergency Management Minister David Littleproud says, and state and local governments needed to urgently devise new rules for planning and developments, based on recommendations from the bushfires royal commission (22 March 2021).  More...

Local government ready to help turn our waste crisis into a billion-dollar economic opportunity
The Australian Local Government Association (ALGA) has hailed the Federal Government's National Plastics Plan 2021 as an important milestone on the road to a more environmentally and economically sustainable future (16 March 2021).  More...

How green energy has become "the new black" in booming Queensland regions
Mayors of five Queensland regions rich in resources, agriculture and tourism have added green energy projects to the list of economic pillars that will underpin the prosperity of their communities into the future (19 March 2021).  More...

In practice and courts

Hawke v Brisbane City Council [2021] QPEC 16
PLANNING AND ENVIRONMENT - APPEAL AGAINST REFUSAL OF CODE ASSESSABLE DEVELOPMENT APPLICATION - where proposed development involved demolition of a pre-1947 house - where central issue was whether the subject house contributed to the traditional building character of that part of the street within the Traditional building character overlay.
Planning Act 2016 Qld s 45, 60
Planning and Environment Court Act 2016 Qld s  43

This publication does not deal with every important topic or change in law and is not intended to be relied upon as a substitute for legal or other advice that may be relevant to the reader's specific circumstances. If you have found this publication of interest and would like to know more or wish to obtain legal advice relevant to your circumstances please contact one of the named individuals listed.