From 2020, businesses and officers in Victoria whose negligent conduct cause a workplace death may be guilty of workplace manslaughter. While companies, associations and partnerships will face fines of up to AUD16.5 million, sole traders and officers could face up to 20 years of gaol time.

It is clear from the Queensland experience that these workplace manslaughter offences are not just hypothetical. In Queensland, Brisbane Auto Recycling Pty Ltd was charged on 25 October 2019 with industrial manslaughter relating to a worker who was struck and killed by a reversing forklift at a wrecking yard following the alleged failure to separate pedestrians and mobile plant. The industrial manslaughter charge is before the Holland Park Magistrates Court for committal on 29 November 2019.

This charge demonstrates that WHS regulators and prosecutors are not simply going to leave these offences on the statute books without testing them in Court. As such, there are very real consequences requiring serious consideration.

In this article, we will discuss the recent passage of workplace manslaughter offences in Victoria and our top tips for how to protect your business and senior leaders from being charged with these types of offences.

In Victoria, a person will be guilty of workplace manslaughter where they:

As for each of the elements of the workplace manslaughter offence in Victoria:

While no commencement date has been announced for the workplace manslaughter offence, it is expected that it will apply to any negligent conduct occurring on or after 1 July 2020.

To whom do Victoria's Workplace Manslaughter Offences Apply?

In Victoria, both businesses and officers can be charged with workplace manslaughter.

Where a business (which includes companies, associations and partnerships) is found guilty, they could face fines of up to AUD16.5 million. A sole trader who conducts a business (but not a volunteer) could face up to 20 years of gaol time if found guilty.

Officers found guilty of workplace manslaughter in Victoria could also face up to 20 years in gaol. Unlike the Queensland offence which applies to executive officers 3, the Victorian offence applies to any person considered an officer under the Corporations Act 2001 (Cth). This includes directors, secretaries and any person who can substantially affect the corporation's business or financial standing.

Like most states and territories, the move towards workplace manslaughter in Victoria follows the death of four people at Dreamworld in October 2016. The laws were a 2018 election promise of the Victorian government and are aimed at sending "a message to employers that putting lives at risk in the workplace will not be tolerated".4

The view of the Victorian government, and rightly so, is that every family is entitled to expect their loved ones to come home from work each day. Yet, in the last five years, there have been over 100 people killed at work in Victoria. On average, there are 30 workplace deaths in Victoria each year with 19 so far in 2019. Each death leaves a lasting impact on the families, friends and colleagues of those workers.

How Should My Business Prepare for Workplace Manslaughter?

Put simply, the best way to avoid you or your business being charged with workplace manslaughter is to not have a fatality in your operations. This may sound trite, but it means focusing both your organisation and its senior leaders on the prevention of catastrophic incidents. In that regard, we recommend that organisations and officers undertake the following:

1. Ensure that organisations and officers understand the critical health and safety risks in their operations and have verified that controls for those critical hazards and risks are implemented and working effectively. In that regard, we note that in 2018, 91% of prosecutions around the country following serious incidents involved 10 particular mechanisms of injury / fatality: 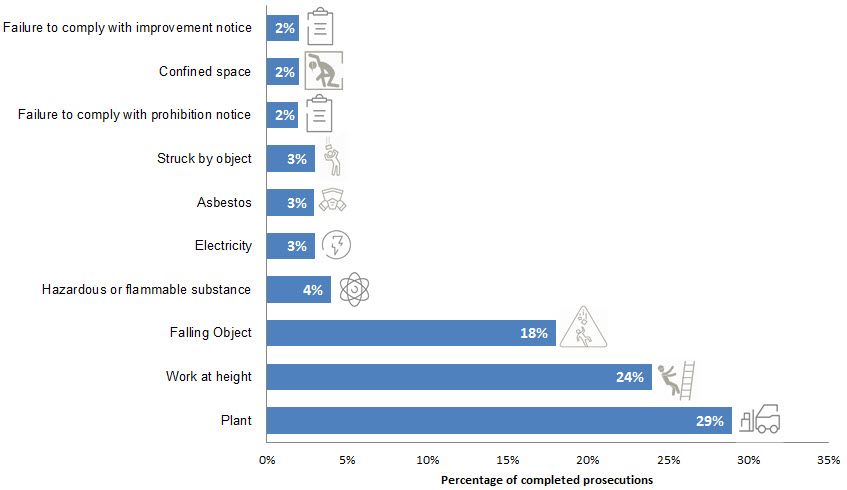 We recommend that organisations reflect on how these issues relate to their operations and the critical control measures they have in place to avoid such incidents.

3. Establish fatal incident response protocols for your organisation. These protocols need to reflect on the different issues in fatal incidents in light of workplace manslaughter offences. You should conduct incident response training and conduct emergency drills in your organisation so that you and your personnel are prepared for complying with your legal obligations in the events following a notifiable incident. To respond quickly and effectively to fatal incidents, you should consider establishing legal panels with multiple specialist health and safety lawyers. With the threat of gaol sentences and substantial fines, you may require multiple lawyers to attend to the different legal interests of the company and individuals who may be involved in the incident.

3. The Queensland industrial manslaughter offences apply to both PCBUs and Senior Officers. For the purpose of the Queensland offences, Senior Officers include executive officers of corporations and individuals who make, or take part in making, decisions affecting all or a substantial part of the business' functions. This extends beyond senior management to possibly include middle managers. For further information on the Queensland industrial manslaughter offences, see our Industrial Manslaughter Reform report at https://www.clydeco.com/insight/article/industrial-manslaughter-reform-the-rise-of-a-solution-not-fit-for-purpose.