Australia: Super In The Spotlight: Conflicts, Ongoing Advice Fees And Selling Of Super

Funds should expect to see a renewed interest by the regulators as to whether trustees, in practice, are prioritising the interests of their members and managing conflicts. Trustees also need to immediately review fees being deducted from members' accounts and ensure that any ongoing fees are limited to advice about particular superannuation investments.

Observations about the sector 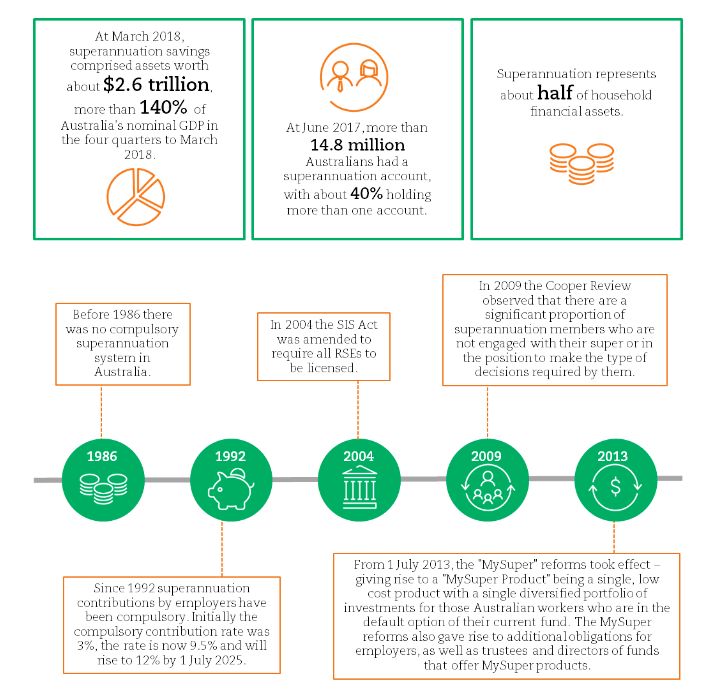 The Royal Commission's flagship concern with the superannuation sector was the potential for conflicts of interest and the management of those conflicts of interest. The Royal Commission explored several examples of potential areas of conflict. Of particular concern was the potential conflict of trustees of for-profit funds which are part of a corporate group and have a related corporate entity which can perform the administration services or investment management services of the fund, for a fee.

The Royal Commission noted the positive covenants imposed by section 52 of the Superannuation Industry (Supervision) Act 1993 (SIS Act), which include an obligation to perform the trustee's duties and exercise the trustee's powers in the best interests of beneficiaries and an obligation to prioritise the beneficiaries' interests where a conflict arises.

The Royal Commission found that trustees can fulfil their duties to members only if they recognise that the interests of the fund's parent company and the interests of members are not only different but are often opposed. The Report observed that:

(a) Disclosure of conflicts of interest is not enough. The statutory duty to comply with the RSE licensee law and to perform properly the duties of the trustee demands action, not just disclosure;

(b) Outsourcing to a related entity requires ongoing care and diligence on the part of the trustee. The best interests covenant means that the trustee's obligation is to perform its duties and exercise its powers in the best interests of the beneficiaries. Hence, both the instigation and maintenance of every arrangement must be judged against the best interests of members. The trustee should test the information received and query it where necessary;

(c) APRA needs to "get deeper" and identify where frameworks and polices are not effective. The regulators must be astute to observe whether trustees are giving priority to the best interests of members. Commissioner Hayne noted that checking whether regulated entities have robust frameworks and policies in place is not enough.

The Royal Commission noted that strategic enforcement action to both address the immediate member harm and to deter future conduct, appears to have been 'missing in action' in the superannuation industry.

Despite its misgivings around the potential for conflict in the sector, the Royal Commission ruled out the more drastic reforms to the industry which had been raised in submissions:

The Royal Commission also recommended that breach of the SIS Act covenants be a civil penalty provision.

The Royal Commission was very critical of the deduction of financial advice fees and ongoing advice service fees paid from super accounts.

The Royal Commission found that these fees were often "invisible" and where the service rendered was "broad financial advice", deduction of these fees from a member's superannuation account is inconsistent with the legislative requirement that a RSE ensure that the fund is maintained solely for the identified purposes.

The Royal Commission found that advice that may be paid for out of a superannuation account is limited to advice about particular actual or intended superannuation investments, ie consolidation of accounts, selection of funds, products or asset allocation within a fund. It does not include broad advice on how the member might provide for their retirement or maximise their wealth generally. The Royal Commission stated that any practice by trustees of allowing fees for this type of broad financial advice to be deducted from superannuation accounts must end.

Whilst the Royal Commission conceded that prohibiting ongoing advice fees may reduce access to financial advice for some Australians, it considered that the risks of ongoing service fees (such as the "fee for no service" scandal), outweigh the limited benefits the existing arrangements may provide.

The Royal Commission said that if ongoing advice fees are to be permitted, then they should be controlled in at least two ways:

(a) The advice in respect of which fees may be charged is limited to advice about particular superannuation investments; and

(b) Any such arrangement should require annual renewal.

For MySuper accounts, the Royal Commission recommended that no deduction for advice of any kind should be made – the simpler the arrangement, the better. If a member wants advice, that should be charged and paid by the member directly.

Commissioner Hayne recommended that all forms of unsolicited offering of superannuation arrangements should be prohibited and that the relevant legislation be amended accordingly.

Commissioner Hayne noted that funds compete to be nominated as default funds, with some large funds "treating" employers, perhaps by way of entertainment and sporting events, in order to gain members.

Commissioner Hayne recommended that the legislation be amended accordingly and that a breach of the prohibition should be a civil penalty provision, enforceable by ASIC.

The often cited criticism of the superannuation sector of individuals inadvertently holding multiple superannuation accounts, being charged multiple sets of administration fees and holding multiple life insurance policies, was again touched on by the Royal Commission. The Royal Commission recommended that machinery be developed which "staples" a person to a single default account.

Currently superannuation is regulated by APRA and ASIC. Commissioner Hayne did not support the creation of a superannuation-only regulator, finding that the twin peaks model of regulation should be maintained with slight adjustments.

Commissioner Hayne also said that conflicts of interest should be of immediate concern to APRA as prudential regulator and ASIC as conduct regulator.

Finally, Commissioner Hayne also considered that over time, an accountability regime, perhaps modelled on the BEAR, should be extended to all RSE licensees.

The Australian Government has already agreed to take action on all of the superannuation recommendations, so it is likely that we will see a bill with proposed amendments to the SIS Act tabled before parliament shortly.

In the interim, funds should carefully review the ongoing service fees (if any) being deducted from members accounts and ensure that fees for "broad financial advice" are not being deducted from members accounts. Funds which operate as part of a for-profit group should also carefully review their frameworks to ensure that conflicts are either avoided or carefully managed. We are likely to see more regulator activity in this area, so RSEs need to look beyond whether there is a conflict policy in place and take proactive steps to ensure that it is acting in the best interests of its members and its conflict policy is being applied effectively. For example, for-profit funds which are part of a corporate group which have an investment management service, should consider multiple providers and be able to demonstrate that proceeding with the investment management services from the related entity is in the best interest of members.

ARTICLE TAGS
Australia Employment and HR Retirement, Superannuation & Pensions Finance and Banking Financial Services Fund Management/ REITs
POPULAR ARTICLES ON: Employment and HR from Australia
Are you ready for the new annualised salary arrangements taking effect from 1 March 2020?
PCC Employment Lawyers
Discusses significant operational impact on employers who pay annualised salaries to employees covered by these modern awards.
Abandonment of employment - can you fire an employee for not showing up to work?
Coleman Greig Lawyers
Absence from work may be a reason to dismiss, but it is not an exception to rules about termination or adverse action.
Coronavirus – what employers need to know
Coleman Greig Lawyers
The coronavirus global health emergency outbreak changes daily, so employers should be vigilant about keeping up to date.
Apprentice unfairly dismissed for refusing to work overtime
MDC Legal
The decision is a reminder for employers to carefully consider whether requests to work additional hours are reasonable.
Using annualised salaries: are you ready for 1 March 2020?
Bartier Perry
Article explains the changes to salary laws, the new obligations and what employers need to do.
Casual employment risks continue
McCullough Robertson
Employers should continually review arrangements with casual employees, for any changes in the employment relationship.
FREE News Alerts
Sign Up for our free News Alerts - All the latest articles on your chosen topics condensed into a free bi-weekly email.
Register For News Alerts
Article Tags
Australia Employment and HR Retirement, Superannuation & Pensions Finance and Banking Financial Services
Fund Management/ REITs
More Tags
Similar Articles
Powered by mondaq AI
MATCH
66%
Banking Royal Commission – managed investment funds under the spotlight Holding Redlich
Related Articles
ASIC relieves smaller not-for-profits and charities from whistleblower policy requirement Cooper Grace Ward
What Does The Future Hold? – The Changing Landscape For Employers In Australia Vincent Young
Annualised salaries: what are the options? Corrs Chambers Westgarth
FWC endorses approach to dismiss injured employee McCullough Robertson
Managing coronavirus (but not the kind you get after a big weekend) Marque Lawyers
Comparative Guides
Anti-Corruption & Bribery
Merger Control
Patents
Trademarks
Mondaq Advice Centres
Global
Investment Immigration
Global
Trademarks in SAARC Countries
More MACs