Kenya: A Decade Of Competition Regulation: Being Future Ready

Every year, in its annual report, the Competition Authority of Kenya discloses the number of cases that it has handled and the corresponding decisions made. If you analyze these cases and the resultant decisions, the trend of increased regulatory scrutiny coupled with the risk of imposition of financial penalties is apparent. The number of cases on curbing restrictive trade practices and enforcement of consumer protection have increased at an exponential rate since the Authority started reporting on these matters in 2012. Organizations that fail to take note this trend and address any latent risks from a competition law perspective are walking a tightrope. 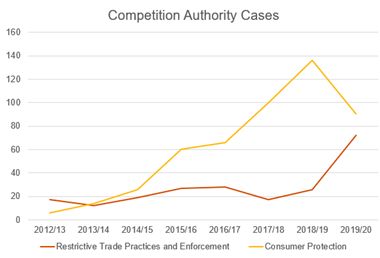 Further, the Authority which is now is celebrating its 10th anniversary of 'promoting and safeguarding competition in the national economy as well as protecting consumers from unfair and misleading market conduct', has over the years lobbied for changes to the Competition Act aimed at ensuring that the regulatory watchdog has a real bite.  The first of the key changes was aimed at winning over market players where a leniency program was introduced in 2014. Under the program, entities that voluntarily disclose restrictive trade practices can have their corresponding fines for non-compliance either fully or partially waived. The aim of the program is to foster collaboration between market players and the Authority while at the same time enhancing compliance with the Act.

Nonetheless, for those organizations that opt not to take up the leniency program, amendments were introduced in 2016 to de-link prosecution of offences under the Act by the Department of Public Prosecution with the financial penalties that can be meted by the Authority. In effect, the Authority now imposes fines more expeditiously and without reference to the office of the DPP. To demonstrate the impact of this change, for the year ended June 2021, fines imposed by the Authority rose by 34% compared to prior year to approximately 60 million Kenya Shillings. The 2016 amendments also clarified on the quantum of fines that can be imposed by the Authority with respect to prohibitions on restrictive trade practices, abuse of dominance and abuse of buyer power (up to 10% of the preceding year's gross annual turnover).

The 2016 amendments also clarified that the Authority can on its own motion or upon receipt of information commence investigations into consumer complaints. This has seen the number of consumer protection cases reported by the Authority rise from 6 in 2012/2013 to a high of 136 in 2018/2019. These cases are expected to rise even further with the Authority having recently rolled out a e-filing portal for consumer complaints and restrictive trade practices.

In 2019, a raft of changes were introduced primarily to refine the rules on abuse of buyer power. The Act now sets out a non-exclusive list of what constitutes abuse of buyer power including payment delays, unreasonable termination of contracts and demanding preferential terms that are unfavorable to suppliers. The amendments also give powers to the Authority to demand that industries or sectors where abuse of buyer power is likely to occur develop a binding code of practice. In accordance with these provisions, the Authority published the Retail Trade Code of Practice. The code contains provisions on fair and ethical dealing, mandatory supplier-retailer agreements, restrictions on delays in making payment among other terms that are intended to harmonize the supplier-retailer relationship and apply international best practice in their dealings. Based on the latest consumer complaints received by the Authority, there is talk of developing additional codes particularly with respect to the digital economy.

The Competition (General) Rules were also passed in 2019. The rules introduced meaningful thresholds in the application of merger control in Kenya. Whereas, at inception, the Act contained broad provisions on merger control such that the sale of a kiosk could be construed as a transaction requiring the Authority's approval, the rules set a floor of KES 500 million (in combined turnover / assets of the merging parties) below which a notification to the Authority is not required. As a result, the number of merger applications being considered by the Authority has significantly reduced. It is expected that with the freed-up resources, focus will shift to enforcement of restrictions on restrictive trade practices and dealing with consumer protection cases.

In light of the above, what does being 'future ready' from a competition law perspective look like? We advocate that organizations take the following steps: