United States: The Price Of "Nut Rage" And Four Other Things I'm Glad I Learned In 2019

by John Bostwick
Vistra
0 Liked this Article
To print this article, all you need is to be registered or login on Mondaq.com.

For the last half dozen years, we've published a year-end "best of" blog post summarizing our most notable articles. For a combination of dull reasons, we didn't do that at the end of last year. Most readers probably won't regard this hiatus as a great loss, but I thought it might be interesting to publish a similar post early this year, with a twist.

This article consists of five concepts or facts from the Vistra International Expansion blog that were new to me at the time we developed the posts, and that I still find interesting and valuable. Basically, it summarizes five things I'm glad I learned in 2019.

First let's look at some stats. In 2019, we published 52 blog posts. Based on a random sampling of 12 posts (one from each month), the average number of words per article was a little over 1,000. The total number of words published on the blog last year was about 54,000, which (according to one source) equates to about 215 pages in a typical published book. (I can vouch for that, since I read all the posts in preparation for drafting this piece.)

And now, here are the five things I'm glad I learned.

1. There's a little-known U.S. government report that captures the economic significance of international expansion and operations.

Last spring, James Clancy, one of my coworkers in Vista's Boston office, sent me a link to a CNBC video interview with Steve Liesman about something called U.S. foreign affiliate sales. I forwarded the link to Saul Howerton, and that ultimately led to Saul's article about top international expansion countries. The post also looks at the affiliate sales numbers Liesman discussed in the CNBC interview.

The original sales numbers are captured in a U.S. Department of Commerce Bureau of Economic Analysis (BEA) report. For someone who, like me, has worked in the international expansion and operations services industry for nearly seven years, the BEA report was a revelation. It's also something I'm genuinely surprised I'd never come across before. Essentially, the BEA sends mandatory surveys to U.S. multinational enterprises that have activities abroad. The surveys collect among other things information on sales made by foreign affiliates of U.S. parent companies.

One of the BEA reports based on those surveys is called "Sales by Country and Industry." The report shows that foreign affiliates took in $5.7 trillion in sales outside the U.S. during the most recent year data was collected. As Liesman observes in his interview, if this massive number were taken into account when calculating the U.S. trade deficit with China, that deficit would shrink almost to nothing.

The BEA report also effectively provides an authoritative list of top expansion target countries for U.S. multinationals. Perhaps surprisingly, China is only number five on that list. (Check out Saul's post for the full top 10 ranking.)

2. Multinationals shift profits to avoid paying taxes, and now I know how they do it.

In February, I edited a post by Tom Lickess, our global head of tax, about a UK law that became effective in April. It taxes income derived from intangible property (that is, intellectual property, or IP) held by non-UK resident entities in low-tax jurisdictions. The law looks to address profit shifting by multinationals and tax them where they actually engage in economic activity. The law is in line with the OECD's base erosion and profit shifting program, or BEPS.

None of this was new to me, or so I thought. Then Tom asked me to add a graphic illustrating his example of how a multinational group actually shifts profits and how the UK would tax those profits under the new law. The result is the graphic below, which I essentially drew on a napkin and gave to our stellar designer Neal Fassnacht, who cleaned it up. 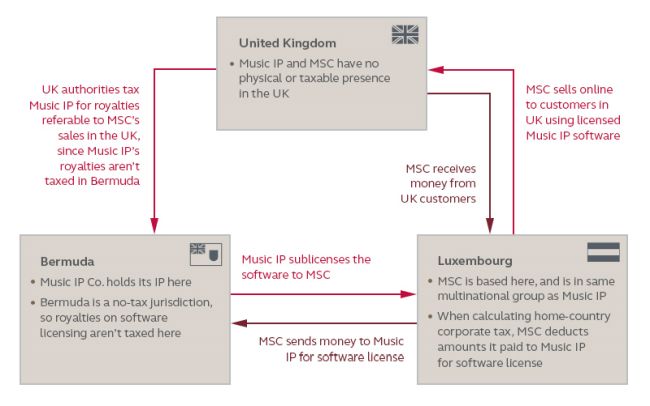 The above scenario involves a hypothetical company called Music IP, which holds its intellectual property in Bermuda. Music IP is related to the company MSC, which sells access to Music IP's software. Until working on the graphic, I'd never firmly grasped — even at a high level — this method of shifting profits to avoid taxation. If my brief description and the graphic above don't cause the scales to fall from your eyes, read Tom's post.

We published four interview blog posts with Vistra experts in 2019. One of our subjects was Caroline Baker, Vistra's managing director of the Alternative Investments division for Asia. She discussed venture capital trends around the world, and one of her observations struck me as particularly compelling. Here's the passage in full: "Being in Asia, we have really seen the [venture capital] landscape shaped by China. The opportunity in that market is incredible, but it's also remarkable the way that China has entered other Asian countries. The amount of money invested is obviously transformative, but they also bring their own way of doing business. We have had to be cognizant of how to work with Chinese investors and embrace their way of operating."

The idea that a business must be sensitive and adapt to the cultural expectations of its deep-pocketed customers is not a new one. (One example of this kind of thing is how Chinese restaurant owners in the U.S. changed their recipes to make them more palatable to Americans.) Until reading Caroline's comment about "embracing" Chinese investors' "way of operating," I'd never considered how Chinese cultural expectations must have transformed the venture capital landscape over the last decade or so. That transformation must be profound, given that China has invested nearly $2 trillion abroad since 2005.

I won't pretend to know how all the various kinds of trust accounts work across all industries. Thanks to Eugenia Vlas-Wright's " Why you should consider trust accounts when expanding abroad," though, I'm confident I now know how and why international expansion providers use trust accounts on behalf of their clients.

If you're expanding internationally, you may be able to set up a trust account or multiple trust accounts with a third-party provider to make tax-withholding, payroll and certain other payments. It's a little like your mortgage company paying your real estate taxes on your behalf. But in this case, you'll pay your international expansion provider in your home currency, and they'll in turn fund individual trust accounts in other currencies, which they'll use to make payments for you in other countries.

Trust accounts, then, can simplify the process of making ongoing payments to keep your international operations going. They can also in some cases eliminate the comparatively long and burdensome process of setting up bank accounts in other countries. Finally, trust accounts typically offer excellent exchange rates, since the companies that offer them deal in volume.

If you're remotely interested in this subject, read Eugenia's post. I know of no other article that so clearly describes what these kinds of trust accounts are and how they work.

5. The price of the "nut rage incident" was steep.

When first reading a draft of Suzie Woodcock's post on Korean anti-bullying legislation, I laughed out loud at a passage describing something known as the "nut rage incident." While there are comic elements to the story, it highlights the serious, global problem of workplace bullying.

It occurred in 2014 and involves the former vice president of Korean Air, who was also the CEO's daughter. While waiting for the flight to take off, she was triggered by being served macadamia nuts in a bag instead of a porcelain bowl. Enraged, she demanded the flight crew return the plane to the gate so the offending flight attendant could be kicked off.

In the end, the flight attendant was awarded over USD$300,000 in a civil suit, and the enraged VP actually did five months in prison. That's no laughing matter obviously, but few workplace bullying victims could dream of such a favourable outcome.