Luxembourg: Patents That Will Help You Haunt This Halloween!

On Halloween, great ideas come in all shapes and sizes. Pint-sized kids walk the neighborhoods in costumes that range from scary to funny to heroic. Candy fills treat bags and buckets shaped like monsters, ghosts and pumpkins. Front yards are full of Styrofoam graveyards, strobe lights, fog machines and life-sized skeletons rising from animated coffins. Behind many of these great and spooky ideas, there is a patent.

You may think that patents are the least-fun part of the year's most terrifying holiday, but Halloween-themed patents can actually make for entertaining reading. We picked out some of our favorites below.

"A face with glowing eyes returns stare or blinks at onlookers."

This patent, filed on October 11, 2002, protects a simple invention: Halloween props fitted with LED lights, which "may include complete (if often somewhat decayed or devoured) figures with glowing eyes. The LED's may burn steadily, staring unnervingly at onlookers. Alternately, they may blink or wink with cunning." These "haunting aids" promise to solve the problem of overpriced Halloween decor. "Unfortunately, one needs to be a grave robber in order to afford the lit-up props available today," the description says. Fortunately, "the main cost [of the haunting aid] to consumers comes in terms of lost sleep." Do not think the idea needs to be pigeonholed into spooky characters alone, though — the abstract is quick to note that the technology can also be used for "less sinister purposes."

"The invention may even be useful in producing mass-hysteria," it adds. You know, just in case you need a little mass-hysteria in your holiday. And, do not worry, "The heads need not be dismembered." 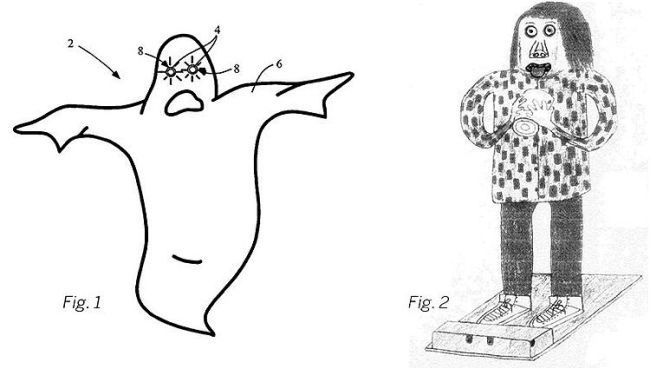 Most patents — Halloween or otherwise — make for pretty dry reading, and the Haunting Aid is the exception rather than the rule. But some patents are so bizarre that they entertain without even meaning to, like this "life size Halloween novelty item."

Halloween is a time for scary costumes and decor, and some of those items can be gross, too. Who does not love to see decaying corpses walking the streets with their bowels hanging out of crude abdominal incisions? Besides everyone under the age of 13. Some lines just should not be crossed, although this inventor begs to differ.

"Accordingly, there is a need for an affordable easy to use foldable Halloween novelty item that can expel fluid intermittently from a pair of tongue orifices into a detachable bucket that the Halloween item appears to be holding further using a removable, and refillable fluid jug assembly capable of utilizing gravity to expel the fluid." First of all, ew. And second of all, is there a need for that? 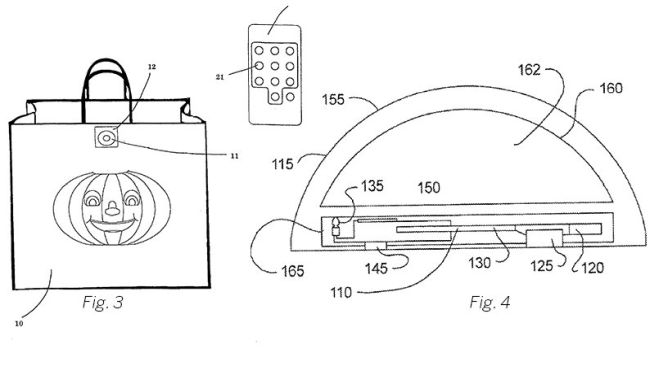 Fig. 3: An educational invention at heart, the "Halloween greeting system" was designed to remind young children to say "trick or treat" and "thank you. Fig. 4: On the other hand, the "Device for fanciful detection of ghosts" identifies various paranormal phenomena through the exploitation of Hall Effect (sources: Google Patents).

Trick-or-treaters who forget to say "thank you" are a thing, but is it a problem that needs a high-tech solution? Apparently, yes! "A solution ... is to have the parent or chaperone remind / tell the child what the child should say. However, this solution can be tiring for the parent / chaperone, as a lot of repetition is typically involved. Also, the parent might find the child is not within earshot range, and several other children surround the child. Thus, it might be difficult for the parent to get the child's attention or for the child to hear the parent. Therefore, there is a need for a product that helps solve the above problems."

The answer? A trick-or-treat bag that plays a pre-recorded message (presumably, "trick-or-treat" and "thank you") that parents can engage remotely, thus eliminating the need for the child to say anything at all. This device is supposed to teach good manners to the child who is using it, but we all know how that will probably work out.

The patent that never was

Even the greatest inventors do not always make it as far as an actual patent. Thomas Edison filed more than 1,000 patents, but sadly, his "spirit phone" was not one of them. Like many of his contemporaries, Edison believed that the spirit transcended death, and that science would eventually find a way for the earthly realm to communicate with the spiritual one. He thought the human soul was made from tiny, atom-like particles that would remain after death, and that they could be recorded in the same way that a phonograph can record a human voice.

Edison's spirit phone did not have a formal name, though he called it a "valve" since it was susceptible to vibrations. In drawings, it looked vaguely similar to a phonograph, but as far as we know, Edison never actually built or tested the device, and he never filed a patent for it, either. His decision probably set back the ghost-hunting reality television genre by a decade or two. 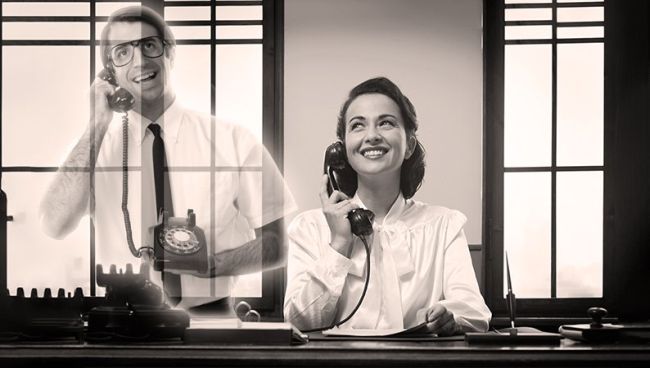 In October 1920, Thomas Alva Edison announced that he was working on an electronic device that will facilitate communication with the dead. Unfortunately, the device was not ready before his death in 1931, and no plans were left behind.

"Device for fanciful detection of ghosts"

There is good news for amateur ghost hunters, though: Thomas Edison was not the last guy to try building a spirit communication or ghost-detecting device. Some of these devices got through the patent process, too, although their inventors do not always seem to take their own inventions too seriously.

This patent for a "device for fanciful detection of ghosts" is careful to describe the invention as "a toy, a curio, or a trinket." "The imaginations of those perceiving said events might then relate them to the presence of ghosts and creatively concoct and act out scenarios based on said suppositions." In other words, believer's are going to believe but the U.S. Patent and Trademark Office doesn't have to.

Patents can range from the ingenious to the ridiculous, but whatever their subject, there is no doubt that the patent process makes it possible for innovation to happen around the world.

Patents benefit everyone, not just the inventors who file them. Without the patent process, your choices for Halloween costumes, ingenious decor, spooky accessories and even life-sized Halloween novelty items would be limited.

ARTICLE TAGS
Luxembourg Intellectual Property Patent
POPULAR ARTICLES ON: Intellectual Property from Luxembourg
Cyprus – The Ideal IP Holdings Jurisdiction
Kinanis LLC
The Cyprus IP Box Regime applies on Qualifying IP's which are developed after the 1st of July 2016.
EU Trade Marks And Brexit
Michael Kyprianou Advocates & Legal Consultants
The UK officially left the EU on 31 January 2020. With the Withdrawal Agreement ratified by both the UK Parliament and the European Parliament, the UK will enter into an eleven-month transition period ...
The Top 10 Rules Of Intellectual Property Docketing
Dennemeyer Group
Intellectual Property docketing, which is the management of essential dates, data and documentation from IP offices, as well as the tracking of crucial deadlines during the application process, is often viewed as an afterthought.
Patents Rights In Developing Countries: Exceptions
STA Law Firm
Intellectual Property Rights (IPRs) have never been more economically and politically important than they are today.
Patent Law's Approach To AI: Finding The Way Forward
Dennemeyer Group
Artificial intelligence existed mostly as a theory for the first few decades after the term's coining at a 1956 Dartmouth University conference.
The Steps In Patent Registration In The UAE
STA Law Firm
Inventing something new, including a new process or a novel item is often the first step in developing a company and launching a brand-new opportunity for an individual or a group
FREE News Alerts
Sign Up for our free News Alerts - All the latest articles on your chosen topics condensed into a free bi-weekly email.
Register For News Alerts
Article Tags
Luxembourg Intellectual Property Patent
Related Articles
The Top 10 Rules Of Intellectual Property Docketing Dennemeyer Group
Greatest Inventions To Watch For In 2020 Dennemeyer Group
Patent Law's Approach To AI: Finding The Way Forward Dennemeyer Group
Bracing For Brexit's Effects On International IP Dennemeyer Group
Who Gets To Set Global FRAND Rates For SEPs? Dennemeyer Group
Comparative Guides
Corporate Tax
FinTech
Mondaq Advice Centres
Global
Investment Immigration
Global
Trademarks in SAARC Countries
More MACs