by Elvinger Hoss & Prussen
ELVINGER HOSS PRUSSEN, société anonyme
0 Liked this Article
To print this article, all you need is to be registered or login on Mondaq.com.

The Bill of Law 7431 ("Bill") introduced by the Luxembourg government on 11 April 2019 implements the European Union ("EU") Directive 2017/1852 dated 17 October 2017 on tax dispute resolution mechanisms in the EU (the "Directive"). The Directive meets the BEPS Action Plan 14 minimum standards and is a subsidiary to the mandatory binding arbitration clause of the Multilateral Instrument1 (if applicable). The objective of the Directive is to provide an efficient resolution mechanism for disputes arising between EU Member States regarding the interpretation and application of agreements and conventions that provide for the elimination of double taxation of income and, where applicable, capital ("Resolution Mechanism")

The Bill incorporates the content of the Directive to a greater extent.

The effectiveness of the Resolution Mechanism relies on strict deadline periods in each procedural phase and on an obligation for the Members States to reach a solution.

A Luxembourg and/or EU tax resident affected person may file a complaint before the Administration des Contributions Directes ("ACD") and the other relevant competent tax authority(es) involved ("CTA") simultaneously2 against the question in dispute which lead to a double taxation.3. The filing must be done within three years from the receipt of the first notification of the action resulting in, or that will result in the dispute4. The ACD must acknowledge receipt of the complaint and inform the CTA of such receipt within two months5.

The outcome of the Resolution Mechanism essentially depends on the ACD's and CTA's decisions on the admission or rejection.

Scenario 1: Both the ACD and the CTA accept the complaint

The ACD has two options to resolve the question in dispute: either on a unilateral resolution or by mutual agreement.

The ACD may decide to resolve the dispute on a unilateral basis, without involving the CTA, within six months from the receipt of the complaint or from the receipt of additional specific information (whichever is later)9. The ACD's decision must be notified to the affected person and to the other CTA involved, following which the Resolution Mechanism is terminated.

Alternatively, the ACD shall endeavour to resolve the dispute with the CTA involved by mutual agreement within 2 years, starting from the last notification of the acceptance of the complaint by a decision of the ACD or the CTA. The 2-years' timeframe may be extended by up to 1 year at the request of a CTA upon written justification. Once the CTA have reached a mutual agreement as to how to resolve the dispute, they must notify this agreement to the affected person through an enforceable decision which binds the ACD, without delay10.

If no mutual agreement is reached within 2 or 3 years, the affected person may require the ACD to join together with the other CTA involved, and form an advisory commission notably composed of an independent person of standing, called to deliver an opinion on how to resolve the question in dispute11. The request for such an advisory commission must be filed within fifty days12 from the notification13 of the failed attempt to reach a mutual agreement to the affected person. As an alternative to the advisory commission, the ACD and the CTA may create an alternative dispute resolution commission or committee with their own rules of composition and functioning, the latter remaining subject to the requirements of Article 12 (costs of proceedings) and Article 13 (information, evidence and examination) of the Bill unless agreed otherwise14.

Scenario 2: The complaint has not been accepted by the ACD

The ACD may decide to reject the complaint if the latter does not meet the legal admissibility requirements.

In this case, the affected person has two options (independently of the CTA's decision on the admission or rejection of the complaint) either they can lodge an amendment appeal (recours en reformation) or they can request that an advisory commission be set-up.

On the one hand, the affected person can lodge an amendment appeal (recours en reformation) against the ACD's rejection of the complaint with the Luxembourg Courts in accordance with the Law of 7 November 1996 on organisation of the administrative courts of law15.

(ii) The Courts overturn the ACD's decision: Should the final ruling of the Courts accept the complaint, the ACD may decide to endeavour to resolve the dispute either (i) by reaching a mutual agreement if the CTA have also accepted the complaint, or (ii) by setting-up an advisory commission upon the request of the affected person if not for the purpose of analysing the admission or rejection of the complaint23.

b) Requesting the set-up of an advisory commission

Scenario 3: The complaint has been accepted by the ACD but not the CTA

The ACD may resolve the dispute on a unilateral basis. If not, the affected person could request that an advisory commission be set-up. In this case, the above-mentioned procedure (Scenario 2, (i) applies mutatis mutandis.

In all the cases, and subject to the affected person's acceptance, the mutual agreement or the opinion of the advisory commission on how to resolve the dispute, as the case may be, constitutes a definitive binding decision on the ACD and the CTA unless they reach an agreement on a different decision.

A special commissioner may be instructed by the Luxembourg Courts to ensure the effective execution of the definitive decision. The definitive decision, the publication of which is mandatory, enables the ACD to issue rectified tax assessments, including where the limitation period (délai de prescription) has expired.

The Resolution Mechanism is without prejudice to any recourse introduced against the initial decision that caused the dispute under the ordinary administrative and judicial procedures applicable in tax matters. The decision resulting from the Resolution Mechanism will only become binding and enforceable once the affected person has taken action to terminate those proceedings and/or has renounced to any other remedies.

The Bill foresees an application of the Resolution Mechanism to any complaint filed as from 1 July 2019 regarding fiscal year 2018.

Please find hereafter the chart summarizing the various scenarios arising from the Resolution Mechanism (also available for download at the bottom of the page). 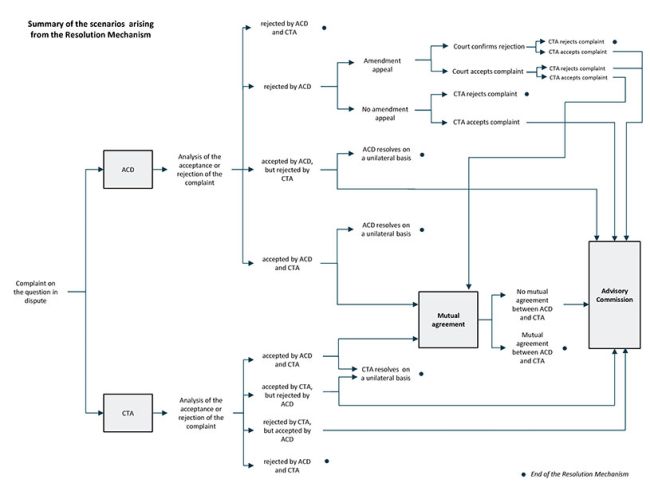 1. Multilateral Convention to Implement Tax Treaty Related Measures to Prevent BEPS. The law on the ratification of the MLI into Luxembourg domestic tax law was voted on 14 February 2019. See our Newsletter May 2019 for more information.

2. Unless the affected person is an individual or is not a large undertaking and does not form part of a large group, as defined by Article 17 of the Directive.

3. The Bill defines double taxation as the taxation of income or capital by two or more Member which gives rise to either: (i) an additional tax charge; (ii) an increase in tax liabilities; or (iii) the cancellation or reduction of losses that could be used to offset taxable profits.