All advertising of alcoholic beverages in North Carolina must comply with the Alcoholic Beverage Control ("ABC") Commission's rules and the Commission has the authority to regulate alcohol advertisements that are "contrary to the public interest." § 18B-105(a)-(b). One rule that has recently been under attack states that alcohol advertisements shall not contain any design that "depicts the use of alcoholic beverages in a scene that is...undignified, immodest, or in bad taste." 14B N.C. Admin. Code 15B.1003(a)(2). The recent case of Flying Dog Brewery, LLC v. N.C. Alcoholic Beverage Control Commission concludes that the law sweeps far too broadly to achieve North Carolina's "substantial interest" in the public, making it facially unconstitutional.

"Freezin' Season" Gets Struck Down by the Commission

In June 2021, Flying Dog Brewery sent samples of the label for its "Freezin' Season Winter Ale" beer to the ABC Commission for its approval. The label contained "a nude cartoon figure standing next to a campfire." The Commission rejected the label, citing 14B N.C. Admin. Code 15B.1003, and stated that the label was in "bad taste" and contained an inappropriate image. 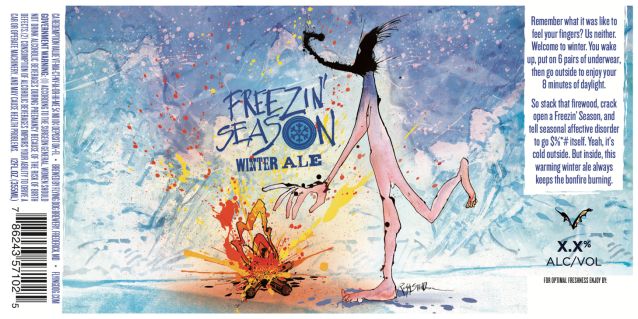 In response, Flying Dog filed a complaint that alleged that the rule violated the First Amendment of the Constitution because it "is invalid on its face as an unconstitutional prior restraint on protected expression, is invalid on its face as inherently vague and ambiguous, and is invalid as applied to bar the advertisement and sale of Freezin' Season Winter Ale where defendants lack any valid interest which would justify censorship of...[the] label."

The Commission countered that North Carolina has a substantial interest in "protecting children from exposure to vulgar language and speech that is sexually profane." They further contended that the rule protects children from being "ambushed" by vulgar and explicit alcoholic beverage labels while shopping with their parents.

Next, the Court had to evaluate whether the commercial speech was protected by the First Amendment citing that commercial speech is protected from "unwarranted governmental regulation." To determine whether regulations are unwarranted, courts have to assess whether there is a substantial government interest that is "directly advanced by the challenged regulation" and whether "the regulation is more extensive than is necessary to serve the state's interest." The Flying Dog Court found that there is a substantial governmental interest in "preventing parents and children from being surprised by sexually explicit...beer labels," however, the regulation allowing the Commission to deny a product label that "depicts the use of alcoholic beverages in a scene that is determined by the Commission to be undignified, immodest, or in bad taste" is simply too broad. As such, the regulation was "unwarranted" and not narrowly tailored, so the commercial speech was protected.

In conclusion, as written artfully by Judge Boyle, "while the ABC Commission may regulate alcoholic beverage labeling beyond the limits of the definition of obscenity," it must do so in a manner that is narrowly tailored to achieve a substantial government interest. Moving forward, it will be interesting to see how the Commission handles its label review and whether it amends the rule so that it is "narrowly tailored" or whether it amends its review process to consider impairment of manufacturers' commercial speech.

The Nexsen Pruet Alcohol Permitting and Licensing team is experienced in navigating the rules of the ABC Commission. Contact us to discuss your next project.