India: Impact Of COVID-19 On The Manufacturing Sector In India

Most Popular:  Article India, July 2021
To print this article, all you need is to be registered or login on Mondaq.com.

COVID-19 put an immediate halt to many business activities across the globe, as several countries had shut down their ports, airports and domestic transportation while imposing nation-wide lockdowns, leading to a disturbance in business and civil life. The lockdown in India impacted manufacturing activities across the globe. India took special measures to control the spread by imposing one of the longest lockdowns in the world, to cushion the scarce availability of healthcare resources. The enormity of the lockdown affected manufacturing activities and supply chains alike, disrupting the overall economy.

While India recovered fairly from the first wave, the second wave has hit the country the hardest in terms of fatalities. The second wave has led to further State-imposed lockdowns, impacting the economy while putting several restrictions in place on key businesses. This was followed by a slowdown in labor-intensive industries involving manufacturing, real estate, construction, and infrastructure, on account of the reduced labor availability during this period. With learnings from the first wave, the country used its experience to combat the effects of the second wave. Strategic lockdowns and easing up of the same have helped numerous States curb the spread of infection while providing the industry with considerable regulatory initiative to restore normalcy. With proactive measures, the country is slowly and steadily fighting against the insurgent second wave

India's role in the post-COVID-19 era, particularly in the industrial sector, is a subject of great interest, hope, and speculation to the rest of the world.

Impact of the first and second wave

India's manufacturing sector had gone through various phases of development in recent times. The sector contributes to approximately 16-17% of the GDP and provides employment to almost 20% of the country's workforce. During the first wave of the pandemic, lockdown-imposed restrictions on the movement of goods and people severely impacted workforce capacity and disrupted supply chains, bringing nearly all manufacturing activity to a stand-still.

The key issues impacting the manufacturing sector are listed in the image below: 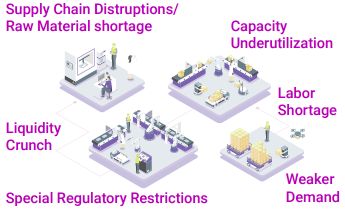 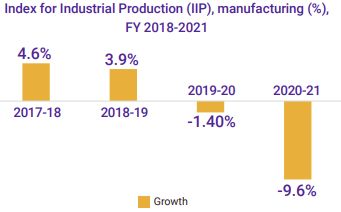 During the pandemic, several economies understood that diversification is a key factor for mitigating their risk as many players relocated their businesses to other business hubs. The Indian Government provided relief measures in the form of logistical support, the Essential Commodities Act, and covid-linked passes which helped ease the day-to-day operations of multiple stakeholders. The situation improved gradually and confidence towards the business outlook for production rose as a phased reopening of the economy was announced. A positive outlook was witnessed in the manufacturing sector after the stabilization of the first wave due to an easing in COVID-19 restrictions and the resuming of full-time work in factories, which was supported by a surge in new work and exports.

In terms of the global economic scenario, several companies were seeking alternative sources of supply (Apple, Samsung, LG Electronics, Kia Motors, Hyundai Motor, Zoom, Hasbro, etc.). They waited to see the impact of the recent steps taken by the Indian Government on the performance of the sector in the short-, medium-, and long-term. However, with this recovery and subsequent gradual reopening of the economy, the country succumbed to a second wave of the virus as highlighted below.

A second wave was witnessed towards the end of the 2020 financial year. The country's optimistic recovery was thrust into further uncertainty as cases increased far more rapidly than the first wave. The fatality rate amongst individuals increased as several States introduced restrictions and curfews to mitigate the loss of life in the second wave. Healthcare infrastructure in the country faced a total collapse as citizens ran helter-skelter in search of beds, oxygen cylinders, and resources to survive the second wave.

This widespread devastation further instilled fear amongst the citizens as new variants proved to be more potent leading to a mass breakout in the Tier I cities and a surge in the rural regions. This led to individuals being confined to their homes, more out of choice and fear. The number of people working during the second wave was much smaller as compared to those working during the first wave, which translated to slower economic recovery. With lockdowns slowly being reimposed, States allowed certain relaxations and permissions to keep the economic impact to a minimum.

Small businesses and retailers bore the brunt of the initial impact of the second wave as they faced liquidity crunches and stretched working capital. It is expected that once the second wave stabilizes, businesses will see 70% of pre-covid revenue. Healthcare infrastructure was the most impacted as systemic issues led to an inability to accommodate the exponential rise in cases during the second wave.

This led to strengthening of hospital networks throughout the country and a special focus on digital health through the National Health Mission and the National Digital Health Blueprint, resulting in inclusion of healthcare services to even the most inaccessible areas.

While the second wave is expected to upset economic growth, the overall impact is expected to be moderate as businesses and States have adjusted their businesses and cycles to the COVID situation prevalent. The manufacturing PMI remained unchanged in April 2021 compared to March levels of 55.4. However, eightmonth lows were witnessed for manufacturing orders through April and May. Fuel demand volatility was also experienced due to the demand for Petrol declining by 6.3%, whereas demand for diesel declined by 1.7%. A few large auto players recorded a sales decline of nearly 9% in April as compared to March. As the sector witnessed a moderate impact, an economic recovery is expected, however, it may not be 'V-shaped' such as the recovery post the first-wave.

Manufacturing is expected to pick up activity in the second quarter after core sector production begins to reach the levels of early-March 2020.

A substantial vaccination drive with bulk production and administration is underway in India with nearly 3% of the population completely inoculated. Nearly 186 million doses were given resulting in 41.1 million people fully vaccinated. Age groups within the range 18-44 can now book vaccinations which is aimed at vaccinating nearly 90% of the Indian workforce. Furthermore, the financial impetus provided to vaccine makers and emergency usage vaccines promise a bright future in terms of a fully vaccinated population, which will significantly contribute to higher levels of productivity. Opportunities to upgrade health infrastructure - from government and private players - have been consistently in the pipeline along with rapidly-scaling infrastructure for medical services in unreachable sections. An economic stimulus package is expected from the central bank to provide relief to small businesses and support services. Manufacturing is expected to pick up activity in the second quarter after core sector production begins to reach the levels of early-March 2020. Companies that have consolidated their business and organized their supply chains/processes are likely to have increased opportunities after the country recovers from the second wave. We expect ample opportunity to arise for those entities anticipating and planning their business efforts in line with the government's plans for a healthy economic recovery.