A taxpayer is subject to many types of taxes and the rules for each type of tax are laid out in a piece of legislation. In addition to the federal income taxes laid out in the Income Tax Act (the “ITA”) a taxpayer is subject to provincial taxes. One particular type of provincial tax in Ontario is called a land transfer tax which applies, generally, when land (situated in Ontario) is acquired or a beneficial interest in land (situated in Ontario) is acquired. This article will discuss a new type of land transfer tax that applies to residential property located in the Greater Golden Horseshoe Region (“GGH”) as defined by the Land Transfer Tax Act. This tax is called the Non-Resident Speculation Tax and applies in addition to the general land transfer tax in Ontario.

The Greater Golden Horseshoe Region: What is it?

A regional municipality is denoted as “RM”. 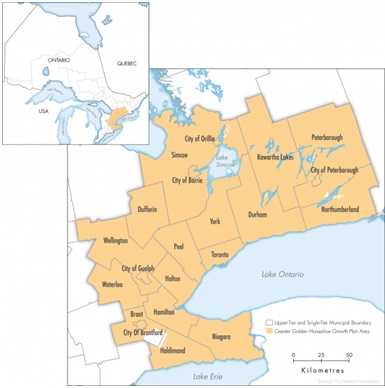 The GGH is approximate 32,000 km2 and is an urban area in southern Ontario. The GGH is made up of the following cities, counties, and regional municipalities:

The land transfer tax changes were laid out in the Budget Measures Act (Housing Price Stability and Ontario Seniors’ Public Transit Tax Credit), 2017. The changes received royal assent as of June 1, 2017 and have since come into force. The Non-Resident Speculation Tax is a product of changes made to the existing Land Transfer Tax Act.

Pursuant to the changes, an additional tax will be paid by every person who, on or after April 21, 2017, tenders for registration in Ontario a conveyance by which any designated land that is located within the specified region (the GGH) is conveyed to a foreign entity or a taxable trustee. The tax is 15% of the value of the consideration for the conveyance or an alternate rate of tax as prescribed by the Minister of Finance (the “Minister”). The tax is to be paid when the conveyance is tendered or before the conveyance is tendered for registration. In general terms, the rules impose a 15% tax on the consideration paid for land transfers of any designated land in the specified region to a foreign entity or taxable trustee.

The tax does not apply to all land transfers. Currently, as the Minister has the power to change the definition of “designated land,” the tax only applies to land that contains one to six single family residences.

The terms “foreign entity” and “taxable trustee” also have definitions assigned to them by the legislation and will be explained in further detail below.

The tax applies to conveyances made to a foreign entity or a taxable trustee. A “foreign entity” means a foreign corporation or a foreign national. The definition of a “foreign national” for the purposes of this tax is taken from subsection 2(1) of the Immigration and Refugee Protection Act (Canada) and means a person who is not a Canadian citizen or a permanent resident.

In the definition of “foreign corporation” the term “controlled” has the meaning assigned to it by section 256 of the ITA.

Depending on the facts surrounding the conveyance, determining whether the Non-Resident Speculation Tax tax applies may require a detailed analysis of any corporations or trustees that are transferees.

Ontario Regulation 182/17 Tax Payable under Subsection 2(2.1) of the Act by Foreign Entities and Taxable Trustees made under the Land Transfer Tax Act currently provides for exemptions from the Non-Resident Speculation Tax. The exemptions exist for “nominees,” “protected persons,” and for conveyances to a foreign national and spouse.

Each of the three exemptions has different conditions that must be met; however, all exemptions require the transferee or transferees to occupy the land transferred as their principal residence.

Getting the tax back: Rebate Initiative

In addition to the two necessary conditions above, a third condition must also be met:

Depending on your situation, it may be difficult to determine whether the Non-Resident Speculation Tax applies to you. Even if you determine that the tax does apply, there are other elements of the regime to consider.

While there are no breaks for conveyances to foreign corporations whether an exemption or rebate applies is something that should be considered by foreign nationals. In addition, applications to the Minister for rebates must be made within certain time limits and must set out all the information the Minster requires to determine whether the applicant is eligible for the rebate.

If you are considering making a conveyance in southern Ontario and you are unsure whether the Non-Resident Speculation Tax applies, contact one of our expert Canadian tax lawyers to discuss whether you must pay the tax, are exempt, or qualify for one of the rebates.

Take Note
This document is not intended to create an attorney-client relationship. You should not act or rely on any information in this document without first seeking legal advice. This material is intended for general information purposes only and does not constitute legal advice. If you have any specific questions on any legal matter, you should consult a professional legal services provider.
ADVICE CENTRE TAGS
Canada Provincial Taxation Changes to OBCA
FREE News Alerts
Sign Up for our free News Alerts - All the latest articles on your chosen topics condensed into a free bi-weekly email.
Register For News Alerts
Practice Guide Tags
Canada Provincial Taxation Changes to OBCA
Related Guides
NRST Foreign National Worker's Rebate
Non-Resident Withholding Tax – Interest Income – A Toronto Tax Lawyer Analysis
Ontario Non-Resident Speculation Tax
EHTA & Employee v Contractor
Changes to Ontario Business Corporations Act and the New Forfeited Corporate Properties Act
Meet More Experts