The Article 4 of Law on the Protection of Competition No. 4054 (the “Competition Law”) prohibits all agreements between undertakings, decisions by associations of undertakings and concerted practices that have (or may have) as their object or effect the prevention, restriction or distortion of competition within a Turkish product or services market or a part thereof. Whether the agreement is a legally valid or binding agreement is irrelevant as to the assessment under competition laws. The Competition Law prohibits both binding freewill agreements and non-binding reciprocal relations, to the extent that they have the object or effect of restricting competition.

The term “agreement” is interpreted broadly to comprise: (i) any form of coordination which is legally valid and binding and (ii) all reciprocal intent statements not having the characteristics of a legal or formal agreement. Examples include but are not limited to gentlemen's agreements, reciprocal statements, information exchanges concerning competition-sensitive topics, commitments, situation appraisal memoranda and cooperative statements.

Broadly speaking, restrictive agreements can be divided into horizontal and vertical agreements: 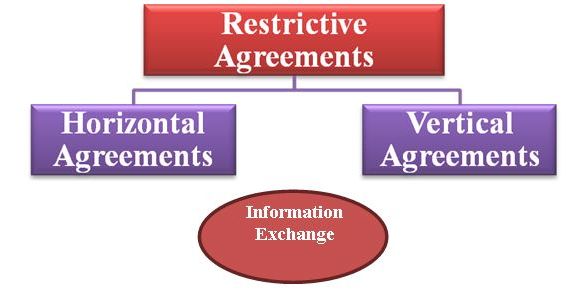 Even though information exchanges do not per se constitute a restrictive agreement, exchanging the following types of information may result in a violation of Article 4 of Competition Law , similar to horizontal and vertical agreements.