United States: Developments In The Defense Of Financial Institutions – The International Reach Of The U.S. Money Laundering Statutes

Our clients frequently inquire about precisely when U.S. money laundering laws provide jurisdiction to reach conduct that occurred outside of the United States. In the past decade, U.S. courts have reiterated that there is a presumption against statutes applying extraterritorially,1 and explicitly narrowed the extraterritorial reach of the Foreign Corrupt Practices Act ("FCPA")2 and the wire fraud statute.3 But the extraterritorial reach of the U.S. money laundering statutes—18 U.S.C. §§ 1956 and 1957—remains uncabined and increasingly has been used by the U.S. Department of Justice ("DOJ") to prosecute crimes with little nexus to the United States. Understanding the breadth of the money laundering statutes is vital for financial institutions because these organizations often can become entangled in a U.S. government investigation of potential money laundering by third parties, even though the financial institution was only a conduit for the transactions.

1. The U.S. Money Laundering Statutes and Their Extraterritorial Application

In 1980, now-Judge Rakoff wrote that "[t]o federal prosecutors of white collar crime, the mail fraud statute is our Stradivarius, our Colt 45, our Louisville Slugger, our Cuisinart—and our true love."4 In 2020, the money laundering statutes now play as an entire string quartet for many prosecutors, particularly when conduct occurs outside of the United States.

Title 18, Sections 1956 and 1957 are the primary statutes that proscribe money laundering. "Section 1956 penalizes the knowing and intentional transportation or transfer of monetary proceeds from specified unlawful activities, while § 1957 addresses transactions involving criminally derived property exceeding $10,000 in value." Whitfield v. United States, 543 U.S. 209, 212-13 (2005). To prosecute a violation of Section 1956, the government must prove that: (1) a person engaged in a financial transaction, (2) knowing that the transaction involved the proceeds of some form of unlawful activity (a "Specified Unlawful Activity" or "SUA"),5 and (3) the person intended to promote an SUA or conceal the proceeds of an SUA.6 And if the person is not located in the United States, Section 1956 provides that there is extraterritorial jurisdiction if the transaction in question exceeds $10,000 and "in the case of a non-United States citizen, the conduct occurs in part in the United States."7 The word "conducts" is defined elsewhere in the statute as "includ[ing] initiating, concluding, or participating in initiating, or concluding a transaction."8 Putting it all together, establishing a violation of Section 1956 by a non-U.S. citizen abroad requires: 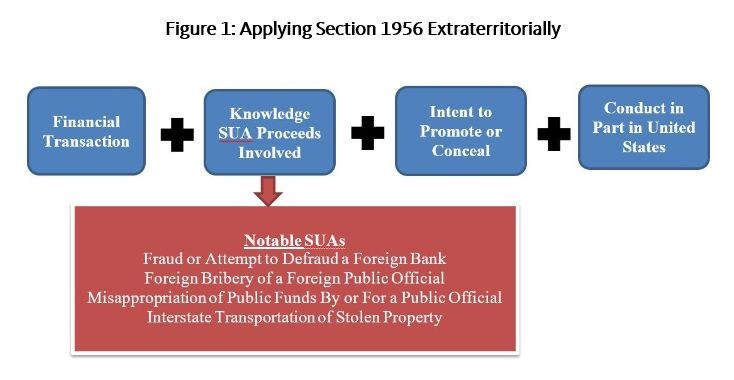 a. "Financial Transaction" and Correspondent Banking

In addition to broadly interpreting "financial transaction," DOJ also has taken an expansive view of what constitutes a transaction occurring "in part in the United States"—a requirement to assert extraterritorial jurisdiction over a non-U.S. citizen.14 One area where DOJ has repeatedly pushed the envelope involves correspondent banking transactions.

Correspondent banking transactions are used to facilitate cross-border transactions that occur between two parties using different financial institutions that lack a direct relationship. As an example, if a French company (the "Ordering Customer") maintains its accounts at a French financial institution and wants to send money to a Turkish company (the "Beneficiary Customer") that maintains its accounts at a Turkish financial institution, and if the French and Turkish banks lack a direct relationship, then often those banks will process the transaction using one or more correspondent accounts in the United States. An example of this process is depicted in Figure 2. 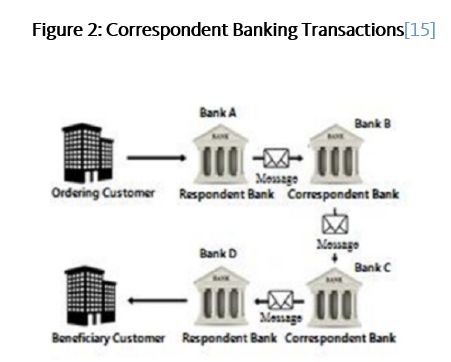 Given the continued centrality of the U.S. financial system, when confronted with misconduct taking place entirely outside of the United States, federal prosecutors are often able to identify downstream correspondent banking transactions in the United States involving the proceeds of that misconduct. On the basis that the correspondent banking transaction qualifies as a financial transaction occurring in part in the United States, prosecutors have used this hook to establish jurisdiction under the money laundering statutes. Two notable examples are discussed below.

The Prevezon Holdings case confirmed DOJ's ability to use correspondent banking transactions as a jurisdictional hook for conduct occurring overseas. The case arose from an alleged $230 million fraud scheme that a Russian criminal organization and Russian government officials perpetrated against hedge fund Hermitage Capital Management Limited.18 In 2013, DOJ filed a civil forfeiture complaint alleging that (1) the criminal organization stole the corporate identities of certain Hermitage portfolio companies by re-registering them in the names of members of the organization. Then, (2) other members of the organization allegedly filed bogus lawsuits against the Hermitage entities based on forged and backdated documents. Later, (3) the co-conspirators purporting to represent the Hermitage portfolio companies confessed to all of the claims against them, leading the courts to award money judgments against the Hermitage entities. Finally, (4) the representatives of the purported Hermitage entities then fraudulently obtained money judgments to apply for some $230 million in fraudulent tax refunds.19 DOJ alleged that this fraud scheme constituted several distinct crimes, all of which were SUAs supporting money laundering violations. DOJ then sought forfeiture of bank accounts and real property allegedly traceable to those money laundering violations.

The parties challenging DOJ's forfeiture action (the "claimants") moved for summary judgment on certain of the SUAs, claiming that those SUAs, including Interstate Transportation of Stolen Property ("ITSP," 18 U.S.C. § 2314), did not apply extraterritorially. The district court rejected claimants' challenge to the ITSP SUA. The court held that Section 2314 does not, by its terms, apply extraterritorially.20 Nevertheless, the court found the case involved a permissible domestic application of the statute because it involved correspondent banking transactions. Specifically, the court held that "[t]he use of correspondent banks in foreign transactions between foreign parties constitutes domestic conduct within [the statute's] reach, especially where bank accounts are the principal means through which the relevant conduct arises."21 In support of this holding, the court described U.S. correspondent banks as "necessary conduits" to accomplish the four U.S. dollar transactions cited by the government, which "could not have been completed without the services of these U.S. correspondent banks," even though the sender and recipient of the funds involved in each of these transactions were foreign parties.22 The court also rejected claimants' argument that they would have had to have "purposefully availed" themselves of the services of the correspondent banks, on the basis that this interpretation would frustrate the purpose of Section 2314 given that "aside from physically carrying currency across the U.S. border, it is hard to imagine what types of domestic conduct other than use of correspondent banks could be alleged to displace the presumption against extraterritoriality in a statute addressing the transportation of stolen property."23

The December 2019 acquittal of a Lebanese businessman on trial in the Eastern District of New York marks an unusual setback in DOJ's otherwise successful efforts to expand its overseas jurisdiction by using the money laundering statutes and correspondent banking transactions.

Jean Boustani was an executive at the Abu Dhabi-based shipping company Privinvest Group ("Privinvest").24 According to prosecutors, three Mozambique-owned companies borrowed over $2 billion through loans that were guaranteed by the Mozambican government.25 Although these loans were supposed to be used for maritime projects with Privinvest, the government alleged that Boustani and his co-conspirators created the maritime projects as "fronts to raise as much money as possible to enrich themselves," ultimately diverting over $200 million from the loan funds for bribes and kickbacks to themselves, Mozambican government officials, and Credit Suisse bankers.26 According to the indictment, Boustani himself received approximately $15 million from the proceeds of Privinvest's fraudulent scheme, paid in a series of wire transfers, many of which were paid through a correspondent bank account in New York City.27

Boustani did not engage directly in any activity in the United States, and he filed a motion to dismiss arguing that, with respect to a conspiracy to commit money laundering charge, as a non-U.S. citizen he must participate in "initiating" or "concluding" a transaction in the United States to come under the extraterritorial reach of 18 U.S.C. § 1956(f).28 Specifically, he argued that "[a]ccounting interactions between foreign banks and their clearing banks in the U.S. does not constitute domestic conduct . . . as Section 1956(f) requires."29 In response, prosecutors argued that Boustani "systematically directed $200 million of U.S. denominated bribe and kickback payments through the U.S. financial system using U.S. correspondent accounts"30 and that such correspondent banking transactions are sufficient to allow for the extraterritorial application of Section 1956.

2 United States v. Hoskins, 902 F.3d 69 (2d Cir. 2018). Although the Second Circuit rejected the government's argument that Hoskins could be charged under the conspiracy and complicity statutes for conduct not otherwise reachable by the FCPA, id. at 97, he was nevertheless found guilty at trial in November 2019 on a different theory of liability: that he acted as the agent of Alstom S.A.'s American subsidiary. See Jody Godoy, Ex-Alstom Exec Found Guilty On 11 Counts In Bribery Trial, Law360 (Nov. 8, 2019), https://www.law360.com/articles/1218374/ex-alstom-exec-found-guilty-on-11-counts-in-bribery-trial.

13 Id. Ultimately, Ulbricht was convicted and his conviction was affirmed on appeal. See United States v. Ulbricht, 858 F.3d 71 (2d Cir. 2017). The Second Circuit did not address the district court's interpretation of the term "financial transactions" under Section 1956.

18 See generally Bill Browder, Red Notice: A True Story of High Finance, Murder, and One Man's Fight for Justice (2015). The alleged scheme was discovered by Russian tax lawyer Sergei Magnitsky, who was arrested on specious charges and died after receiving inadequate medical treatment in a Russian prison. In response to Magnitsky's death, the United States passed a bill named after him sanctioning Russia for human rights abuses. See Russia and Moldova Jackson–Vanik Repeal and Sergei Magnitsky Rule of Law Accountability Act of 2012, Pub. L. 112–208 (2012).