by
NERA Economic Consulting
0 Liked this Article
To print this article, all you need is to be registered or login on Mondaq.com.

The Securities and Exchange Commission (SEC) settled with 181 defendants in the third calendar quarter of 2009, compared to 160 in the previous quarter and 216 in the third quarter of 2008. With the end of the third quarter of 2009, the SEC's 2009 fiscal year came to a close. In its 2009 fiscal year ("FY 2009"), the SEC settled with 626 defendants, compared to 673 in fiscal year 2008.1 In this paper, we examine recent trends in SEC settlements, including a comparison of settlements with public companies versus settlements with individuals, an issue brought to the forefront by the recent rejection of the SEC's proposed settlement with Bank of America.

The allegations against General Electric included a $585 million overstatement of the company's 2002 net earnings relating to accounting practices for aircraft parts sales, avoidance of a $200 million pre-tax charge to earnings due to accounting practices for the company's commercial paper, acceleration of revenue recognition relating to $370 million of locomotive sales in 2002 and 2003, and improper accounting for interest-rate swaps.3

The second-largest amount of the quarter was the $29.8 million summary judgment award against James Duncan for his role in running an affinity fraud that took the form of a "Ponzi-like scheme."4,5 According to the SEC, Mr. Duncan, along with codefendants Hendrix Montecastro and Maurice McLeod, targeted members of the Southern California Filipino community, fellow church members, and military personnel.

The third-ranking settlement was the $18.3 million settlement with AGCO Corporation for an alleged violation of the Foreign Corrupt Practices Act (FCPA). AGCO, a manufacturer of agricultural equipment, is alleged to have paid $5.9 million in bribes to Iraqi officials over the period 2000 – 2003 in exchange for contracts under the UN Oil-for-Food program.

Exhibit 1. Ten Largest SEC Settlements In The Third Quarter Of 2009

Trends In The Number Of Settlements

The number of settling defendants declined to 626 for FY 2009, the second consecutive year of decline and the lowest annual number of settling defendants since the Sarbanes-Oxley Act ("SOX") (Exhibit 2). However, there are important caveats to this observation. First, this has been a year of transition and staff turnover at the SEC, including in the top positions. Notably, the agency has a new Chairman, Mary Schapiro, and a new director of enforcement, Robert Khuzami. Further, many of the cases settled in FY 2009 were likely the result of investigations opened in earlier years.6

Exhibit 2. The Number Of Settling Defendants Declined For The Second Straight Fiscal Year 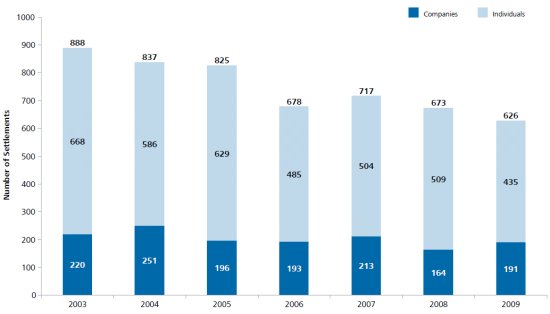 Exhibit 3. The Average Company Settlement Amount Increased In 2009, But The Median Held Steady 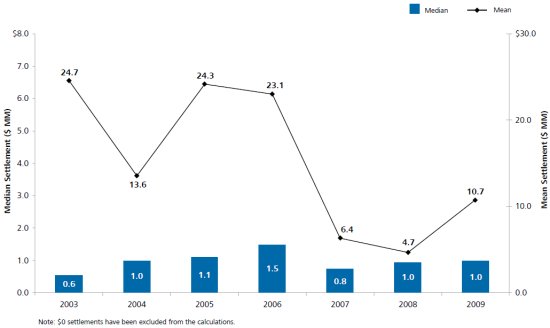 The Proposed Bank Of America Settlement

Had the $33 million proposed settlement with Bank of America not been struck down in federal court, it would have counted as the second-largest settlement in the quarter. In that case, the SEC has accused Bank of America of inadequate disclosures of provisions for bonus compensation to Merrill Lynch employees in proxy documents sent to shareholders of both firms before a vote on the Merrill acquisition.

Finding that the proposed settlement "[did] not comport with the most elementary notions of justice and morality, in that it proposes that the shareholders who were the victims of the Bank's alleged misconduct now pay the penalty for that misconduct," Judge Jed Rakoff ordered the case to proceed with a trial date of February 1, 2010.7

Judge Rakoff found particular fault with the settlement in that it fined the company (and hence its shareholders) rather than the culpable individuals.8 The failure of the SEC to obtain approval for this settlement may therefore be expected to result in the SEC pursuing claims against individuals with renewed vigor in cases involving publicly-traded companies. Indeed, the SEC itself has acknowledged that, "Where shareholders have been victimized by the violative conduct, or by the resulting negative effect on the entity following its discovery, the Commission is expected to seek penalties from the culpable individual offenders acting for a corporation."9 To examine how this has played out in practice, we have studied every post-SOX settlement relating to alleged public company misstatements.

Exhibit 4. In The Post-Sox Era, Most Public Company Misstatement Cases Have Led To Both Company And Individual Settlements 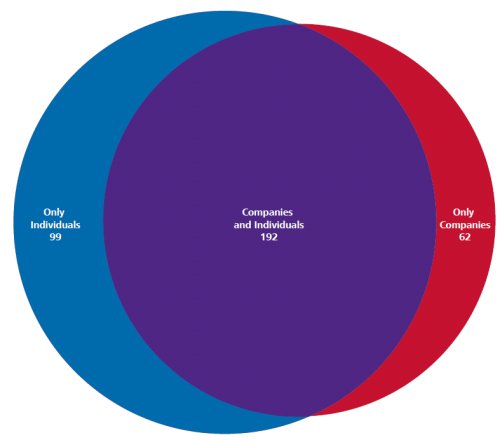 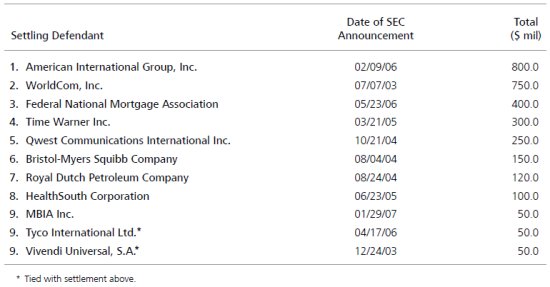 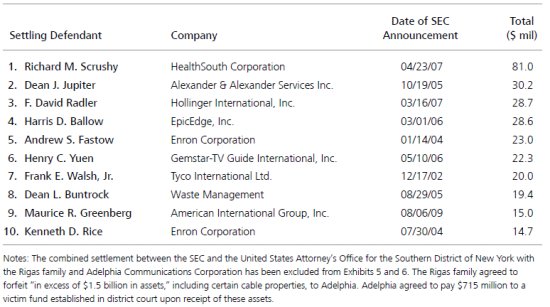 Exhibit 7. The Number Of Settling Defendants In Misstatement Cases Fell For The Second Straight Fiscal Year 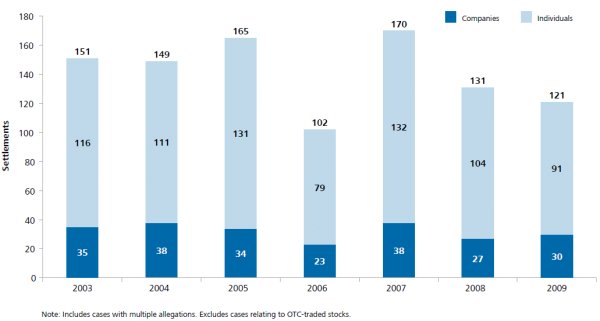 The median company settlement value in misstatement cases also declined, for the third straight year, to $8.0 million (Exhibit 8). The $8.0 million company median was the lowest in any fiscal year since 2003. The median settlement amount for individuals in misstatement cases has ranged from a low of $72,000 in FY 2003 to a high of $120,000 in FY 2007. 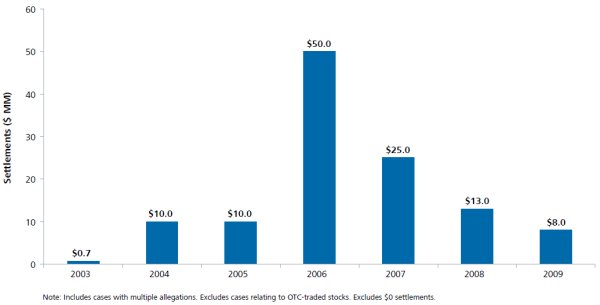 The 2009 decline in public company misstatement settlement amounts occurred despite Mary Schapiro bringing the SEC's penalty pilot program to an end in January. Under the penalty pilot program, instituted under former SEC Chairman Christopher Cox in January 2007, SEC staff members were required to obtain pre-approved settlement ranges from the Commission prior to beginning negotiations with publicly held companies. Ms. Schapiro, citing staff concerns that the program sometimes led to lower corporate penalties than were warranted, announced that she was bringing this program to an end in January 2009.13 However, it is not yet apparent that ending the penalty pilot program has led to an increase in public company misstatement settlement amounts.

The Number Of Insider Trading Settlements Hit A Post-SOX Low

Exhibit 9. The SEC Reached Fewer Insider Trading Settlements In FY09 Than In Any Fiscal Year Since SOX 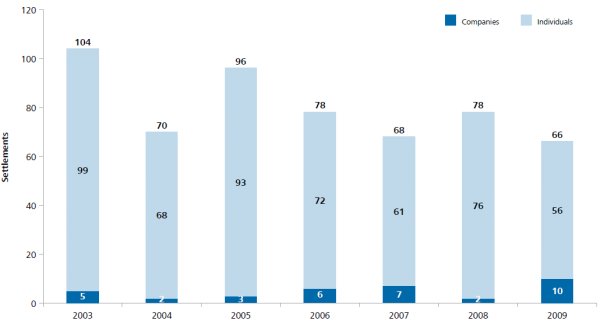 The median settlement amount for individuals in insider trading cases also fell in 2009, to $0.10 million from $0.14 million in FY 2008 (Exhibit 10). Penalties in these cases are limited to three times the gain realized or loss avoided as a result of the insider trading, so these trends are driven both by the size of the implicated trades as well as the punitive stance of the SEC and the courts.

Over the full period of FY 2003 to FY 2009, the median insider trading settlement for companies was $0.1 million, while the mean was $0.4 million. The trends in the annual settlement amounts may be less meaningful for companies, because of the small number of such settlements in each year.

Exhibit 10. After Four Years Of Steady Increase, The Median Settlement Amount With Individuals In Insider Trading Cases Fell In FY 2009 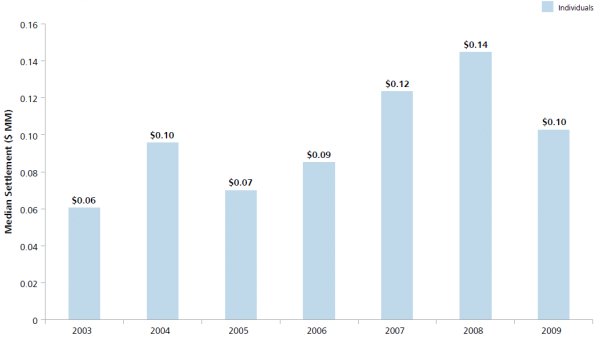 Fiscal year 2009 brought substantial changes to the SEC, in both leadership and its enforcement process. Mary Schapiro replaced Christopher Cox as Chairman of the agency, and Robert Khuzami took over as the Director of Enforcement. Under new leadership, the SEC has enacted several reforms to its enforcement process. The penalty pilot program, which required SEC staff to obtain pre-approved settlement ranges from the Commission before negotiating with public companies, was brought to an end.16 Ms. Schapiro has streamlined the process by which SEC staff obtain formal orders of investigation, in an effort to speed up the investigative process.17

A number of additional reforms have been proposed that could strengthen enforcement activity. As a result of fallout from the Madoff matter, the SEC is seeking authority to reward whistleblowers in cases involving any violations of the securities laws.18 The agency is also seeking penalty authority against aiders and abettors under the Investment Advisors Act.19 Finally, the Department of the Treasury's report "Financial Regulatory Reform—A New Foundation" recommended several reforms directly impacting the SEC's powers, including stronger SEC regulation of hedge funds and credit rating agencies, SEC authority to require that compensation committees of public companies are more independent, and harmonization of SEC and CFTC regulation of securities and futures.20 However, the Bank of America case will also test the SEC's powers. The SEC suffered a defeat when Judge Jed Rakoff rejected the $33 million settlement it had reached with Bank of America Corporation and called for a trial, which is set for February 2010.

Because of the time that it takes for an investigation to become an enforcement action and settlement, the full impact of the reforms already implemented is likely yet to be seen. We will continue monitoring trends in SEC settlements and enforcement-related policy changes in this series of quarterly reports. For additional information and previous reports, please visit www.SecuritiesLitigationTrends.com.

* Mr. Larsen is a Consultant at NERA; Dr. Buckberg is a Senior Vice President at NERA; and Dr. Lev is the Director of the Vincent C. Ross Institute of Accounting Research and the Philip Bardes Professor of Accounting and Finance at New York University Stern School of Business, and a Special Consultant to NERA. The authors thank Ashley Hartman and Eric Schmitt for excellent research assistance and Paul Hinton for valuable comments and suggestions.

1. There are certain types of settlements that do not meet the criteria for inclusion in our analysis. These include settlements relating to failure to file periodic financial statements with the SEC, administrative proceedings barring accountants because of felony convictions, and administrative proceedings barring brokers, dealers, and accountants for practicing while unregistered.

4. "Federal Court Grants Summary Judgment and Orders Principals of Offering Fraud to Pay Disgorgement and Civil Penalties of Over $30 million," SEC Litigation Release, July 9, 2009. Hendrix Montecastro is jointly and severally liable for $27.5 million of the $29.8 million award against James Duncan.

6. For example, 38% of enforcement actions opened in fiscal year 2008 were the result of investigations opened more than two years earlier. 2008 Performance and Accountability Report, US Securities and Exchange Commission, p. 31.

8. According to Judge Rakoff's order, the SEC claims that lawyers for Bank of America are responsible for the alleged misstatement. In his order, Judge Rakoff asked, "Why are the penalties not then sought from the lawyers?" Ibid.

9. "Statement of the Securities and Exchange Commission Concerning Financial Penalties," SEC press release, January 4, 2006. As discussed in the press release, the origin of this idea is in the Senate Committee on Banking, Housing and Urban Affairs report on the 1990 Securities Enforcement Remedies and Penny Stock Reform Act (the "Remedies Act"), which expanded the SEC's authority to seek monetary civil penalties. Prior to the Remedies Act, the SEC could only seek monetary civil penalties in insider trading cases.

10. This figure includes only companies that were traded on national exchanges at the time the alleged misstatement was operative.

12. The total number of individuals that have settled in public company misstatement cases since SOX is 699.