United States: Medicare Shared Savings Program May Get A Makeover

This article by partner Michael Lampert and associates Susan Sheffler and Whitney Wadman was published by Law360 on August 27, 2018.

The Centers for Medicare & Medicaid Services has issued a proposed rule that would overhaul the Medicare Shared Savings Program, or MSSP, for accountable care organizations, or ACOs.

The revised program, referred to as "Pathways to Success":

CMS launched the MSSP, created by the Affordable Care Act, in 2012. Currently, 561 ACOs, serving over 10.5 million Medicare fee-for-service, or FFS, beneficiaries, participate in the program. The MSSP is designed to hold ACOs accountable for the total cost of care and quality outcomes. ACOs that reduce Medicare expenditures below a set benchmark while meeting quality requirements are eligible to receive additional reimbursement in the form of a percentage of the cost savings achieved.

The MSSP currently has three participation tracks. Track 1, a one-sided shared savings track, allows ACOs to receive additional reimbursement of up to 50 percent of savings under the benchmark, with no requirement to share in the costs should spending exceed the benchmark. The vast majority of MSSP ACOs participate in track 1 (82 percent). ACOs participating in tracks 2 and 3, the two-sided shared savings/shared losses tracks, are eligible to receive a greater percentage of program savings, but also are required to bear downside risk, sharing losses with CMS if their spending is above the benchmark.

A recent analysis indicates that the current MSSP has failed to reduce federal government spending, and in fact has led to increased spending of over $380 million.1 But despite this overall loss, the two-sided models (tracks 2 and 3) did reduce federal spending by $60 million over five years — those savings were just overshadowed by program losses generated in the more popular track 1. By redesigning the program, CMS seeks to increase savings for the Medicare program by increasing the number of ACOs participating in two-sided risk tracks.

PROPOSED REDESIGN OF THE PROGRAM

Changes to the Risk Model

Perhaps the most significant proposed change in the proposed rule is revision of the MSSP's participation tracks and mandatory advancement to greater levels of two-sided risk. Under the proposed rule, tracks 1, 2 and 3 will be replaced with two "glide paths." The table in footnote 1 summarizes the key characteristics of proposed paths.

Under the proposed rule, the so-called BASIC glide path would replace tracks 1 and 2 and limit the amount of time ACOs may participate in a one-sided risk model. On the BASIC path, eligible ACOs would start under a one-sided model, with a maximum amount of potential shared savings (shared savings cap) of 25 percent, a reduction from track 1's shared savings cap of 50 percent, and would incrementally phase in to higher levels of assumed downside risk.

The BASIC glide path, like the so-called ENHANCED glide path described below, achieves this incremental phase-in through use of subcategories called experience levels. Under the experience levels, ACOs become eligible for increased shared savings caps and increased levels of shared downside risk.

ACOs new to the program would be permitted two years in a one-sided risk experience level (one year at level A and one year at level B), while ACOs that previously participated in track 1 would be ineligible to enter the program at level A, thereby limiting them to just one year of participation in a one-sided risk experience level (level B). Level A and B will be similar and will be the only two experience levels without any downside risk. Regardless of the experience level in which an ACO begins, ACOs advance through further experience levels, climbing one level each year (or more, if they wish), and assume additional risk with each level. ACOs would begin to bear two-sided risk and thereby to share in losses at level C, assuming risk for 30 percent of higher-than-benchmark costs, not to exceed 2 percent of ACO participant revenue, and capped at 1 percent of the updated benchmark. By experience level E, ACOs' shared savings cap would reach 50 percent, and shared losses would reach 30 percent of higher-than-benchmark costs, subject to a calculated cap. Participation at experience level E qualifies as participation in an advanced alternative payment model under the Quality Payment Program. Providers participating in an advanced alternative payment model are eligible to receive additional incentive payments from CMS and are exempt from participation in Merit-based Incentive Payment System (MIPS) reporting requirements and potential downward payment adjustments.

Under the proposed rule, the ENHANCED glide path would replace the current MSSP ACO track 3, which it largely mirrors. As with track 3, ACOs participating in the ENHANCED path would have a shared savings cap of 75 percent and would shoulder responsibility for between 40 percent and 75 percent of higher-than-benchmark costs. The proposed rule indicates that CMS also would offer ACOs participating in the ENHANCED path at the highest experience level additional tools and regulatory flexibility, including, among others, broadened use of telehealth and waiver of the three-day skilled nursing facility admission rule, as described below.

Eligibility to participate in each path varies, and depends on an ACO's prior participation and level of experience, and whether the ACO is classified as a high-revenue or low-revenue ACO.

Under the proposed rule, ACOs less experienced with performance-based Medicare initiatives are eligible to enter an agreement period under the BASIC path.

Experienced ACOs, including those identified as previously participating in track 2 or track 3, would be eligible to participate in only the ENHANCED path, or the BASIC path's Level E if the ACO qualifies as a low-revenue ACO.

Low-revenue ACOs, defined as ACOs that receive less than 25 percent of their total Medicare FFS expenditures from the ACO's assigned beneficiaries, may participate in the BASIC path for up to two agreement periods. These low-revenue ACOs are typically smaller physician practices, rural providers or other providers working in underserved markets. High-revenue ACOs, those with total Medicare FFS revenue for assigned beneficiaries greater than 25 percent, would be required to transition to the ENHANCED path more quickly and would be permitted, at most, a single agreement period on the BASIC path.

When considering the experience level in which to participate (or whether to participate at all), and assuming no changes in the final rule, both current and prospective ACOs will want to consider carefully their financial and operational readiness for the various percentages of downside and upside risk for each experience level, summarized in the chart in footnote 1 — in addition to more general factors, including the strategy that they intend to employ to avoid downward adjustments under the Medicare Access and CHIP Reauthorization Act (e.g., through participation in an advanced APM such as a BASIC path level E or ENHANCED path ACO), and the relative benefits of participation in the revised MSSP versus a more targeted focus, such as the Bundled Payments for Care Improvement Advanced (BPCI-A) Initiative.

The proposed rule also includes modifications to the repayment mechanism requirements, to reduce the burden on ACOs in performance-based risk tracks. Under the current MSSP, ACOs accepting performance-based risk must establish a repayment mechanism to assure CMS that they can repay losses for which they may be liable. Under Pathways to Success, certain ACOs participating in the BASIC path in levels C, D or E would have a lower required repayment mechanism amount, to reflect the BASIC path's potentially lower levels of loss liability. Additionally, the proposed rule would permit ACOs renewing their participation in the MSSP to maintain a single, existing repayment arrangement, to streamline the repayment of shared losses during the transition period to the new glide paths.

Updates to the Benchmarking Methodology

The proposed rule would also refine certain parts of the MSSP benchmarking methodology, a complex calculation incorporating each ACO's risk-adjusted historical expenses along with national or regional spending trends.

First, the proposed rule would accelerate inclusion of regional factors into the benchmarking methodology within the first agreement period, allowing for an earlier and more accurate comparison of an ACO's expenses to others in its service area. Second, the extension of the agreement period from three years to five years would reduce the frequency of benchmark rebasing and provide greater predictability for both ACOs and CMS. Lastly, so as not to punish or reward an ACO excessively based on its geographic location, CMS proposes reducing the maximum weight given to the regional adjustment from 70 percent to 50 percent and capping the total regional adjustment at 5 percent of national Medicare FFS per capita expenditures.

The proposed rule encourages ACOs to innovate in coordination of care by offering regulatory flexibility. The proposed rule contains several changes aimed at achieving this goal. First, under the proposed rule, physicians in ACOs participating in the ENHANCED path, or levels C, D or E of the BASIC path, would be permitted to receive payment for provided telehealth services, even if otherwise applicable Medicare geographic requirements for telehealth are not met.

Second, enrolled ACOs participating in the ENHANCED path, or levels C, D or E of the BASIC path, would be permitted to waive the rule requiring a three-day stay in an inpatient hospital, acute-care hospital, or critical access hospital prior to admission to a skilled nursing facility.

Finally, implementing a provision of the Bipartisan Budget Act of 2018, the proposed rule would provide ACOs with greater choice of beneficiary assignment methodology. Enrolled ACOs, regardless of track, would be permitted to select prospective assignment or preliminary prospective assignment with retrospective reconciliation prior to the start of each agreement period, and would be able to change their selection for each subsequent performance year.

The proposed rule contains several provisions aimed at improving quality and lowering costs by promoting beneficiary engagement. Certain ACOs participating in the two-sided risk models (the ENHANCED path or the BASIC paths levels C, D or E) would be allowed to establish a CMS-approved beneficiary incentive program and to provide incentive payments of up to $20 per qualifying service to beneficiaries for receiving primary care services. The proposed rule does not detail the specific eligibility criteria for an ACO to qualify for a regulatory waiver related to beneficiary incentive programs. Under the proposed rule, ACOs would be required to provide additional beneficiary notifications, including information regarding how to change a primary care provider. Additionally, beneficiaries would be permitted more flexibility in designating a "primary clinician" under the proposed rule, expanding the types of nonphysician providers eligible to be designated as a beneficiary's primary clinician.

The Pathways to Success program would eliminate the meaningful use electronic health record quality measure, allowing ACOs instead to attest that a specified percentage of their eligible clinicians use certified EHR technology, or CEHRT in order to participate in the program. The proposed rule also proposes use of an interoperability criterion regarding CEHRT use to determine both ACOs' eligibility for initial participation in the program, as well as ACOs' annual certification of compliance with program requirements. ACOs would need to attest and certify upon application to participate in the shared savings program, and subsequently, as part of the annual certification process, that at least 50 percent of the eligible clinicians participating in the ACO use CEHRT to document and communicate clinical care to their patients or other health care providers.

Under the proposed rule, CMS would offer a one-time new agreement period start date of July 1, 2019, in lieu of an agreement period start date of Jan. 1, 2019. ACOs with a participation agreement expiring Dec. 31, 2018, would have a one-time opportunity to extend their current agreements through June 30, 2019. It is CMS' hope that these changes provide ACOs time to evaluate the impact of the proposed rule, if finalized, and to determine their future participation in the MSSP, if any. Finally, the proposed rule would change all agreement terms following the renewal period from three years to five years. The 60-day public comment period will run through Oct. 16, 2018. 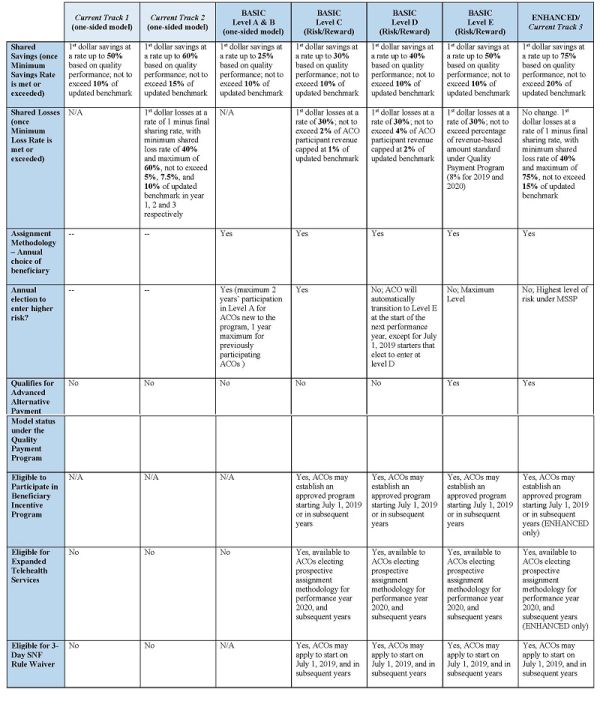