Turkey followed in Germany's footsteps. As we know, Germany introduced a new regulation in second quarter of 2020, to prevent from hate speech and other illegal content by compelling social media companies to be more accountable. Although the regulation was highly criticized by the public, Turkey also joined the list of countries who prefer to regulate the social media companies to have a stronger grip over the internet.

In this respect, significant amendments to the Law No. 5651 Internet Law ("Internet Law") were enacted by Turkish Parliament on 29 July 2020. Similar to Germany, Turkey mainly aimed to stipulate the foreign social media companies with high internet traffic to appoint a local representative in Turkey. Hence, potential concerns raised by the authorities can be addressed within Turkey.

However, that is not all. Let's dig into the details of the new amendments...

What is the scope?

Most importantly, the law maker introduced a new definition to Article 1: "the social network provider". It defines these providers as

"real or legal entities that enable users to create, share or view content, information or data such as text, images, sound, location on the Internet medium, for the purpose of social interaction."

Hence, we may easily conclude that the amendments add a new concept to the Internet Law alongside of content provider, hosting provider, access provider and service provider.

On the other hand, we may assert that the law maker preferred to use a broad definition for the social network provider. Therefore, it is not quite clear that which type of social network providers are included within the scope of the definition. For instance, the law maker does not specifically refer the individual communications and one may argue that it is not obvious whether the individual communications are included in the scope.

At this point, the only interpretation can be made through the preamble of the provision which says it includes mainly the social interaction channels which are popular and widely used for communication purposes among the users. Also, we should stress that many of the new rules mainly concern the social network providers with the daily traffic over one million access.

Finally, the social network providers will have 3 months pursuant to new amendments to comply with the Internet Law.

What are the obligations of the social network providers? 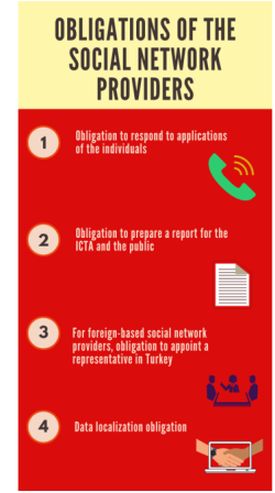 With the new rules, social network providers with daily traffic over one million access are obliged to respond to applications from the relevant individuals on content removal and access blocking within 48 hours. Although it is possible to respond with a positive or negative answer, there is an obligation to provide a reasoning for negative answers.

In addition, social network providers with the daily traffic over one million access is obliged to appoint a representative. An authorized person must be appointed as the representative in Turkey, in order to manage communications with administrative authorities, respond to the applications of individuals, and to fulfil legal obligations. The identity and the contact information of the relevant representative should be reported to ICTA. Although the representative to be appointed in Turkey can be a real person or a legal entity, Turkish citizenship is a must for the appointment of a real person.

The amendments to the Internet Law set forth various sanctions to be applied in the event of a non-compliance with the obligations mentioned above. For example, failure to answer the applications of the individuals duly in 48 hours results with a fine in the amount of TRY 5 million (607.457 EUR1) while non-compliance with the obligation to prepare a report may bring on an administrative fine of TRY 10 million (1.214.914 EUR).

However, perhaps the most important sanctions are brought up in case of a violation of the obligation to appoint a representative in Turkey.

What are the main differences with the regulation in Germany?

From a general perspective, it can be easily asserted that although Turkey mainly followed the regulation in Germany, there are several significant differences between these regulations.

First of all, the Regulation in Germany clearly excludes individual communications and the platforms which provide newspaper or editorial services. On the other hand, as it is previously mentioned, the law maker in Turkey drafted a quite broad definition for the social network providers and does not narrow the limits of this new concept.

In addition, the regulation in Germany mainly grounds on user count of the social network providers. However, the regulation in Turkey prefers to refer to the conditions of "having more than one million daily access from Turkey".

Finally, it is worth to mention that the regulation in Germany set forth more details regarding the complaint and reporting procedures compared to the new amendments in Turkey. In this respect, we may expect that rather than the Internet Law itself, the details will be determined with the secondary legislations in upcoming future.

Undoubtedly, the new Internet Law will lead to many discussions regarding the implementation of the amended provisions.

At this point, it is certain that the law maker in Turkey added new players within the field of the Internet Law. Therefore, many local and foreign companies who are active on the internet may require a comprehensive legal analysis in the face of the new amendments.

On the other hand, it is an undeniable fact that for the sake of the legal certainty, the sector will require secondary legislations where the broad concepts are clarified and the relevant procedures are determined in detail.