by Alican Solmaz
Deliveli Turkmen Attorney Partnership
0 Liked this Article
To print this article, all you need is to be registered or login on Mondaq.com.

Turkey is at the crossroads of Europe and strategically and economically important regions. Given its strategic location, it constitutes an energy link between the consumer markets and source countries. The Turkish government predicts that energy demand will increase by at least 10% every year for the next twenty (20) years. The gap between Turkey's energy supply and demand is the key element which determines Turkey's energy policy and given such demand, energy has an important role influencing both internal and foreign policy. In general, as a country with rapidly growing economy and given its energy demand, Turkish electricity market is one of the fastest-growing in the world.

Unlicensed electricity generation is an exclusive system based on the use of renewable energy resources which gives the electricity subscribers the opportunity to produce their own electricity and to sell the surplus in accordance with the conditions stipulated within the framework of the regulation.

The legal framework and its implementation including the application procedure, as well as a brief analysis thereof, are summarized below with respect to unlicensed electricity generation based on solar and wind power activities according to Turkish law.

Electricity Market Law is the primary legislation for the electricity market activities in Turkey and thus, the primary legal ground for the unlicensed electricity generation. Unlicensed electricity generation activities are regulated pursuant to Article 14 of the Electricity Market Law. According to this article, generation facilities based on wind and solar power resources, (i) which have the installed capacity of maximum one (1) MW, and (ii) which utilize all of their generated energy without supplying it to the grid and which utilize their generation and consumption at the same location, can conduct their activities without a license.

Moreover, every person or legal entity is entitled to establish an unlicensed electricity generation facility provided that such person is an electricity subscriber. In relation to installation of capacity of maximum one (1) MW facilities mentioned in item (i) above, principally, only one (1) generation facility up to one (1) MW based on renewable energy sources can be established per each consumption point represented by an electricity subscriber. However, in the case the distribution system has sufficient capacity to cope with the uptake, more than one (1) generation facility based on renewable energy sources can be established for each consumption point providing that total capacity of all facilities shall not exceed one (1) MW.

Another important issue that should be taken into consideration about the Unlicensed Electricity Generation Regulation is that the power generation and consumption locations are required to be in the same distribution zone.

The purpose of the unlicensed electricity generation is to generate energy to meet only their own needs. However, if surplus energy is generated from wind and solar energy sources, it can be sold back to the grid/distribution company for ten (10) years, at the price of the Renewable Energy Sources Support Mechanism6, as set out in the Renewable Energy Law7. In addition, domestic equipment and material usage for solar and wind energy facilities is also incentivized by renewable energy support mechanism. In accordance with Article 6/B of Renewable Energy Law, the relevant authority makes an incentive pay in favor of the investor for the first five (5) years by calculating the amount with respect to feed-in-tariffs set under the Renewable Energy Law taking into consideration sold energy to the national grid system.

Applications shall be evaluated and concluded within the twenty (20) days of the following month when application has been made. Unlicensed electricity generation model is summarized hereunder as well: 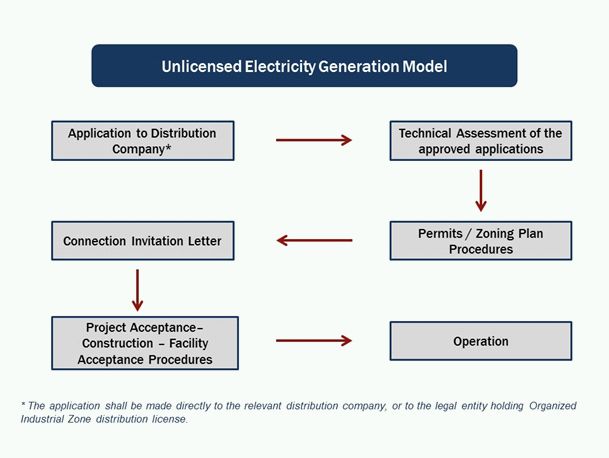 A brief analysis of the relevant legislation highlights some of the issues faced and criticized by the investors investing unlicensed electricity generation in Turkey.

One of the major issues lays behind the reason that there is a high demand from investors for unlicensed electricity generation in Turkey and its resulting connection problems due to the lack of connection possibilities.

Another major issue is that there is uncertainty following the expiration of the feed-in-tariffs after the tenth (10) year.

Last, but not least, some investors also raise concern that there is no protective regulation in the applicable legislation in favor of the investors upon occurrence of a change in law decreasing the rates of incentive mechanism.

5. Communiqué on the Application of the Regulation on Unlicensed Electricity Generation, published in the Official Gazette dated October 02, 2013 and numbered 28783.

7. Utilization of Renewable Energy Sources for the Generation of Electrical Energy Law numbered 5346, published in the Official Gazette dated May 18, 2005 and numbered 25819.