After five years of implementation of the most recent support mechanism, Turkey dramatically changed the procedures of supporting renewable energy in power generation. Based on Law No: 53461 (YEKDEM Law) and the YEKDEM Regulation,2 the mechanism guaranteed the qualified plants the pre-set cash flow determined by the legislation regardless of their planning, balancing or the existing spot market prices. The plants were automatically granted the cash calculated by their metered generation multiplied by corresponding per unit support price.

Considering the costs of the increased level of supported generation on the overall system and the importance of balancing requirement, the new scheme still promises, albeit indirectly, the guaranteed prices for qualified plants but introduces the balancing requirement for which the plants will eventually incur costs depending on their hourly generation planning capabilities, i.e. skills.

In this study, we seek to clarify the impact of the new scheme on the existing qualified plants after a comparison between the older and the newly introduced schemes. Balancing responsibility will inevitably be touched upon since the plants are now responsible for balancing.

The existing YEKDEM Law has undergone fundamental amendments in 2010 and the current legal background for renewable support mechanism was laid down through these amendments.

Based on this legislation, the incentives for the use of renewables in power generation include Feed-in tariffs, purchase guarantees, connection priorities, lowered license fees, license exemptions in exceptional circumstances and various practical conveniences in project preparation and land acquisition. The legislation includes a differentiated feed-in tariff scheme for different types that eventually provide the investors with predictable returns on their investment. The guaranteed prices are applicable for ten years after commissioning. 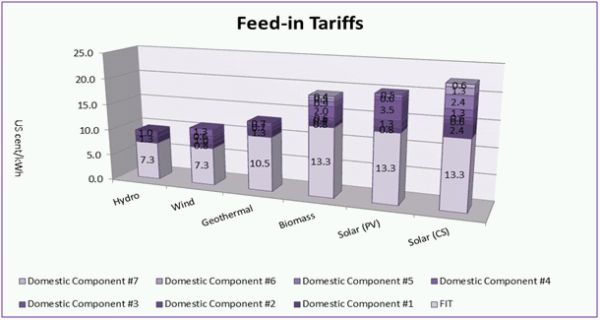 The uniqueness of this scheme is that the qualified plants are eligible for extra feed-in tariffs if certain equipment used in the plants is manufactured in Turkey. There is a separate regulation that lays down the principles and procures of documenting the fact that the equipment is domestically manufactured3. The duration for domestic component addition is five years after commissioning.

Generation companies willing to benefit from the support mechanism should apply to the Energy Market Regulatory Authority (EMRA) by October 31, in case they would like to register to the system for the following calendar year. After the review and the evaluation of the applications, the appropriate applicants are notified within the first ten days of November; the final list for the upcoming calendar year is announced by EMRA no later than November 30.

Certain rules governed the implementation of the support scheme. First of all, it was operated on a yearly basis, and the plants who participated within the so called YEKDEM portfolio were not allowed to exit the system or to sell on other platforms other than the portfolio. In return, the entire generation counted by their meters was purchased by the system operator at YEKDEM prices leaving the plants without price, volume and currency risks. These plants were also exempt from balancing responsibility so were not obliged to forecast their future generation as well.

The incentive scheme introduced in 2010 has attracted little interest during the first years. However, eligible plants increasingly started to approach the mechanism due to two facts: First, the reference electricity prices emerged from the day-ahead market (PTF) stagnated. Second, US currency started to appreciate against the Turkish Lira. Thus, the spread between the feed-in tariffs and the spot day-ahead prices widened in the course of 2014 and 2015. The below graph depicts the PTF and the feed-in tariff levels for geothermal, wind/hydro and solar comparatively. 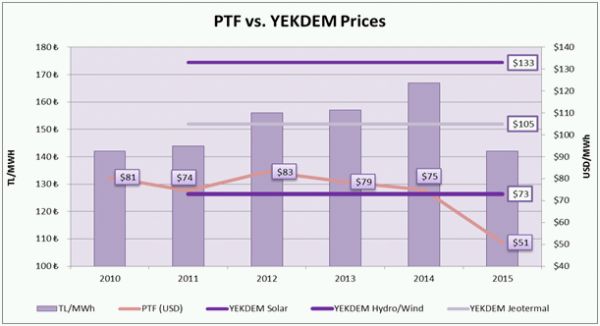 As depicted in the graph, in 2015 the average PTF revolved around US$51, whereas the feed-in tariffs has a constant value of US$73 for hydro and wind and US$133 for solar. The spread represents the extra revenue generated from participating within the YEKDEM portfolio. For 2016, YEKDEM final portfolio has been announced by EMRA in 08.12.2015, and the total volume has reached 15.000 MW. 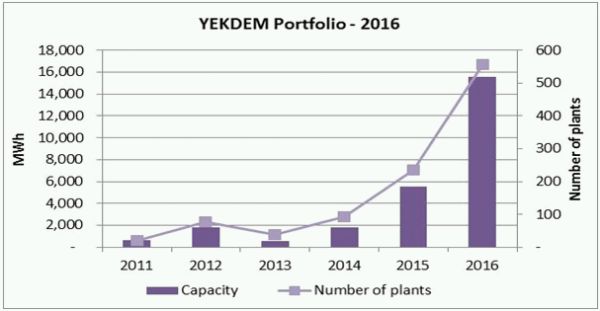 Concerns on the burden that such a volume would ultimately usher in turn out to be among the hottest topics in the Turkish power market in the course of the last two years. Considering that the peak load is expected to be around 45.000 MW in 2016 and 15.000 MW renewable portfolio without balancing responsibility and with substantially higher guaranteed prices,4 the concerns appeared at the policy-making side should have been no surprise.

The amendments regarding YEKDEM were published into regulation on 29 April 2016, and they became applicable for the 2016 portfolio as well. The fundamental changes are as follows:

EMRA did not have a free hand in amending the YEKDEM Regulation since some of the incentives were secured by the legislation and extended by the Council of Ministers for the plants which will be commissioned until 31 December 2020.

Considering that the exemption from the balancing responsibility is not granted by legislation, EMRA set each plant responsible for their imbalances as with other power plants operating in the power market. Since the spread between the FIT prices and PTF will be paid to the plants separately, the main game changer for power plant economics is the cost of imbalances. Rules and procedures for calculating these costs are laid down in the Electricity Market Balancing and Settlement Regulation (DUY). We need to touch upon these rules in order to have a thorough understanding regarding the impact that the amendments will have on the power plants once exempt from these rules5. 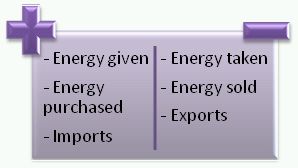 DUY stipulates that all market participants are required to balance their energy given to the system, energy purchases and imports on the one hand and their energy taken from the system, energy sales and exports on the other hand on an hourly basis. Market participants are called as "balancing party" and take up responsibility before the market operator for the settlement of their imbalances6.

Energy imbalances are calculated based on the methodology adopted in the 110th Article of DUY. The methodology is depicted below:

In order to avoid a possible arbitration between the day-ahead market and the balancing market, EMRA adopted a "min-max approach" when settling the imbalances. Given the fact that plants may be in a short (lack of generation) or long (excess generation) position in real time they will be buying or selling on the balancing market where buying price would be max (PTF, SMF) and selling price would be min (PTF, SMF). That is, imbalances are being settled on a "buy expensive, sell cheap" approach. Thus, opportunity to profit from arbitrage between the day-ahead market and the balancing market is eliminated. In addition, k and l coefficients represent monetary penalties applied for the imbalances. According to Article 110 of DUY, the authority to determine these coefficients belongs to EMRA Board subject to three months' prior announcement. For the time being, k and l coefficients have been set as 0.03 which means the cost of imbalance escalates three percent of PTF or SMF depending upon the position of the power plant and the values of PTF and SMF.

Consequently, power plants eligible for YEKDEM have to plan their generation beforehand and incur costs associated with their imbalances. The below example represents how the new scheme differs from the previous scheme.

Assume that for a given hour Plant A has the variables below as given: 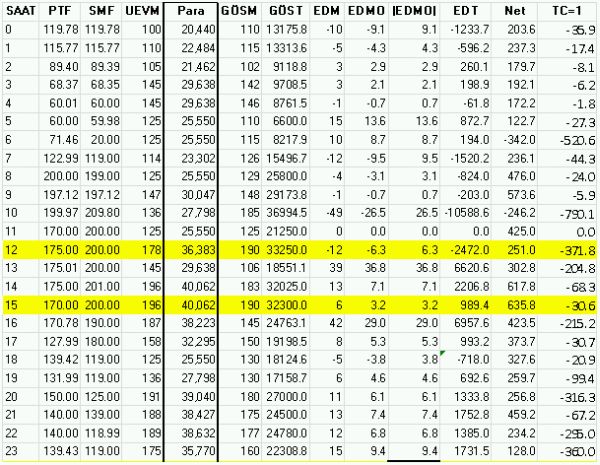 As seen from the chart, the cash flow of the plants, under the new scheme, are being affected by the relative values of PTF and SMF, by the amount of imbalance, by k, l and the tolerance coefficients determined by EMRA. TC=1 column in the previous chart shows, ceteris paribus, the net position for the power plant if EMRA sets the coefficient at 1.

Another exercise might be run for a short position. Assume that PTF is 175 TL and SMF is 200 TL. The quantity sold at the day-ahead market is 190 MW and the realized generation 178 MW which means 12 MW short position (6.3% imbalance).

As seen from the chart, the net position is highly sensitive to the tolerance coefficient set by EMRA. As an initial value, it is set as 0.98; however any upward change in this coefficient will likely to have substantial negative impact on the plant economy.

There are at least four additional points that are noteworthy regarding the new scheme:

The core of the new system introduced by EMRA is the balancing responsibility. This will incur new costs for the power plants thus power plants with intermittent generation have to manage their production on an hourly basis or seek ways to participate in a balancing group. The flip side of the coin is the extra spread generated by the tolerance coefficient. One can easily observe the sensitivity of the net position of the plants to the tolerance coefficient by playing out with the TC column on the sample excel sheet. Thus, EMRA's decision on the coefficient for the future calendar years will be highly determinative on the cash flows of the plants. TC=1 would mean, for instance, the absence of the extra spread and excel sheet speaks for itself regarding the net position of the plants in such a scenario.

This revolutionary change in the YEKDEM mechanism is likely to usher in hot debates as the consequences for the power plants economics materialize during the course of this year. Based on the realized figures, EMRA probably will re-evaluate the tolerance coefficient for 2017. Meanwhile, more fundamental changes have been proposed as legislation more recently, and the system for incentivizing renewable based power generation is likely to be entirely different from that of today, most probably starting from 2020.

1. Law on Utilization of Renewable Energy Resources for the Purpose of Generating Electrical Energy

2. Regulation on the Documentation and Supporting of the Renewable Energy Resources

3. Regulation on the Domestic Manufacture of Equipment Used in Renewable Power Plants

4. Please note these costs are passed through final consumers through retail license-holders.

5. It should be noted that these projects have been financed by the banks assuming that no costs for imbalances would appear on the cash flow.