1.1 Turkey liberalized the electricity market in 2001 and established the sector-specific regulatory body Energy Market Regulatory Authority (EMRA) concurrently. The segments in the electricity value chain have been unbundled and competition has been introduced into the power generation segment. Companies granted licenses from EMRA can operate the generation facilities and sell their generation in the bilateral market through private contracts or in the spot markets, i.e. day-ahead market and/or intraday market operated by Energy Exchange Istanbul (EPIAS) of which the shareholder structure includes market participants as well.

1.3 Varies types of fuels are being utilized to produce such levels of electricity. Led by natural gas; coal, hydro, wind and other renewables take place in the power generation portfolio of Turkey. Together with the net imports of 4.2 TWH, 264 TWH of electricity has been presented for consumption in 2015.

2.1 A feed-in tariff regime is being applied in order to incentivize the renewables-based power generation in Turkey. Denominated in US cents, for each type there is a different level of feed-in tariff level. In case domestically manufactured equipment is used in the plant, extra feed-in tariffs become applicable and the base feed in tariffs may go up substantially. 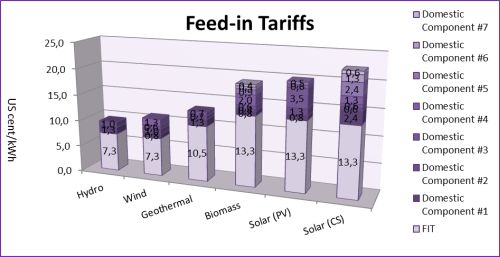 3.1 In Turkey, in order to build and operate any type of power plant, one needs to obtain a generation license from EMRA. EMRA initially grants a preliminary license to the applicants to allow them to obtain the necessary approvals and permissions from various government agencies and get themselves ready for the construction. This period is at most 36 months and cannot be extended other than under force majeure conditions.

3.2 Applicants able to obtain the necessary approvals and permissions are granted a generation license and can start the construction based on a construction timeline plan. Companies can apply for a preliminary license at any time they feel ready to apply, i.e. a rolling submission regime does apply in license applications. For wind and solar, however, each year a five-day window is announced, and the applications are received only during those days.

3.3 With respect to license applications regarding wind and solar, the licensing regime that has been applied differs from other licensing practices of EMRA. This licensing regime can be called a "window regime." Thus, license applications cannot be submitted to EMRA during the entire year but only in the period that EMRA announced. Pursuant to Article 12 of the License Regulation, each year, until 1 April, TEIAS notifies EMRA about the capacity of wind or solar power generation plants that can connect to the system regionally and/or with regard to the connection points for the upcoming five and ten years period. However, each year EMRA receives the applications in the scope of the released capacities of the last year; the application period is the first five days of October for the wind applications and the last five days of October for the solar applications.

3.4 In particular, certain on-site and off-site measurements regarding wind and radiation should be conducted as a pre-requisite for preliminary license application. According to the License Regulation, for wind power plants at least one year on-site wind measurement obtained during the previous three years is required. For solar, on the other hand, at least one year of which at least six-months is on-site radiation measurement obtained during the previous three years is required. The applications for the preliminary license are then sent to Renewable Energy General Directorate (YEGM) for technical evaluation. The applications approved by YEGM from a technical point of view are then sent back to TEIAS and/or relevant DSO for connection approval.

3.5 Another point regarding solar and wind license applications is the bidding process carried out by TEIAS in case of multiple applications for the same capacity. According to this bidding, if there are multiple applications to connect to the same connection point and/or to the same connection region, TEIAS is to carry out an auction to select the applicant who will be qualified for connecting to the system by taking into consideration of the announced capacity. Companies bid for the contribution margin per MW, and the proposed amount is to be paid a maximum of three years after the commissioning. At the end of the auction, the applicant who gains the connection right is granted preliminary license by EMRA. 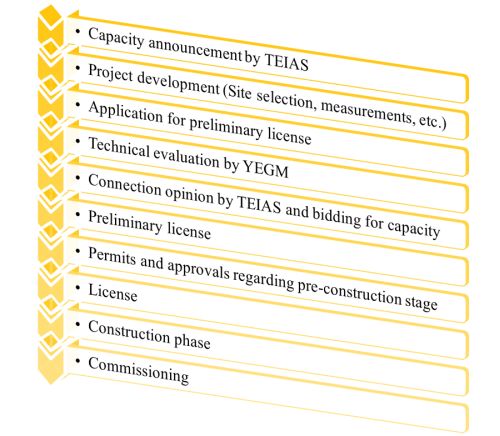 3.6 During the preliminary license period, necessary permissions and approvals to start the construction of the power plants should be obtained. During this period, applicants are required to;

3.8 So far, only one round of license applications for solar has been received by EMRA in 10-14 June 2013. Compared to the announced 600 MW capacity, the volume of 496 applications amounted to almost 8.000 MW. The auctions for the allocation of capacities have already been conducted by TEIAS and for most of them the connection reviews are underway. Among them, four applicants have already been granted the preliminary licenses while two companies have been granted licenses. 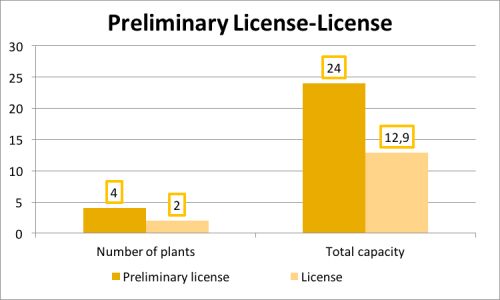 4.1 The amendments in the legislative and regulatory landscape regarding the electricity market in 2013 have paved the way for a rally towards non-license power generation based on renewable resources. The increase in the capacity allowed for non-license generation to 1 MW together with the increase in the attractiveness of the feed-in tariff prices (due partly to exchange rates and partly to the low levels of wholesale prices) are deemed responsible for such a rally. Both domestic and international investors are now highly interested in and have actually been involved in non-license power generation.

4.3 An even distribution is not being observed among distribution regions. Ignoring organized industrial zones (OSBs), 61% of the installed capacity is located in four distribution regions only that are AYDEM EDAS, BASKENT EDAS, KCETAS and MERAM EDAS. Three out of 21 regions do not have solar based non-license power generation. OSBs, on the other hand, have proved to be very active in commissioning solar non-licensed power plants. Given the TEDAS data, more than 11% of the commissioned capacity falls within the OSB boundaries led again by Kayseri OSB. Kayseri OSB and Kayseri Incesu OSB alone account for 85% of the capacity built in the OSB regions.

4.4 Based on both the number of projects and installed capacity, Kayseri province takes the lead with a total number of 56 projects and a total capacity of around 52 MW. In a recent study Solarbaba comparatively assessed the commissioned plants and the solar map of the country.1 The results revealed that, as expected, the commissioned projects are concentrated in the regions where depicted as efficient by the solar map. 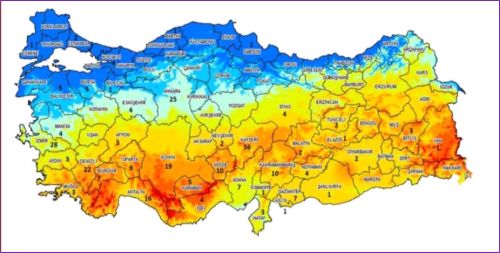 4.5 In order to assess the underlying logic of this rally on unlicensed solar power, one needs to look at three distinct issues:

4.6 The feed-in tariff levels as applied according to the Law on Utilization of Renewable Energy Sources for the Purpose of Generating Electrical Energy (the Renewable Energy Law) are denominated in US cents, thus cash-flows for the projects are directly dependent on the Turkish Lira (TRY) value of 1 US dollar (USD) for the given settlement period. TRY, on the other hand, has depreciated on a large scale against USD in recent several years. The journey of TRY depreciation is depicted in below chart based on Central Bank of Turkey (TCMB) data: 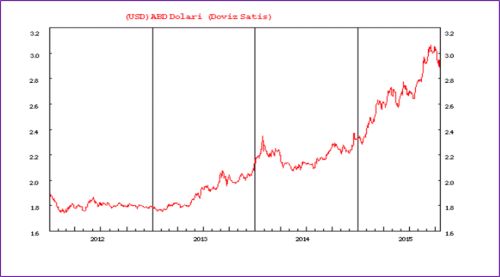 4.7 As shown in the graph, USD appreciation/TRY depreciation has gained momentum in the second half of 2014 and continued in the course of 2015. Considering that the feed-in tariff is 133 US cents/MWh for solar power, it can be observed that in TRY terms the companies were able to receive 240 TRY/MWh in the beginning of 2013 compared to 386 TRY/MWh. As the TL value of the feed-in tariff increases due to depreciation of the domestic currency, the interest in building un-licensed solar power plants has become increasingly popular. 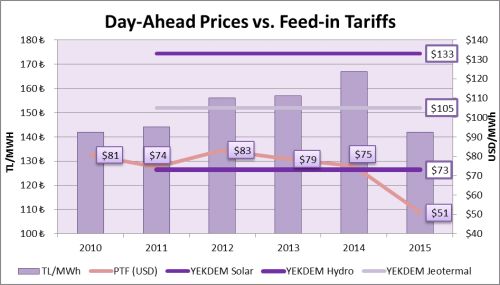 4.9 Licensing regime and the associated transaction costs are another important reason underlying the popularity of non-license power generating based on solar. Different from other types of generation licenses, licensing process for wind and solar are quite different.

4.10 First of all, applications for wind and solar licenses are received once a year and within only several days (window regime). Second, a minimum one year of measurement is required for the fields that are selected for siting. Third, since the capacity announced by Türkiye Elektrik Üretim A.Ş. (TEIAS) is limited, applicants bid to obtain the announced capacities at specific transformators. These transactions not only prolong the process but also create additional costs for the applicants. For non-license generation, on the other hand, companies do not have to follow these steps and directly commission the plant through signing the connection agreements with the distribution system operator (DSO). The fundamental difference between licensed and non-license generation is the fact the capacity for the latter is limited to 1 MW.

Non-requirement of self-consumption and siting

4.11 First of all, from a theoretical perspective, it should be stated that the overarching principle governing un-licensed power generation is self-consumption. This principle is also stated in the Regulation on Un-Licensed Power Generation (Regulation). However, EMRA allows un-licensed generation without any considerable consumption (one lamp is sufficient for one MW plant). Thus, any company willing to build a solar power plant without license is not required to have any facility to have consumption.

4.12 Second, restriction on the capacity has become abated due to the siting practices. That is, by locating more than one 1 MW plants side by side is accepted by TEDAS and EMRA. As a consequence, in practice, more than 1 MW capacity is being built and operated by a single company at the same location.

4.15 This popularity seems to continue in the foreseeable future. Although it is desirable to have more renewable based power generation in the national portfolio, concerns are also being expressed by some circles as the spread between wholesale prices and the feed-in tariffs expands. These concerns should also be addressed appropriately for the sustainability of the support mechanism.

5.1 Admittedly, the process for introducing solar in the power mix has followed a slower path compared to wind penetration in Turkey. The capacity constrained dictated by the limits of the transmission company TEIAS and the bureaucratic obstacles have hampered the solar penetration in Turkey. As a consequence, in Turkey there is no solar plant currently operational. People then have rallied towards un-licensed plant installations.

5.2 EMRA most recently announced a draft regulation to put some restrictions on the un-licensed installations but is not yet to be realized.