Turkey: Platform businesses are under the Turkish Competition Authority's radar

Mobile applications, online platform services and internet-based economics have been on the agenda of competition authorities in the last decade. In this respect, the Turkish Competition Authority (TCA) contributed to the antitrust assessment of platform businesses through one of its recent individual exemption decisions.

On July 27, 2017, the TCA announced its reasoned decision[1] regarding the agreement between Migros, one of the prominent players in Turkey's fast moving consumer goods (FMCG) market, and Hopi, which is a subsidiary of the Boyner Group,[2] which is offering personalized shopping experience and campaigns to its members via its mobile application. In the reasoned decision, the TCA scrutinized closely the exclusivity, most favored customer (MFC) and data sharing clauses in the agreement between Migros and Hopi. Although the TCA rejected the negative clearance of the agreement, the individual exemption request of Migros was accepted after the detailed analysis of relevant product market and an assessment of individual exemption requirements listed under Article 5 of the Act on the Protection of Competition (the Turkish Competition Act).

The first reason that the TCA gave a meticulous analysis of the relevant product market in its reasoned decision is to determine whether to evaluate the agreement between Migros and Hopi under the Vertical Block Exemption Regulation numbered 2002/2 or individual exemption regulation, depending on the market share of Hopi. Secondly and probably more significantly, the TCA focused on the relevant market definition in order to analyze better the possible anti-competitive or pro-competitive effects of the agreement during its exemption assessment. Since it has been a very contentious issue to define the relevant product market in case of two-sided platforms[3] especially for online markets or platform businesses, the TCA examined different cases of EU Commission[4] and also referred to some related academic articles.[5]

We have noticed that (i) Hopi's way of doing business, namely, personalized marketing activities based on a customer experience map developed by Hopi, and (ii) providing this personalized shopping experience only through smart phones and tablets, became the determinative factors in the TCA's market definition. By considering these two aspects of Hopi's services, the TCA differentiated services of Hopi from the general functions of online and even mobile marketing, and mainly focused on the usage of data acquired by Hopi for developing its services. In addition, the TCA did not accept the arguments of parties about figuring out Google, Twitter and Facebook as substitutes of Hopi by having the potential to introduce any mobile application easily due to wide-scale of data in their possession. Moreover, according to the TCA, these social media platforms and search engine company have not even constituted any potential competitive pressure on Hopi. 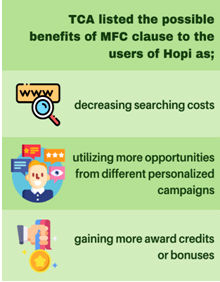 Therefore, regarding all those arguments, the TCA did not agree with the proposal of parties to define the relevant product market as mobile marketing services but defined it as "personalized marketing applications for smart phones."

After the market definition, the TCA stated that the agreement between Hopi and Migros shall not benefit from the block exemption provided under the Vertical Block Exemption Regulation numbered 2002/2 since market share of Hopi in "personalized marketing applications for smart phones" market is above 40%. Moving on, the TCA conducted an assessment for an individual exemption under Article 5 of the Turkish Competition Act. Parallel with the relevant EU legislation, the Turkish Competition Act allows the TCA to exempt agreements between undertakings limiting competition under sustaining certain conditions simultaneously.[6] When assessing the first condition of individual exemption in relation to new developments in the production of goods and services, the TCA mainly focused on data sharing clauses of the agreement. According to the TCA, limited information sharing between parties of the agreement about Hopi agreement details of customers (i.e. Hopi membership date, Hopi Id number, Hopi agreement version) and personal contact information details would contribute to the efficiency of Hopi's campaigns and hence to the welfare of consumers through diminishing operational cost and enhancing quality of service provided by Hopi.

Apart from welfare increase of consumers due to new developments in the market, the TCA examined the effects of MFC clause in the agreement in order to evaluate the second condition of individual exemption stated under Article 5 of the Turkish Competition Act. Due to the agreement between parties, Migros has committed to offer the best proposals to Hopi at least as well as to the competitors of the undertaking. Since this commitment of Migros was accepted on behalf of Hopi in general by the TCA, the Authority listed the possible benefits of MFC clause to the users of Hopi as decreasing searching costs, utilizing more opportunities from different personalized campaigns and gaining more award credits/bonuses.

In assessing the fourth condition, the TCA declared that MFC clause in the agreement will have the possibilty to decrease operational costs and stemmed mainly from the necessity of realization of investment in the medium- and long-term. Additionally, the TCA indicated that exclusivity clause and data sharing will contribute the parties to provide more personalized campaigns to their customers, hence increasing the possibility of meeting the expectations of consumers and increasing the success of marketing operations. Therefore, the final condition for the individual exemption is met by the agreement between Migros and Hopi, and the TCA accepted the request of Migros for individual exemption. 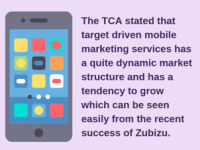 All things considered, it can be said that the TCA put an emphasis on the determination of relevant market for the operations of online platforms both in deeply recognizing the characteristics of platform businesses and also in identifying true parameters of competition in its assessment of such markets.

[3] The term "two-sided market" was introduced by Rochet and Tirole. According to the authors, the term refers to situations in which firms provide goods or services simultaneously to two interdependent groups of customers (OECD, Policy Roundtables 2009, Two-sided markets).

[5] The TCA benefitted from the studies of some outstanding scholars including Damien Geradin, Lapo Filitrucchi and David Evans.