The matter was an appeal against the decision of the Full Court upholding an opposition in terms of section 10(14) of the Trade Marks Act 194 of 1993 ("the Act") to the registration of the Appellant's trade mark applications for the mark PEPPAMATES in the face of the Respondent's PEPPADEW trade mark registrations.

Section 10(14) deals with marks which are identical or similar to an existing registered trade mark, filed in respect of the same or similar goods/services, and which are likely to deceive or cause confusion in the marketplace.

Both marks were filed in device format, i.e.: 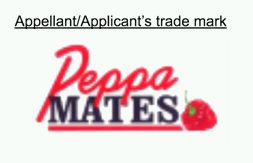 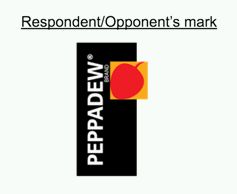 The Respondents contended that the dominant element, PEPPA, which appeared in both marks was a distinctive element, as it did not appear in a dictionary (although the word PEPPADEW does, albeit with the " symbol). They maintained that there were thus two distinctive elements to their trade mark, namely the word PEPPA, which was combined with a side view of a single rounded pepper and stalk device.

Both the Court a quo and the full Court upheld the Respondents' contention that there was a high degree of similarity between the marks, such that when the words DEW and MATES were removed, there was a likelihood of confusion or deception.

The Appellant, however, argued that the word PEPPA is in common use, and is merely a variation of the word "pepper". It thus could not be considered distinctive or invented in respect of foodstuffs in general. In addition, the word/element PEPPA appeared in other trade mark registrations, some of which pre-dated the Respondents' marks. The elements MATES and DEW cannot simply be discarded or ignored, as they served to differentiate the respective marks.

Furthermore, the Respondents' device is simply a descriptive rendering of a sweet piquante pepper. The Court and full Bench had effectively granted the Respondents a monopoly in respect of a descriptive pepper device coupled with a descriptive word or element. This is analogous to, for example, a supplier of grapes not being able to use a device of a bunch of grapes alongside its name and trade mark.

The Court held that granting a monopoly in respect of the word or prefix PEPPA in effect would lead to the absurdity of including use of the word "pepper", which is in common usage. Even ordinary words such as "peppermint" could be affected by the monopoly.

In the seminal and oft-quoted Plascon-Evans Paints Ltd v Van Riebeeck Paints (Pty) Ltd 1984 (3) SA 623 (A), Corbett JA clearly stated that the main or dominant features of a mark, as well as the general impression and striking features, were all factors to be considered in deciding whether there was a likelihood of confusion or deception.

The ruling also enforced the judgment in Cochrane Steel Products (Pty) Ltd v M-Systems Group (1272/2016) [2017] ZASCA 189 (13 December 2017), in which the SCA held that the VU in the composite mark CLEARVU was a deliberate misspelling of the ordinary word "view", and that the Appellant's attempts to claim the word as an invented or coined word were not convincing. The SCA stated that the phonetic equivalent of a non-distinctive word is itself non-distinctive.

In upholding the PEPPAMATES appeal, Mathopo JA stated at paragraph [22]:

"[22] I agree with the appellant that PEPPA is an adaptation from the word pepper, obviously chosen because the product to which it was first attached was a pepper. Its use conjures up an image of a pepper. In conjunction with the pepper device, it will be understood as referring to a product with peppers. The distinctive element for trade mark purposes is therefore the suffix DEW, which is wholly different from MATES. Because 'PEPPA' phonetically sounds like 'pepper', the likelihood of confusion will not arise, especially if it is used in combination with another word such as DEW or MATES. There is equally no force in the argument that exclusivity in the word PEPPA lies in the combination of the mark with a pepper device. The word PEPPA cannot enhance in any way the exclusivity of the distinctiveness of the elements of the mark. To my mind the depiction of the pepper in the mark only serves to highlight the descriptive nature of PEPPA. A depiction of a pepper is, like the word itself, descriptive. PEPPA is not only a variant spelling of the word 'pepper' but is also applied to a wide range of products offered by various other parties throughout the world. If a monopoly is granted in respect of PEPPA it is hard to see how it would not extend to the use of pepper as a prefix, as in pepperoni, pepperpot (a West Indian stew), pepperwort or pepper sauce, all of which are in common usage. As the respondent's registration extends to confectionery peppermint would also be affected. But one cannot monopolise the commons of the English language in that way."

The SCA judgment therefore establishes, or confirms, that where the prefix or first element of a word is in common use, the suffix or last element can be the distinctive element for trade mark purposes.