by Spoor & Fisher
Spoor & Fisher
0 Liked this Article
To print this article, all you need is to be registered or login on Mondaq.com.

The Madrid system, governed by the Madrid Agreement2 and Madrid Protocol3 is designed for trade mark owners to secure protection in several countries by a single registration in their national Trade marks Office, followed by a deposit with the International Office at WIPO in Geneva, designating the other member states where protection is sought. In territories where it is effective, the International (Madrid) trade mark registration ("ITMR") provides a simple and inexpensive form of protection.

Because of these advantages 85 trade mark jurisdictions are currently members of the Madrid Union4, including 14 on the African continent (Algeria, Botswana, Egypt, Ghana, Kenya, Lesotho, Liberia, Morocco, Mozambique, Namibia, Sierra Leone, Sudan, Swaziland and Zambia) plus the island states of Madagascar and Sao Tome & Principe. See map at the end of this review.

Tunisia, which withdrew from the Madrid Agreement in 1988, has announced its intention of joining the Protocol.

ITMRs are not necessarily valid and enforceable in all African countries which have joined the Madrid arrangements. Complex issues are arising in several of them as noted below.

Under long-established laws and practices, ITMRs designating these countries are duly processed, recognised and effective.

An international agreement can only become part of the domestic law of a subscribing country, when it has expressly been enacted into that national law by an Act of Parliament.

The provisions of any international treaties to which [country] is a party shall apply to matters dealt with by this [Act] and, in case of conflict with any provisions of this [Act], shall prevail over the latter.

The Madrid Agreement having been applicable to Egypt since 1952, the Protocol became effective on 3 September 2009. The relationship between Egypt's national laws and treaties such as Madrid and PCT has been debatable. It is thought by some that British dominance in the 19th and early 20th centuries created a common-law heritage with the result mentioned under paragraph 2.1 "The Orthodox Doctrine", above. On the other hand, a written constitution was adopted in 1980; and the Madrid treaties, like PCT, are recognised in practice without specific provisions in domestic law. Relatively recently, the fact of official PCT recognition was illustrated by a notification dated 6 June 2009 clarifying the base dates from which annuities are calculated.

Kenya, a common-law country, joined the Agreement and Protocol in 1998 but national law was not changed until 22 August 2003, when the Trade Marks (International Registration) Rules came into effect. It was thought for a time that ITMRs designating Kenya did not become effective until that date, and earlier designations could not be relied on. However, it is now established that pre-2003 ITMRs are enforceable but satisfactory details of many of them may be invisible to a searcher at the Kenya Industrial Property Institute (KIPI). Full particulars are however available from the WIPO/Madrid ROMARIN search system. Detailed advice on the application of Madrid in Kenya is available on request.

Liberia acceded to the Agreement in 1995 and the Protocol on 11 December 2009. It was formerly grouped with the common-law jurisdictions in paragraph 2 above because the law, codified in 1972, made no provision for ITMRs.

An Industrial Property Act, dated 2003 but never passed by Parliament, was adopted by executive decision of the Industrial Property Office with effect from 1 January 2009. In it, the Madrid arrangements are recognised by implication, under the provision that:-

International treaties to which Liberia is a party shall apply to matters dealt with by this Act an, in case of conflict with provisions of this Act, shall prevail over the latter.

Work is in progress on a further draft industrial property code which is based on the WIPO model and, it is hoped, may resolve Liberia's Madrid status among other issues.

These states have civil-law heritages. Madagascar joined the Protocol with effect from 28 April 2008. Mozambique acceded to the Agreement and Protocol in 1998. Although there are no detailed national regulations for dealing with ITMRs at the national offices, they are being processed. The Industrial Property Offices make it clear that they are recognised and will be enforced.

The terms of any international agreement relating to patents, industrial models or designs, collective trade marks and indications of provenance or names of origin to which Sao Tome & Principe is a contacting party are applicable [to Sao Tome e Principe], and in the event of divergence between them and this law, they shall prevail.

MAP of Madrid members in Africa and surrounding islands 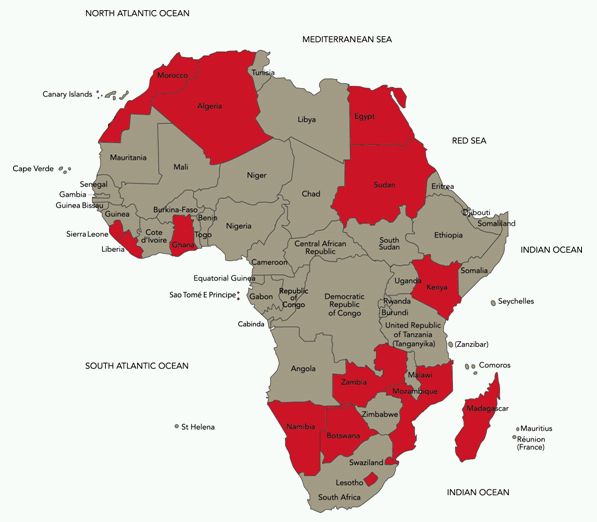 See notes in accompanying text as to efficacy of some memberships.

* This review by Mac Spence, consultant with Spoor & Fisher Jersey, supplements and modifies earlier discussions on our web-site www.spoor.com.

2. Madrid Agreement Concerning the International Registration of Marks (1891) amended through 1979.

3. Protocol Relating to the Madrid Agreement Concerning the International Registration of Marks (1989), amended in 2007.

5. Botswana is considering a new law which is expected to regularise its status.