BPR 227 deals with an area that National Treasury and SARS have identified as a problem, namely where a shareholder disposes of its shares through means of a share buyback as opposed to selling the shares outright to a third party. Before dealing with BPR 227 we will explain the background to this issue, the steps taken by National Treasury and SARS to deal with this issue and why BPR 227 was treated differently.

Published SARS rulings are necessarily summaries of the facts and circumstances. Consequently, BPR 227 (and this article discussing it) should be treated with care.

At other times, a would-be investor can acquire shares buying previously-issued shares from an existing shareholder, in which case the company will not usually receive anything. A purchase therefore involves the acquisition of shares that have already been issued. The proceeds of the sale belong to the seller of the shares.

The distinction between purchase of existing shares and subscription for an issue of new shares is important for capital gains tax and dividends tax purposes. The example below illustrates this distinction. 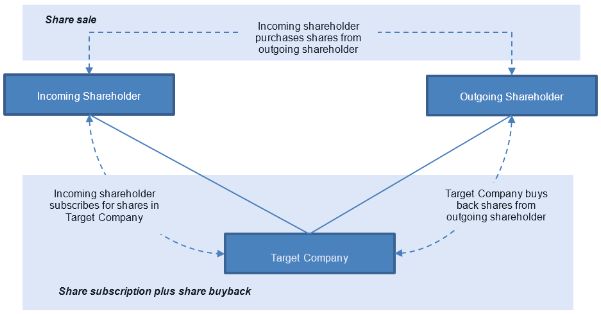 The outgoing shareholder can avoid capital gains tax partially or completely by opting to sell its shares back to the Target Company rather than selling its shares to the incoming shareholder. The tax benefit associated with this approach is illustrated in the table below. 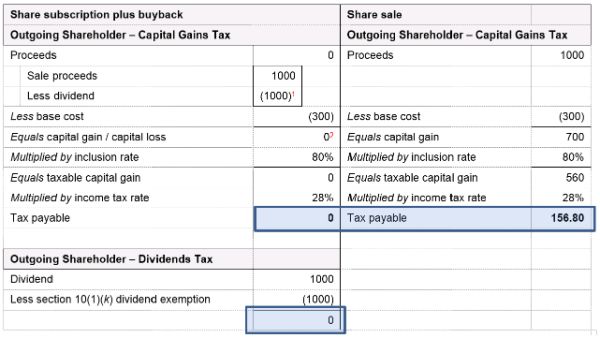 However, it is anticipated that a portion of the share buyback consideration (i.e. at least the subscription price for the shares) would amount to a reduction in contributed tax capital and thus not constitute a dividend.

Recognising the loss to the fiscus of the share issue-buyback combination, National Treasury included a reference to these transactions deep inside the 2016 budget review document. The budget review elaborates on some of the proposals contained in the Minister of Finance's budget speech, clarifies certain matters and presents additional technical proposals. The budget review dedicated the following paragraph to this issue:

One of the schemes used to avoid the tax consequences of share disposals involves the company buying back the shares from the seller and issuing new shares to the buyer. The seller receives payment in the form of dividends, which may be exempt from normal tax and dividends tax, and the amount paid by the buyer may qualify as contributed tax capital. Such a transaction is, in substance, a share sale that should be subject to tax. The wide-spread use of these arrangements merits a review to determine if additional countermeasures are required." (our emphasis).

Taxpayers will have to wait until the publication of this year's tax amendment legislation to determine whether the proposed review will result in additional countermeasures. For now, it is opportune to speak briefly about the existing countermeasures that are in place to deal with these arrangements.

The main purpose of mandatory disclosure rules is to provide early information regarding tax planning schemes and to identify the promoters and users of those schemes. On 16 March 2015, the Commissioner for SARS issued a public notice ("the 2015 notice") setting out a list of reportable arrangements.

On 3 February 2016, the Commissioner issued a further notice which replaced, with effect from its date of publication, all previous notices. The 2016 notice repeats the reportable arrangement contained in the 2015 notice.

A basic design principle underpinning mandatory disclosure requirements is that they should be clear and easy to understand in order to provide taxpayers with certainty about what is required by the regime. Lack of clarity and certainty can lead to failure to disclose (and the imposition of penalties), which may increase resistance to such rules from the business community.

In addition to the mandatory disclosure requirements, SARS may invoke the substance over form doctrine or the general anti-avoidance rule as existing countermeasures against these type of transactions. Much has been written about these provisions and I do not think it necessary to repeat their essential features in this article. Armed with these existing countermeasures, it remains to be seen what National Treasury and SARS has in mind with their "additional" countermeasures.

A binding private ruling is binding advice that sets out how a tax law applies to an applicant taxpayer in relation to a specific scheme or circumstance. A binding private ruling applies only to the applicant identified in the ruling. As stated, the published ruling only gives the readers a glimpse of the facts and circumstances contained in the applicant's ruling application. 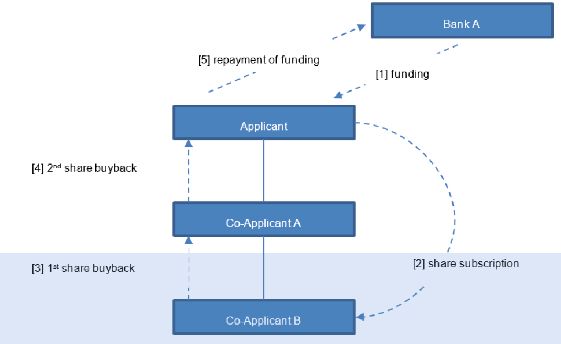 The proposed transaction will be implemented as follows:

The rulings given by SARS in respect of steps [2] and [3] were as follows:

The published ruling is frustrating in this respect because it does not explain the commercial rationale why the parties embarked upon a share buyback as opposed to the sale of shares other than stating that the parties considered that a share subscription transaction followed by two share repurchase transactions will be the most commercially efficient manner for implementing the applicant's exit, as a shareholder, from co-applicant A.

What the published ruling does reveal, is that if parties can demonstrate a commercially motivated rationale for the particular sequence of their transactions then it is possible (with SARS' approval) to opt for the share issue – share buyback combination rather than the share sale route.

2 Generally, if a dividend is not subject to either normal tax or dividends tax it is likely that paragraph 19 of the 8th Schedule to the ITA 1962 will limit any capital loss on disposal of the shares.