Most Read: Contributor South Africa, May 2020

Billionaire Mark Shuttleworth certainly did well when he disposed of his business – he realised approximately R4,2bn.

This wasn't the first time Shuttleworth had to pay a 10% levy of for wanting to take assets out of the country. Under the rules in place governing exchange control, he was required to submit an application to transfer his blocked assets out of South Africa via an authorised dealer, that is, a commercial bank authorised to deal in foreign exchange, and submitted an application via his bank, namely, Standard Bank.

Shuttleworth wanted to know what lay behind the decision to impose a 10% levy and the Reserve Bank responded by pointing to the Minister of Finance's Budget Speech of February 26 2009 which contained details whereby emigrants' blocked assets were to be unwound and amounts of up to R750 000 would be eligible for removal from South Africa without charge.

It was indicated that those emigrants who wished to take out more than this would have to apply to the Reserve Bank's Exchange Control department for approval and would be subject to an exiting schedule and an exit charge or levy of 10% of the amount.. Shuttleworth sought relief from the court (MR Shuttleworth v South African Reserve Bank and Others, Case No 307 09/210, North Gauteng High Court, as yet unreported) that the 10% levy paid by him was unlawful and should be returned to him and that certain provisions of the law and the regulations regulating exchange control did not comply with the Constitution ( Act 108 of 1996), as amended, and should, therefore, be found to be unconstitutional.

Currency and Exchanges Act of 1933

It is appropriate to point out that the legal framework regulating exchange control in South Africa flows from the provisions of the Currency and Exchanges Act (9 of 1933), and the regulations, rules and orders which have been issued in terms of that statute. It is thus clear that the Act was enacted long before the dawn of the constitutional democracy in South Africa and the Bill of Rights.

The Currency and Exchanges Act was introduced to amend the law relating to legal tender, currency, exchange and banking. It also creates a framework regulating exchange control and has thus been in place on the statute books for many years. It did not originate, as is often thought, as a consequence of the Sharpeville massacre of 1961. The legislation was designed in such a way that it can be amended quickly and easily by way of the issue of regulations in order to address developments in the economy and the currency markets so as to protect the South African currency.

Shuttleworth sought an order reviewing and setting aside the Reserve Bank's 2009 decision to impose a 10% levy as a condition permitting the transfer of his remaining blocked assets out of the country. In other words, he sought a refund of the R250 474 893.50 levy paid together with interest.

Currently under existing policy persons wishing to seek approval from the Reserve Bank regarding transactions dealing with foreign exchange are required to communicate with the Reserve Bank via authorised dealers. Shuttleworth sought an order that this policy of refusing to deal with members of the public directly in the exercise of its delegated powers under the regulations was inconsistent with the Constitution and invalid.

In the judgement, this was referred to as "a closed-door policy" and the court had to determine whether that process was procedurally right and fair.

The Reserve Bank raised the question whether the proceedings before the court were academic or moot in light of the decision by the Minister to do away with the 10% levy on blocked assets or funds. In considering this question, the court looked at the merits and historical background of the exchange control system and pointed out that it is important that authorities are able to react quickly and without delay to changes in the international monetary system. This is achieved through the current structure in place of empowering an official to issue regulations and has been a central feature of exchange control in South Africa since 1933.

The Exchange Control Department was subsequently replaced by the Financial Surveillance Department and exists in order to protect the value of the Rand in the interests of a balanced and sustainable economy in South Africa. The purpose of the Financial Surveillance Department within the Reserve Bank is to regulate the inflow and outflow of capital in terms of the powers granted to it by the legislature. The Department also comprises an investigations division, which is required to investigate alleged contraventions of the exchange control regulations and to recoup losses on the country's foreign currency reserves.

The judgement contains a useful summary of the inception of exchange control in South Africa and the refinements made over the past number of years.

The court held that the issues raised by Shuttleworth were neither academic nor moot, that he had an interest in the court ruling on those issues and, in addition, it was in the public interest that the issues raised in his challenge on the various regulations and sections of the statute regulating exchange control should be considered.

The primary legislation regulating exchange control is the Currency and Exchanges Act of 1933, and any regulations that may be promulgated. Furthermore, the Minister of Finance is empowered to issue various orders, rules, exemptions, forms and procedural arrangements. Regulations may be issued by the Minister in terms of s9 and, furthermore, he may delegate such duties or powers to any person in terms of regulation 22E of the exchange control regulations.

Shuttleworth sought to argue that the requirement that members of the public must approach the Reserve Bank via their bankers was contrary to the obligations imposed on the public administration by s195 of the Constitution, as well the foundational values of accountability, responsiveness and openness of Section 1 of the Constitution. The Reserve Bank pointed out that the exchange control rulings are amended from time to time by way of exchange control circulars made available to all authorised dealers; the contents thereof may be made available to the public. In addition, the Exchange Control Manual is published by the Reserve Bank on its website as a general guideline for the public in an attempt to provide a general understanding of the purpose, scope and operation of the exchange control system.

In the result, the court found that the so-called "closed door policy" was lawful and complied with the Constitution. In addition, the court declined Shuttleworth's request to direct that the 10% exit levy paid by him be refunded on the basis that the exchange control circulars issued were valid and did not violate the Constitution.

The decision to impose the 10% exit levy was not made by the Reserve Bank itself, but by the Minister of Finance, who had the authority to make that decision. Shuttleworth sought to argue that the regulation imposing the 10% levy had not been approved by parliament but this argument was rejected on the basis that the regulation did not constitute the making or promulgation of a regulation intended to raise revenue or tax as envisaged in s9(4) of the Currency and Exchanges Act but was rather a measure to protect the currency of South Africa.

The court accepted that the 10% exit levy was imposed as a means of restricting the export of capital from South Africa and was valid under the Constitution.

Court's decision on the other challenges made by Shuttleworth

The judgement deals with the various challenges made by Shuttleworth insofar as various regulations and sections of the Currency and Exchanges Act are concerned and these are summarised in the table set out below: 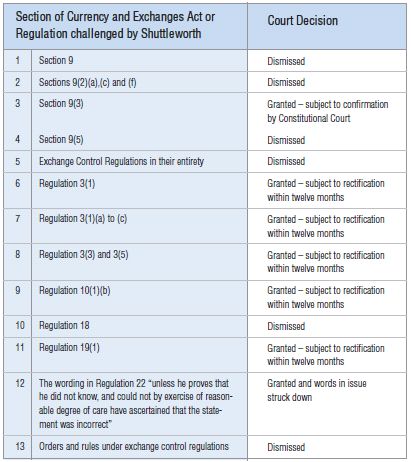 The court concluded that the issues raised are important from a constitutional point of view. Its decision was not only of importance for Shuttleworth but also for the Reserve Bank and the Minister of Finance. Ordinarily, the court directs that the costs shall follow the outcome of the decision, in the Shuttleworth case, the court ordered that each party must each pay his or her own costs.

On August 2 2013, the Financial Surveillance Department of the South African Reserve Bank issued a circular in response to the judgement. The circular summarises the decision of the court and points out that the court rejected Mr Shuttleworth's contention that the exchange control system as a whole and the legislation and regulations, which comprise the system, are unconstitutional. The circular informed authorised dealers that the effect of the judgement of the court is that the exchange control system and its administration remains unchanged.

It has been reported in the media that Shuttleworth has decided to seek leave to appeal the decision handed down by Legodi J, and it is therefore likely that the case will proceed to a full bench of the North Gauteng High Court and, ultimately, to the Constitutional Court for final adjudication.

It is clear that certain regulations governing exchange control have been found wanting and that sections of the Currency and Exchanges Act must be refined to comply with the Constitution. This does not come as a surprise, taking account of the fact that the Currency and Exchanges Act was enacted in 1933, long before the Bill of Rights and the dawn of the democratic era of constitutional supremacy.