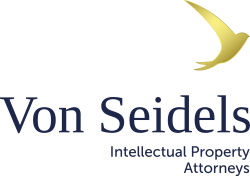 by
Von Seidels
0 Liked this Article
To print this article, all you need is to be registered or login on Mondaq.com.

According to the International Energy Agency (IEA, 2011) the quest for improving cost competitiveness for Renewable Energy Technologies (RET) brings with it a range of investment opportunities. Cost reductions in wind and solar especially are expected to lead to the wider roll-out of such technologies.

As depicted in figure 1, the stage of development and technology-life-cycle of various RETs has implications for the nature of government support as well as industry investment in terms of commercialisation. The respective roles of government and the private sector are pointed out in Technology Diffusion through Intellectual Property Rights: Innovating to Combat Climate Change (Du Plooy, 2013)1. Du Plooy contends that general early stage research is best supported publicly, while in later stages the private sector is more efficient in commercialising technology. Harvey (2008)2 stated that "governments are best placed to fund basic research, spreading their funding quite widely, whereas the development of new marketable technologies and products is most likely to succeed quickly in the private sector". 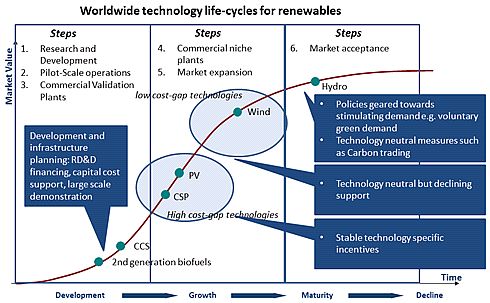 Technologies such as Photovoltaic (PV) and Concentrating Solar Power (CSP) are still high-cost gap technologies and therefore it is not surprising that the bulk of R&D investment in renewable technologies is focused on solar.

The opportunity in the South

The South African government has made its intention clear for wider support of renewable energy with 42% (17 800 MW) of new generation capacity added over 2011-2030 from renewables (DoE, 2011)4. This makes South Africa the ninth leading destination worldwide for clean energy investment amongst the Group of 20 countries (G-20). 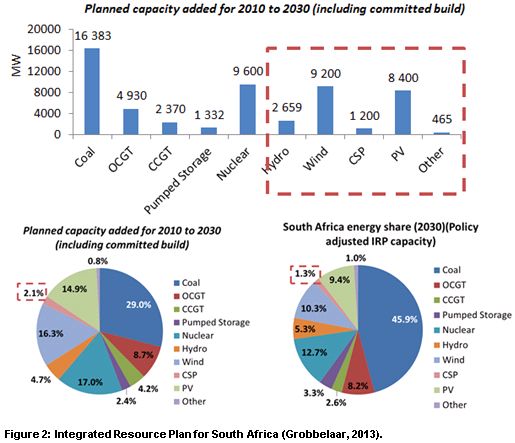 South Africa has one of the best solar resources worldwide and in some instances this is almost 50% better than locations in Spain and California where CSPs are already in operation (Gauché et al., 2012a)5. South Africa has a mature manufacturing sector and industries that may offer opportunities for the development of a green cluster. Furthermore, a 5 GW Solar Park is planned in the Northern Cape province of South Africa, to be developed over the next 20 years.

The country's strong solar resource as well as supportive RET policies has, for instance, led to Google's recent $12 million investment in the Jasper Project with 96 MW capacity – which upon completion will be the largest PV plant in Africa with electricity generation that will power 30 000 households in South Africa.

Another example of an investment opportunity:

Consider a South African invention in the CSP field. Although the CSP market is small compared to the wind and PV sectors, CSP may be particularly relevant to the South African market, where an analysis by the South African Renewables Initiative estimates that 49% of the value of a CSP plant could be supplied locally (Du Plooy, 2013). In a CSP plant, the drive that positions the mirror accounts for about 20% of the cost of the plant and halving the cost of the drive could lead to a 5% reduction in cost of the overall plant. An invention by South African engineer, Joseph Steele, called the Kimberley Mechanism provides a cost saving planetary gear that is effectively made from a profiled plate. Relying on the patent registration of his Intellectual Property as equity, the inventor hopes to secure finance for its development. In a further development, two CSP stations are currently being constructed by a partnership of Spanish developer Abengoa and the Industrial Development Corporation in the Northern Cape (Du Plooy, 2013).

Intellectual property and protection in Africa and South Africa

However, despite this future growth opportunity, the Patents and Clean Energy Technologies in Africa report by the European Patent Office (EPO and UNEP, 2013)6 found that less than 1% of patent applications relating to RETs or so-called Clean Energy Technology (CETs) are filed in Africa. South Africa is the dominant market for the bulk of patenting activity that targets Africa. South Africa's special position amongst developing African nations with regard to patents shows that, in contrast to other developing nations, patents are likely to be a major consideration in decisions to exploit RETs.

As outlined (EPO and UNEP, 2013), the breakdown of the 533 patents filed in South Africa over 1980-2009 also reflects the investment in technology development within solar as well as wind. 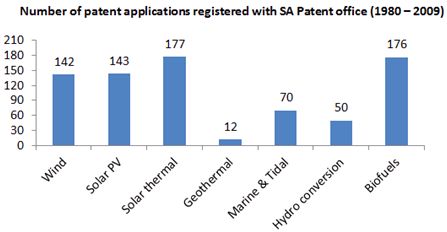 The important role of patents in the successful commercialisation of Renewable Energy Technology (RET) depends, amongst others, on whether patents encourage innovation, and to what extent they act as barriers to access technologies. The transfer of technology through patents is considered a good measure of determining whether patents in the RET field encourage innovation, or act as barriers to access these technologies.

The patenting system has been criticised for favouring larger players, being inherently monopolistic and to be legalistic. These criticisms have especially been debated within the pharmaceutical industry where the patent holder of a drug that may not have any substitutes is in a very strong market position and may be able to charge a price well above production cost (Barton, 2007)7. Such a patent holder would typically rely on patents to increase its monopoly and exclude others from entering the market.

On the other hand, the patent system is widely acknowledged as an enabler for the provision of information, technology transfer and standardisation and licensing. Within the RET sector, there is a high degree of competition between a number of patented products resulting in reduced royalties and reduced monopolies. The role of patents in the RET sector is thus a reduction in monopolies and consequently patents are likely to be a major decision factor to exploit RET in South Africa.

Therefore, even though the relatively small investment in patents filed in Africa may offer opportunities for the free exploitation of such technologies, it may lead to source companies' reluctance to invest and offer know-how to promote technology transfer. Furthermore, even though developing countries may have many opportunities to exploit inventions where patents have not been granted, the lack of skills, inadequate investment supply chains, and economies of scale make it difficult to use the inventions for developing manufacturing capacity within these countries (IRENA, 2013)8.

Regarding cost of patents, Du Plooy (2013) supports that for South Africa, "the real issue is not the price of patents, but the lack of capital and management capacity. This cost is much higher when it comes to accessing technology for the purpose of manufacturing. However, this part of the value chain is less significant to developing countries, as manufacturing provides a relatively small share of the overall employment benefit of renewable energy roll-out".

Considering the nature of the South African economy, it has been described as a technology colony - a country where the innovation system is still at a level of development that is mostly dependent on foreign technology. A weak flow of technology exists from the research-side of the product development cycle to the final products, as most products are being imported with a strong flow of products from the developed world into the technology colony (usually by multi-nationals or subsidiaries), and usually as licensed product designs and processes, assemblies and final products. Technology transfer is therefore important here.

In terms of the transfer of technology, in Intellectual Property and Access to Clean Energy Technologies in Developing Countries, Barton (2007) identified three modes of technology transfer: providing products that incorporate the technology; licensing the capability to produce such products; and developing national capability to research and produce products independent of a licensor or at least in a relatively equal position with the licensor. In a South African context, a study by Hascic et al. (2010)9 has shown a significant flow of knowledge across countries in the solar PV, wind energy and biofuels sectors. China, South Korea, Brazil and South Africa are the most important recipient countries of these technologies (IRENA, 2013).

The transfer of RET is closely related to the potential markets for RET in South Africa as a developing nation. Barton (2007) identified three key markets, namely: the market for enabling the country to reduce its CO2 emissions; for providing carbon offsets; and for exporting renewable products (e.g. biofuel) and equipment (e.g. wind turbines or heliostats) in which South African industry may become integrated with the global industry as a supplier.

Towards industry development in South Africa

High hopes for achieving positive benefits through technology transfer exist, including the establishment of a renewable energy manufacturing cluster, also providing opportunities on the supply-side for expanding the innovative capacity and investment in R&D. Some concerns do exist, however, regarding the impact of excessively inexpensive technology being developed elsewhere.

Specific technological capacity in South Africa for the CSP industry especially is still for simple and standardised components. Some emerging capacity however exists in cooling systems, thermal energy storage and heliostats, but the potential for local manufacturing development of technology will mostly depend on volume and scale.

Provided that South Africa can address infrastructural issues around water scarcity and expanding the grid to regions with a good solar resource and availability of appropriate financing schemes, huge potential remains for the country to create a market for South African technology and development of energy projects in neighbouring states.

9.Hascic, I, et al. 2010 "Climate Policy and Technological Innovation and Transfer: An Overview of Trends and Recent Empirical Results" OECD working papers no. 30.