by Wayne Jansen
KPMG, South Africa
0 Liked this Article
To print this article, all you need is to be registered or login on Mondaq.com.

The recent news of the Association of Mineworkers and Construction Union's (Amcu's) strike at three platinum mines, just the latest in waves of action and challenges to sustainability, underlines the need for a new path for the sector, says Wayne Jansen, KPMG's global head of mining.

There are also the issues of decreasing productivity and the continued devaluation of the rand to consider, he says. But with labour issues top of mind in the sector, the strikes are "a clear indicator that there is a need for improved dialogue in the industry," says Jansen.

"A successful mining industry in South Africa is in the interest of all stakeholders that are directly and indirectly linked to it. Yet, the industry finds itself in a difficult time, with a future that has perhaps never before been so uncertain. Charting a new path for the sector will not simply happen on its own," continues Jansen. "It requires a collaborative effort amongst all stakeholders, bound together by a common purpose."

Africa was not well positioned to benefit fully from the last economic super cycle, which began in the 1990s, ended in 2008. However the beginnings of economic recovery in the developed nations spells the potential start of the next super cycle of growth, says Jansen. 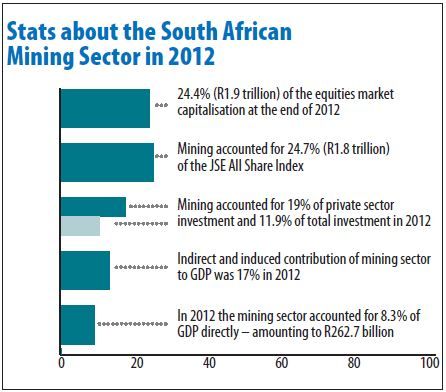 "As a continent, we are now better placed to take advantage of the renewed growth in the global economy but we must overcome some major stumbling blocks, particularly in the mining industry. Now is the time to ensure that the building blocks are in place." These building blocks include components of the national infrastructure development plan, part of the ambitious national development plan (NDP) for South Africa.

Minister of economic development Ebrahim Patel has said that the plan is "aimed at reversing the spatial, social and economic distortions of the colonial and apartheid era. As well as improving living standards, it aims to create economic opportunities in underdeveloped areas through improved roads, rail, ports and broadband, as well as water and energy infrastructure.

In his department's annual report for 2012/2013, the minister said: "In the financial year ending March 2013, the estimated (unaudited) spending on infrastructure across the state was more than R200-billion.

"If current trends continue, the administration is expected to have spent about R1-trillion by the end of its term of office in 2014, doubling the achievement of the previous administration and 2.3 times higher than spending in real terms at any five year period in more than 40 years.

"Construction of infrastructure under the plan monitored by the PICC sustained about 180 000 direct jobs in the past financial year. Eighteen strategic integrated projects have been developed which integrate more than 150 individual infrastructure projects clusters into a coherent package. The SIPs cover social and economic infrastructure across all nine provinces, with an emphasis on poorer regions. They include catalytic projects that can fast-track development and growth. Work is being aligned with key cross-cutting areas, especially human settlement planning, skills development and local procurement."

With three of the SIPs directly impacting the mining sector, stakeholders are cautiously optimistic that the plan, together with a will to collaborate more closely across the sector, will position South Africa to benefit from the next super cycle. However, prioritisation, integration, effective management and realistic funding models will be crucial, they note.

This article first appeared in the Mail & Guardian supplement, 31 January 2013

ARTICLE TAGS
South Africa Energy and Natural Resources Mining
POPULAR ARTICLES ON: Energy and Natural Resources from South Africa
Exporting Gold From Ghana; The Need For Due Diligence
Legalstone Solicitors LLP
Ghana is endowed with abundant natural resources, which have played a key role in the development efforts of the country. Ghana has a long history of mining especially for gold.
The Nigerian Electricity Supply Industry – Recent Developments And Prospects
Banwo & Ighodalo
With a population of approximately 186 million as at 2016, Nigeria has an installed capacity of 12,500MW and a meagre available generating capacity hovering around 7,000MW.
Breaking The Investment Barrier In Mining
LeLaw Barristers & Solicitors
January, 2004: Wole Obayomi, my boss at KPMG's Tax and Business Regulatory Services Group had written on an article...
Embedded Power Generation And Distribution In Nigeria – Legal & Commercial Realities
LeLaw Barristers & Solicitors
The success of Nigeria's planned economic growth and development is substantially hinged on improvements within the power sector.
Understanding The Uniform Demand Guarantee Rules No. 758
Sefton Fross
An example of such intervention mechanism is the creation of a priority list for accessing the available FX, including to the manufacturing and oil and gas sector.
An Overview Of The Nigerian Minerals And Mining Act 2007
Odujinrin & Adefulu
The Nigerian Minerals and Mining Act 2007 ("the Act") was passed into law on March 16, 2007 to repeal the Minerals and Mining Act, No. 34 of 1999 for the purposes of regulating the exploration and exploitation of solid materials in Nigeria.
FREE News Alerts
Sign Up for our free News Alerts - All the latest articles on your chosen topics condensed into a free bi-weekly email.
Register For News Alerts
Article Tags
South Africa Energy and Natural Resources Mining
Related Articles
COVID-19 – A New Chapter In State Sovereignty Over Natural Resources? ENSafrica
South Africa: Urgent Court Applications Relating To COVID-19 Regulatory Framework At Mines ENSafrica
Water And Sanitation Emergency Procurement COVID-19 Disaster Response Directions Published ENSafrica
MPRDA Related Timeframes Extended ENSafrica
A Panel Discussion With The Honourable Gwede Mantashe, Minister Of Mineral Resources And Energy, Republic Of South Africa Fasken
Comparative Guides
International Arbitration
Mondaq Advice Centres
Global
Investment Immigration
Global
Trademarks in SAARC Countries
More MACs
Upcoming Events
Mondaq Social Media