by Tshidi Mokgabudi
KPMG, South Africa
0 Liked this Article
To print this article, all you need is to be registered or login on Mondaq.com.

Infrastructure spending is considered to be one of the major catalysts of economic growth, development and economic activity. It can be regarded as a mechanism of generating employment opportunities for millions of unskilled, semi-skilled and skilled workers. It is also widely considered to be one of the most important factors that foreign investors take into account when making investment decisions.

In his annual budget speech, Minister of Finance Pravin Gordhan provided insight into the South Africa government's planned infrastructure spending over the Medium Term Expenditure (MTEF) period, 2012/13 to 2015/16. Minister Gordhan announced that government plans to allocate R827 billion to public sector spending on infrastructure over the next three years. In addition to the planned MTEF spending, plans to roll out a much larger set of infrastructure projects, totaling spending of approximately R4 trillion1 over the next 15 years, was announced by the Presidential Infrastructure Coordinating Commission (PICC). This initiative forms part of government's broad plan to boost economic development and growth over the long term and to make the economy more competitive.

In his budget speech, Minister Gordhan also noted that decisions on which infrastructure projects to implement would be guided by the National Development Plan (NDP):

As a country, we have only managed to spend 76% of our total planned infrastructure budget over the past three years. Addressing this underspending should be one of the first priorities the implementation of the NDP .

Looking forward to the 2013/14 to 2015/15 MTEF period, planned expenditure on infrastructure totals R827 billion. This accounts for more than 22% of the total MTEF budget period. 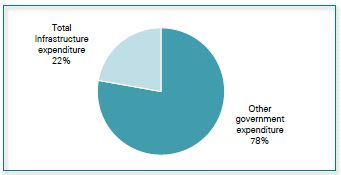 Most of the allocated spending falls under provinces and municipalities and these allocations include, amongst others:

The PICC has announced the roll-out of a massive infrastructure programme, estimated to cost more than R4 trillion over the next 15 years. This includes the 18 Special Infrastructure Projects (SIPs) and private sector projects that are part of the strategic infrastructure projects, excluding those already at feasibility stage.

About 40% of these SIP projects are in the implementation phase, while others are still subject to feasibility studies.

Infrastructure spending has been identified as one of the key pillars of the implementation of the NDP. According to the NDP, infrastructure development is not just essential for faster economic growth and higher employment, it also promotes inclusive growth, providing citizens with the means to improve their own lives and boost their incomes. Infrastructure is essential to development. 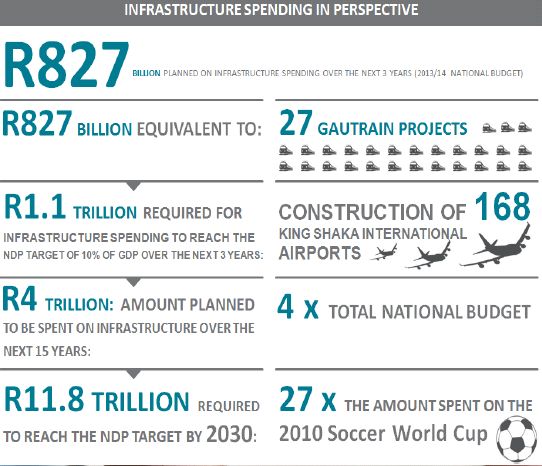 The spending gap is equivalent to an annual average of just under R100 billion over the next 3 years. This grows to over R500 billion remainder of the planned period.

In order to estimate the potential employment impact of the planned infrastructure expenditure versus the NDP infrastructure objective, KPMG modelled two scenarios. 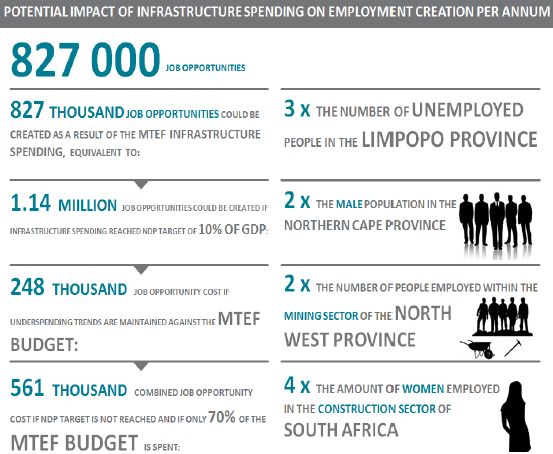 On the other hand, in the event that government succeeds in achieving the NDP infrastructure spending objective between 2013/14 and 2015/16, potential job opportunities or employment for 3.4 million people for one year, averaging close to 1.1 million opportunities per annum over the 3 years period, could be created.

With a significant portion of the infrastructure expenditure taking place within the construction sector, a large share of the employment opportunities should be created in this sector. Employment opportunities in the construction sector are typically temporary in nature and would usually only last for the duration of the construction phase. However, even though the jobs may be considered temporary in nature, it is important to keep in mind that the experience that workers could gain on these projects, would make them more employable in future.

On the other hand, the indirect and induced employment impacts that originates from the initial infrastructure expenditure, could often create more sustainable jobs, as the country will permanently be on a higher growth path that could support more jobs.

The NDP aims to create 11 million jobs by 2030 through promoting employment in labour-absorbing industries and boosting both exports and competitiveness. Based on the analysis, up to 1.1 million sustainable jobs could be added on the back of infrastructure spending in line with the NDP. This could impact long term NDP job creation objective by up to 10% to 9.9 million jobs.

In the short term, however, it is likely that there will be a shortfall of at least 170 000 sustainable jobs if compared to the NDP objective to create 1 million sustainable jobs through public sector employment programmes by 2015.

THERE IS HOWEVER, ANOTHER SIDE TO THIS COIN...

Given the South African government's track record regarding spending on infrastructure, certain elements need to be considered to determine whether or not government would be able to achieve on the job creation impacts from the planned MTEF and NDP spending objective in relation to infrastructure.

In the past, we were not able to spend what we have planned...

The latest Expanded Public Works Programme II Progress Report revealed that the programme had created 643 116 job opportunities in the 2011 financial year. This is substantially less than the approximately 827 000 annual average job opportunities based on the planned MTEF expenditure. The main reason for this difference could be underspending due to planning and funding allocation inefficiencies.

In addition, the longer we take to reach the NDP objective, the more significant the impact on job opportunities created will be in the longer term. The impact of these scenarios are summarised in the table below.

APPENDIX 1 - ZOOMING INTO THE NUMBERS

As seen in the table below, over the first five years the infrastructure spending gap is expected to be fairly small, ranging from about R80 billion and R124 billion. This implies an annual shortfall of approximately 30% of the planned expenditure. This gap is, however, set to increase steadily over the long term with shortfalls ranging from R130 billion to more than R1 trillion over the period 2018/19 to 2029/30. The latter is equivalent to the annual shortfall more than 160% of the planned infrastructure expenditure. 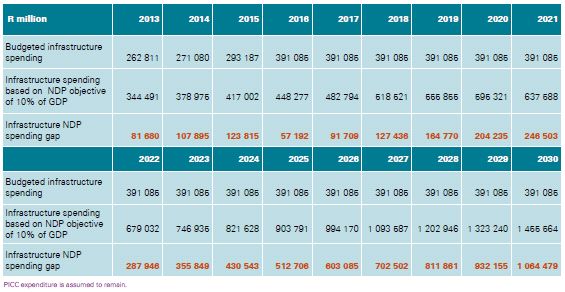 2 For ease of comparison all values where converted into 2013 prices and this is reflected in the table . The Implication of this is that the real values will be different to that reported in the budget speech and PICC planning document once converted to the same base year

4 Any expenditure that occurs outside of the country is essentially a considered a leakage out of the country therefore excluded from the economic impact model inputs.

ARTICLE TAGS
South Africa Strategy Government Policy & Public Finance Industry Updates & Analysis
POPULAR ARTICLES ON: Strategy from South Africa
Procedure For Registration Of Cooperative Society In Nigeria
Fred-Young & Evans
A Cooperative Society is a voluntary association of individuals, united by common bond, who have come together to pursue their economic goals for their own benefits.
Doing Business In Nigeria: Some Of The Incentives Available To Investors
Banwo & Ighodalo
Given Nigeria's vast human and natural resources (which position her as a frontier market and potential investment haven) and against the background of the recent rebasing of her GDP (which resulted in her emergence as Africa's largest economy), ...
Impact Of Intellectual Property Infringement On Businesses And The Nigerian Economy
PwC Nigeria
Data has shown a strong correlation between strong intellectual property rights and economic development. Strong IP rights create an enabling environment for the innovation necessary for economic stimulation.
Unlocking Nigeria's Tourism Potentials
Taxaide Professional Services Ltd
Countries such as Dubai, South Africa and Kenya have made great returns for their government in the areas of Tourism.
Federal Government Of Nigeria's 2019 Budget Of Continuity
Deloitte Nigeria
President Muhammadu Buhari provided a sneak peek into Nigeria's fiscal direction for 2019 on Wednesday, 19 December 2018, as he presented the 2019 Budget of the Federal Government of Nigeria ...
Investment Opportunities
Strachan Partners
Nigeria is the largest market in Africa and one of the fastest growing countries in the world. The country has a thriving and relatively easy business environment with numerous investment opportunities in various sectors.
FREE News Alerts
Sign Up for our free News Alerts - All the latest articles on your chosen topics condensed into a free bi-weekly email.
Register For News Alerts
Article Tags
South Africa Strategy Government Policy & Public Finance Industry Updates & Analysis
Related Articles
Africa Regulatory ENSight - Issue 2 Of 2020 ENSafrica
Ports, Transport And Logistics Sector News Round-Up, 3/2020 (3 – 14 February 2020) Bowmans
Ports, Transport And Logistics Sector News Round-Up, 2/2020 (20 – 31 January 2020) Bowmans
Africa Regulatory ENSight - 8 Of 2019 ENSafrica
Ten Things To Know About Recent Developments And Trends In Africa | May 2019 Adams & Adams
Comparative Guides
International Arbitration
Mondaq Advice Centres
Global
Investment Immigration
Global
Trademarks in SAARC Countries
More MACs
Upcoming Events
Mondaq Social Media