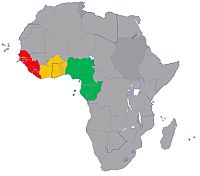 Nigeria: What Does President Buhari's Medical Tourism Mean For Political Stability And Healthcare In Nigeria?

Event: President Muhammadu Buhari travelled to the UK on Monday 8 June 2016 for a 10-day holiday according to official statements. However, his seemingly impromptu absence from key engagements as well as the emergence of a communique that he would be seeking medical opinion in relation to a recurring Meniere Disease in his left ear[1] has fuelled doubts about his good health and raised questions about the state of Nigeria's healthcare system in general.

President Buhari raised eyebrows last week when he cancelled an official trip to Rivers State. He had cancelled a similar trip to Lagos two weeks before and delegated Vice President Yemi Osinbajo to represent him at other events. The president was rumoured to be sick but the presidency, Aso Rock[2], dispelled the rumours. Then last weekend, Aso Rock announced that the president would be travelling to the UK on Monday and would see an ear specialist there. The president's spokesman Femi Adesina told reporters at the airport when the president got on the plane, "[til] the very last minute that he is travelling, the president performed the duties and functions of his office as the president. So illness is not the issue."[3]

This sounds a little too familiar for Nigerians. Former president, Umaru Yar'Adua, took many medical trips to the Middle East while he was president between 2007 and 2010. At first, people questioned his good health but Aso Rock downplayed the issue. Then the trips grew frequent and then from November 2009 he was away for months with no clear word about his condition, although there was speculation that a heart condition was the issue.

The Nigerian constitution says that if a medical panel finds that the president is permanently incapable of carrying out his duties after a resolution by two-thirds of his cabinet, the vice president becomes the new president[4]. Even though Yar'Adua was clearly incapacitated, his inner circle tried to prevent his vice, Goodluck Jonathan, from succeeding him until parliament intervened in February 2010 after civil society had heaped on the pressure. Yar'Adua died three months later.

State of Healthcare in Nigeria

Like Yar'Adua, Buhari's latest trip raises questions about the true state of his health. But it also highlights the state of Nigeria's healthcare system, if the president goes to the UK to be treated for a reported ear condition. It should also be noted that according to Dr Osahon Enabulele, the former president of the National Medical Association (NMA) and Vice President of the Commonwealth Medical Association,  Nigeria has a National Ear Centre and over 250 ear, nose and throat (ENT) specialists, who could have responded to the president's recurring ear illness but clearly, the president has displayed a lack of confidence in the system. Paradoxically, at the 56th Annual General Conference and Delegate meeting of the Nigeria Medical Association (NMA) held on 26th April 2016 in Sokoto[5], Buhari, who was represented by his Minister of Health, Professor Isaac Adewole, spoke against the practice of officials using state resources of about US$1billion each year on oversees medical care.

Up-to-date data relating to healthcare access in Nigeria is difficult to come by. Having attempted to receive figures about the state of Nigeria's healthcare system from the National Bureau of Statistics yesterday in Lagos, we were told that no current data is available.

However, figures[6] dating back to 2011 suggest that a Nigerian state typically had one healthcare facility for 5,000 people. There were also about 10,000 people per doctor and less than a million people had signed up to the national health insurance scheme (NHIS). An extension of Nigeria's healthcare woes also lies in the shortage of personnel to man its 30,000 primary healthcare (PHC) posts. As it stands now, only 2,500 PHC posts, which are the critical gatekeepers of health are functional in Nigeria according to the Acting Executive Secretary of the nation's NHIS, Mr Olufemi Akingbade[7] during a visit to the Nigerian Communication Satellites Limited.

Outlook:  Buhari's current absence from the country has drawn little public concern from our vantage point of assessing sentiment on the ground. To quote one Lagos-based colleague "There is a lot of disillusionment about his administration and so most people are simply not bothered about his trip or his health. People are more preoccupied by trying to keep their heads up in view of the biting economy".

But from the standpoint of understanding healthcare delivery in Nigeria, it is clear that supply cannot meet demand, both in terms of physical infrastructure and human capital. According to Dr Osahon Enabulele, the UK and US have over 3,000 and 5,000 Nigerian doctors working in both countries, respectively. Incentivising doctors in the Diaspora adequately could be part of the solution to plugging the human resource gap.

[2] Aso Rock is the official residence of the Nigerian president and is the equivalent of the US White House.