Jersey: The Offshore Dragon: The Increasing Popularity Of IFCs In The PRC

Following the energetic expansion of the PRC economy and assisted in part by the relaxation of PRC regulations in relation to cross-border capital flows, the interest in, and use of, IFCs by PRC companies, funds and individuals has increased strongly in recent years. The IFC entities (be they companies, partnerships or trusts) are used in international capital raisings, whether through bond issues, structured finance or Initial Public Offerings (IPOs), within the holding structures of PRC companies, or for inbound or outbound investment.

With the gradual loosening of Chinese governmental controls on raising debt offshore and the related regulations in relation to cross-border fund flow, there has been a dramatic increase in PRC companies tapping the international capital markets in the last seven or eight years. This trend was started in 2007, when the first renminbi (RMB) bond was issued in Hong Kong. From that issue, the RMB bond market or 'dim-sum bond market' developed quickly in Hong Kong. Now, these bonds, whether denominated in RMB, Hong Kong dollars or US Dollars, are typically issued by a British Virgin Islands (BVI) subsidiary of the PRC company.

Transactions are currently commonly structured so that a Hong Kong subsidiary of the PRC company (such subsidiary being higher in the structure than the BVI issuer) provides a guarantee and the PRC company will provide quasi-security by way of agreeing to keep the BVI issuer in good standing, liquid and, subject to obtaining all necessary PRC regulatory approvals, to purchase, or procure that one of its on-shore subsidiaries purchase, the equity in its offshore subsidiaries for a price equivalent to all amounts due under the bonds.

In structured finance transactions (including securitisation and CDOs) arranged in Hong Kong, the long-term favourite entity to act as the issuing vehicle in Hong Kong has been a Cayman company.

The Cayman company is set up as an 'orphan' special purchase vehicle (SPV) whose shares are held on charitable or purpose trust. This structure is to maintain the 'off-balance sheet' status of the financing and ensure that the SPV is bankruptcy remote. The majority of PRC-related securitisations to date have been domestic issuances, with no Cayman issuing entity required. However, PRC regulations permitting, it is likely that future cross-border issuances will use Cayman or other offshore issuing vehicles.

In Asia, as in the rest of the world, Cayman orphan SPVs are a favourite form of issuers for Islamic sukuk bond issuances (other than issuances by sovereigns). The US$500 million sukuk bond issued by Garuda Indonesia (Indonesia's national airline) is a recent example of such a transaction, in the Asian context.

Cayman companies have long been a popular entity for companies wishing to list on Asian stock exchanges. In Hong Kong, Cayman companies were first permitted to list in the mid-1990s. At that time, the list of approved jurisdictions (other than Hong Kong) was limited, including only the PRC, Bermuda, Cayman and the Cook Islands. The list has now been expanded to include the BVI, the Isle of Man, Jersey and Guernsey, but Cayman remains the clear favourite. Cayman companies are also listed on several other stock exchanges in Asia – including Korea, Japan, Taiwan and Singapore. Recently, PRC companies have used Cayman vehicles to list on stock exchanges in the United Kingdom and the United States – most notably the listing of Alibaba on the New York Stock Exchange which raised US$25 billion (the largest ever global IPO).

The BVI, which has many of the same advantages as the Caymans for potential listing vehicles, was first used for a listing on the Hong Kong Stock Exchange in October 2010. That IPO was by Winsway Coking Coal Holdings Ltd. and raised nearly HK$3.7 billion.

Having a Cayman listco is common in many PRC company holding structures. A simple version of the so-called 'red chip structure', which is popular in the PRC is set out in the diagram below. 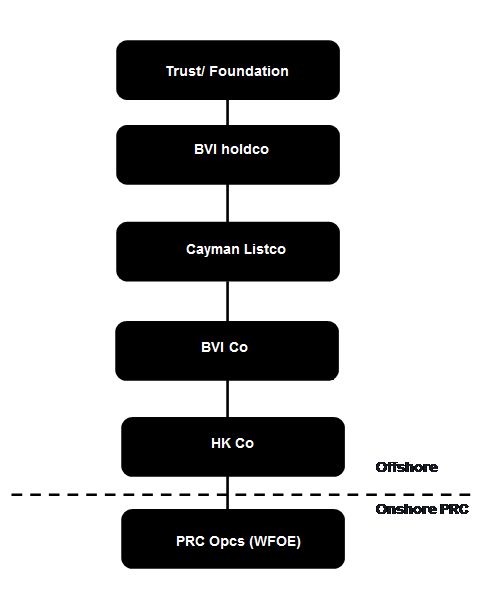 At the bottom of the structure are the operating company or companies that are incorporated in the PRC. These 'WFOEs' (wholly foreign owned enterprises) are the income-producing entities that drive the company group. One level up is typically one or more Hong Kong companies, as withholding tax paid by the WFOE on dividend payments to Hong Kong companies is reduced to five per cent. from the usual 10 per cent. Further up are typically one or more BVI companies. These BVI companies may be helpful where the group or part thereof is to be sold off. No stamp duty is payable on the transfer of BVI shares, as opposed 0.2 per cent of the consideration (payable in equal shares by the buyer and the seller) in the case of Hong Kong shares. Above the listco, the ultimate shareholder or shareholders of PRC company structures are often family trusts established by the group's founder(s). A number of jurisdictions (including BVI, Cayman, Jersey and Guernsey) offer trusts whose provisions allow founder(s) of the group or other individuals to maintain a level of control over the management of the group while also being effective from tax, succession and privacy perspectives.

For inbound private equity investment into the PRC, the typical investment vehicle is a limited partnership domiciled in either the Cayman Islands or the BVI (a PE Fund). While the ultimate target of the private equity investments are typically WFOEs or PRC joint ventures, the structures used often include BVI and HK companies as intermediary entities. Similarly to the red chip structure discussed above, these entities are interposed for stamp duty (in the case of BVI) and withholding tax (in the case of Hong Kong) reasons.

PRC companies/investors have also shown willingness to use IFC entities to make offshore investments globally, including the Americas, UK, Europe and fast-growing economies, such as India and Africa. For example, investing in real estate in the UK is often done through Jersey property unit trusts (JPUTs) because, amongst other reasons, the JPUTs can be operated as tax neutral vehicles, there is no capital gains tax and no stamp duty land tax on the transfer of units issued by the JPUT.

Traditionally, Mauritius has been the channel for foreign investment into India. However, the Indian government has recently called into question the beneficial capital gains tax position that could be obtained by investors through the India-Mauritius double tax treaty. This has led in the last year or so to Singapore overtaking Mauritius as the leading source of foreign direct investment into India.

Luxembourg Undertakings for Collective Investment in Transferable Securities (UCITs) have been a popular choice as a gateway for PRC asset managers to invest in Europe. A Memorandum of Understanding signed between Luxembourg and PRC regulators makes Luxembourg one of the few IFCs where a PRC Qualified Domestic Institutional Investor (QDII) can invest directly into regulated financial products, including UCITs. Luxembourg has also negotiated a double tax treaty with the PRC.

The benefits of companies incorporated in IFCs have been well documented – including trusted legal systems (typically based on English law), low cost and efficient company incorporation, little or no taxation, no exchange control, trusted court systems and sophisticated professional infrastructure (with an array of experienced professional service providers). In the IPO context in particular, jurisdictions such as Cayman and BVI offer other advantages as listing vehicles including minority investor protection and directors' fiduciary duty legal principles (which reinforce investor confidence), no requirement for filing of any prospectus in that jurisdiction, no prior regulatory approval required for issuance or transfer of shares and minimum annual reporting requirements.

Having more than dipped its toe into the use of IFCs in recent years, it will be interesting to see if such use by the PRC continues to develop. While the continued growth of the Chinese economy is one important factor, the PRC's further development of its regulations toward internationalisation of the RMB, cross-border capital flow and the fostering of investment will be another. A third factor will be the PRC's approach to allowing the practice of the law of IFCs on the mainland itself. To date, much of that practice has been in Hong Kong.

ARTICLE TAGS
Jersey Finance and Banking Financial Services Fund Management/ REITs Wealth Management Offshore Banking Offshore Financial Centres
POPULAR ARTICLES ON: Wealth Management from Jersey
Yet Another Shell Bank
Information Management Solutions Limited
Observers will recall that this is the Commission that oversaw the R. Allen Stanford debacle, which is still arguably the world's greatest bank robbery.
Wealth Planning Concerns During The Pandemic
Ocorian
The pandemic has caused many clients to really assess what they want their lasting legacy to be.
The Cyprus International Trusts
Patrikios Pavlou & Associates
The concept of the trust as we know it in our days dates back to the Crusaders in the 12th Century and is based on the Anglo-Saxon legal system.
Key Benefits Of Using BVI Structures
Harneys
Companies incorporated in the BVI are, by most measures, the most popular offshore holding structure in the world
Seychelles Introduces A New International Business Companies (IBC) Regime
Appleby
Fundamental changes to the IBC regime in Seychelles are imminent with the enactment of the new IBC Act 2016 (New Act).
The Appleby 2012 Offshore Round-Up: Trust Disputes
Appleby
A summary of the key decisions handed down in trust cases in the leading offshore jurisdictions during 2012.
FREE News Alerts
Sign Up for our free News Alerts - All the latest articles on your chosen topics condensed into a free bi-weekly email.
Register For News Alerts
Article Tags
Jersey Finance and Banking Financial Services Fund Management/ REITs Wealth Management
Offshore Banking Offshore Financial Centres
More Tags
Related Articles
Citywealth 60 Second Interview Appleby
Mitigating The Risk Of Trust Assets Being Treated As A Resource During Divorce: Practical Pointers In Drafting And Administering Trusts Ogier
How To Make Sure Your Family Business Survives The Transition Between Generations Ocorian
Should I Stay Or Should I Go? The Classic Clash Over Trustee Removal And Replacement Walkers
Part Five: What Are Foundations Being Used For? Philanthropy Ocorian
Comparative Guides
Alternative Investment Funds
Mondaq Advice Centres
Global
Investment Immigration
Global
Trademarks in SAARC Countries
More MACs
Upcoming Events
Mondaq Social Media