It has been a puzzle to me over the years that so few commentators really understand the specialist IFC model that is Jersey. The root cause is that so many of the conventional models designed to weigh and measure rely on data sets that are not normally found in small specialist economies, leaving commentators with little knowledge of 'offshore' which can lead to poorly informed speculation about the future. That said, the recent Standard and Poor's AA+ rating of Jersey is an outstanding endorsement of Jersey's financial strength and resilience in the context of the worst global downturn for a century.

The predictions of decline by a small, but shrill band of disaffected detractors look increasingly marginalised and irrelevant in the context of this recognition of Jersey's stability and quality.

The rating will help the States of Jersey go into the bond markets and raise debt at ultra low rates before interest rates turn upward. Provided the locks are firmly in place, allowing only borrowing for investment projects with a clear line of sight to a repayment profile, this looks like a shrewd move.

What has surprised me though is the rating agency have overlooked some of the inherent strengths of the Jersey finance industry and fallen into the 'diversification trap'. Let me explain.

Small economies whether they be countries, cities or towns cannot sustain more than a handful of significant economic activities. The mistake often made is to spread scarce resources too thin, driven by the fear of concentration risk in a hapless search for the holy grail of diversification. Whilst Jersey has reinvented itself many times, it is hard to recollect any time in its history where it had more than two or three significant industries. 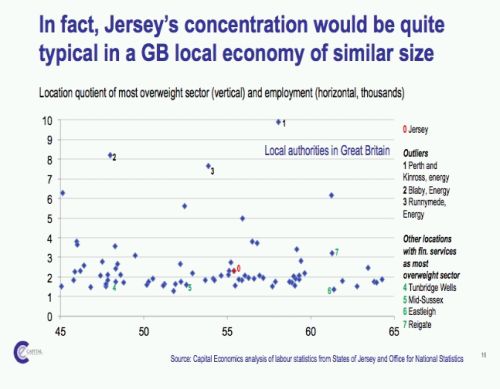 As the Capital Economics chart shows, it is the norm for small communities to have concentrated economic activity, indeed it is near inevitable, given that the ability to maintain sufficient scale in cluster skills, knowledge and infrastructure, can only be achieved in relatively few areas.

Jersey already has three substantive industries, finance, tourism and agriculture, and a nascent fourth in digital. So why are the fears over concentration misplaced?

The reason is that our finance industry supports and facilitates real economic activity. We take capital that is laying idle from a large number of origin countries and put it to work. This capital creates economic activity not in Jersey, but in the country of destination. This generates jobs, wealth, and tax receipts, as well as investment returns for the owners of the capital. Tax is paid in the country of destination on the economic activity created, and in the country of origin, as the investor accounts to his or her home authority for the investment profits or income derived. Jersey makes its revenue not by taxing the capital, but by taxing the service provider on the revenue generated from packaging, managing and administering the capital.

The world has always needed investment capital, it is a scarce resource, so centres that facilitate the efficient allocation of this capital will be always in demand. The work we did with McKinsey powerfully reinforced this view, predicting strong growth for our kind of centre long into the future.

The Standard and Poor's report referenced some risk based on moves by developed countries on tax and transparency. This is a risk for centres that have built their proposition on secrecy but not for Jersey. Too often commentators are mistaken or deliberately mislead on this point. Jersey has no banking secrecy laws, never has had as far as I can establish. There isn't any kind of arrangement, whether it be a company, a trust, a foundation, or just a plain old vanilla back account that isn't discoverable by tax authorities. What is more we hold more and richer information on who owns the value we manage than just about any country on the planet. We are streets ahead of most G20 countries in this respect.

The other surprising aspects the rating agency missed are the profit potential of our finance industry and the significance of the GVA per capita numbers. Firstly profits; of course they fall if the real economy falls, but our industry has weathered the worst slowdown in a century incredibly well. Employment has held up, firms are profitable, albeit leaner and more efficient. But when the interest rate cycle turns upward, as it surely must, more normal levels of profitability will be restored. Margin compression will give way to margin expansion, and with it improved financial performance.

But what of GVA. Bank profits (the majority) will be immediately, or eventually dividended up or remitted to parent banks. They could of course be reinvested post tax but that is only likely in an expansionary scenario, where parents don't need capital, a scenario not currently in play, but it will return.

Our banks are very strongly capitalised, others less so. Thus the value generated by bank profits post corporation tax wouldn't conventionally be in the Jersey economy. In this respect the GVA numbers flatter to deceive. Jersey isn't stuffed full of rich folks, but it is affluent and most share in that affluence, through low taxes, high social welfare benefits, and world class public services.

In the round the ratings agency is reasonably near the mark. This is a high quality, stable, blue chip jurisdiction, offering a safe and predictable environment in an uncertain world.

What does all this mean?

In simple terms, the best is probably yet to come.

ARTICLE TAGS
Jersey Wealth Management Offshore Financial Centres Wealth & Asset Management
POPULAR ARTICLES ON: Wealth Management from Jersey
Wealth Planning Concerns During The Pandemic
Ocorian
The pandemic has caused many clients to really assess what they want their lasting legacy to be.
Key Benefits Of Using BVI Structures
Harneys
Companies incorporated in the BVI are, by most measures, the most popular offshore holding structure in the world
Panama Corporation – Company Incorporation
Genshape Management Limited
Panama Corporations have been recognised across the world as successful offshore vehicles.
Seychelles Introduces A New International Business Companies (IBC) Regime
Appleby
Fundamental changes to the IBC regime in Seychelles are imminent with the enactment of the new IBC Act 2016 (New Act).
The Law On Wills In The British Virgin Islands
O'Neal Webster
This summary guide provides general commentary and direction to prospective purchasers of BVI property on the law relating to Wills in the BVI.
How To Decide Where To Incorporate Your Offshore Company?
Genshape Management Limited
The choice among numerous offshore jurisdictions can be complicated. A lot of parameters should be taken into consideration. Each offshore financial centre carries its own set of advantages, benefits and possible trade off
FREE News Alerts
Sign Up for our free News Alerts - All the latest articles on your chosen topics condensed into a free bi-weekly email.
Register For News Alerts
Article Tags
Jersey Wealth Management Offshore Financial Centres Wealth & Asset Management
Related Articles
The Use Of Jersey And Guernsey Trusts For Asset Protection - Q&A Walkers
Citywealth 60 Second Interview Appleby
Mitigating The Risk Of Trust Assets Being Treated As A Resource During Divorce: Practical Pointers In Drafting And Administering Trusts Ogier
How To Make Sure Your Family Business Survives The Transition Between Generations Ocorian
Should I Stay Or Should I Go? The Classic Clash Over Trustee Removal And Replacement Walkers
Comparative Guides
Alternative Investment Funds
Mondaq Advice Centres
Global
Investment Immigration
Global
Trademarks in SAARC Countries
More MACs
Upcoming Events
Mondaq Social Media