The Ministry of Economy Decree dated December 12th 2014, effective from February 24th , has modified the list of countries and territories with a privileged tax regimen, excluding the Republic of San Marino. Under this exclusion, exchanges made with this country have no more to be listed in the periodical "Blacklist" communication.

Following the enforcement of the Law 88/2013 that ratified the Tax Agreement against double taxation between Italy and the Republic of San Marino, lawful starting from October 3rd 2013, and considering the massive modifications made to the tax discipline of San Marino, the Italian Government has decided to exclude this country from the list of countries with a privileged taxation.

Article 1 of the Ministry Decree mentioned above has therefore modified the Ministry of Economy Decree dated May 4th 1999, erasing San Marino from the list.

Under the effect of this modification, exchanges made with Sammarinese operators have no more to be included in the communication introduced by article 1 of the Law Decree nr. 40/2010.

The exclusion of the Republic of San Marino from the "black-list" set by the MD May 4th 1999, explicates its effects also the presumption of residence set by article 2, paragraph 2-bis, of the Italian General Tax Law (TUIR).

The exclusion of San Marino from the black listed countries does not produce any effect for the compulsory communication of purchases of goods from San Marino's suppliers. This fulfilment has therefore to be achieved filing the section "SE" of the form "Comunicazione Polivalente" foreseen by article 21 of the Law Decree nr. 78/2010 (as modified by article 2, paragraph 6 of the Law Decree 16/2012).

Article 1 of the Law Decree 40/2010, has made mandatory to communicate to the Italian Tax Agency those exchanges, exceeding the amount of Euro 500,00, incurred with economic operators, having their place of business, residence or domicile within a country included in the so called "black-list", that is within countries and territories included in the 2 lists set by the Ministry of Economy Decree dated May 4th 1999 and November 21st 2001.

As clarified by the Ministry Message nr. 53/E/2010, the communication becomes mandatory if the economic operator has its place of business, residence or domicile in one of the 2 lists. In example, the Italian VAT subject that supply goods or services to a customer placed in a country included in the first list, but not included in the second list, has, in any case, to file and submit the communication. And this despite of the legal entity or business the purchaser has in that country, as clarified by the Ministry Message 53/E/2010. 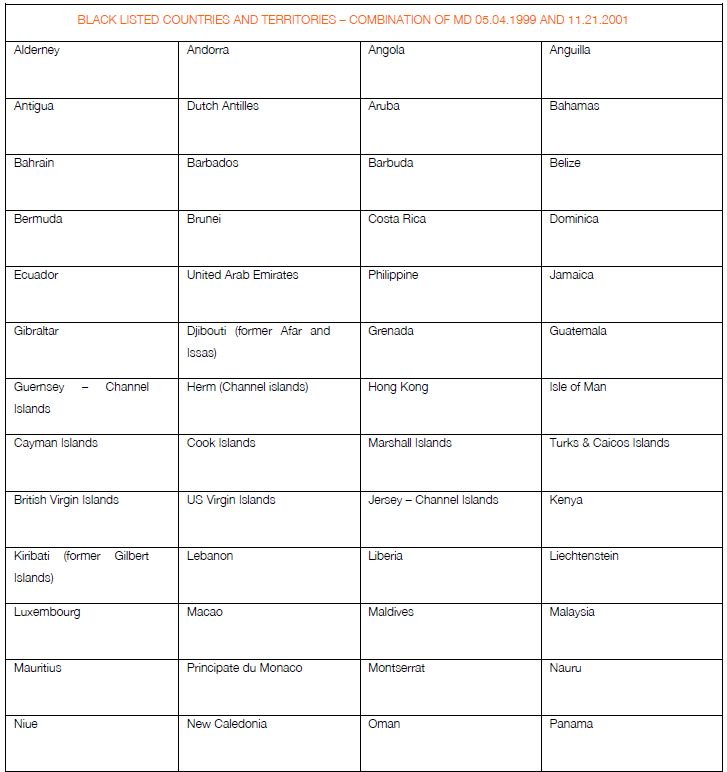 The Ministry Decree has been enforced on February 24th 2014, that the day of its publication on the Official Gazette nr. 45/2014.

Without a specific measure stating the exact day from which exchanges with San Marino have no more to be included in the black-list communication, we deem that all exchanges made within February 23rd 2014 have to be communicated to the Italian Tax Agency. We hope for an additional clarification on this topic by the Italian Tax Administration.

4. TRANSFER OF RESIDENCE INTO A TAX HAVEN

Under article 2, paragraph 2-bis, of the Italian General Tax Law (TUIR), Italian citizens cancelled from the civil registry of the resident population and transferred to a country with a privileged taxation as per the Ministry Decree dated May 4th 1999, are considered as resident in Italy saved any different proof.

The transfer of residence abroad for a period exceeding 12 months, implies the compulsory registration in the Civil Register of Residents Abroad (AIRE).

The proof of the effective transfer of his residence abroad is tipped over the tax payer, who must be able to demonstrate, with material proofs, the effective and permanent transfer of his residence in the foreign country. The tax payer has therefore to demonstrate the non-existence in Italy of a habitual adobe and relationships pertaining his businesses, economic interests, family, social and ethics. To this extent we can refer to the following elements:

Under the effect of the exclusion of San Marino from the list of the Ministry Decree May 4th 1999, Italian citizens registered at AIRE and resident in San Marino, are no more required to demonstrate that they are not Italian resident.

HOW WE CAN HELP

Our professionals are available to give any additional information you may need, so, in case, do not hesitate to contact us.