In this article I will summarise the effects of the new Irish Companies Act 2014 (CA 2014) on the types of corporate transaction that we come across regularly in day-to-day practice.

The fundamental principle evident in CA 2014 is that it has sought to clarify issues that have arisen when implementing corporate transactions under the existing legislation. This simplification was timely and will allow corporate reorganisations, restructurings and transformations to take place on a more solid legal (and accounting) basis.

We will see in the article that although CA 2014 has the effect of simplifying processes, there is also by implication an increase in the risks and obligations for directors as a result of the changes.

The various reserves that Irish companies were required to maintain was becoming cumbersome, and this is acknowledged by CA 2014.

We now have the new concept of "company capital", which is:

As we will see in more detail below, there will be greater fluidity and ability for companies to move between different elements of share capital. This contrasts with the existing situation where, for example, any proposed reduction of the share premium account by companies requires an application to the High Court for the purposes of s62 CA 1963.

CA 2014 also helpfully clarifies what "paid-up share capital" is: a share will be taken as paid up in cash where consideration for allotment is paid by:

Companies will now have rights (some of which they had under the existing legislation) to issue shares of different nominal values, in different currencies or with different amounts payable on them. The ability of companies to issue redeemable shares (unless their constitution provides otherwise) is retained, with the added benefit that the current obligation on companies to retain 10% of the share capital as non-redeemable is removed.

There is no requirement for a company to have an authorised share capital, so the new single-document constitution can simply state the class of shares and their nominal (par) value, without setting a cap on the amount of shares that can be issued.

The status quo largely prevails here: shares may be paid for in money or money's worth (including goodwill and expertise). The main changes of relevance are that:

Section 71(5) of CA 2014 repeats the existing law that anything received on the allotment of shares in excess of their nominal value is undenominated share capital and should be transferred to the share premium account.

CA 2014 seeks to take the proactive step of dealing with certain transaction structures, and the merger relief provisions are an example of a positive change.

Take a standard share-for-share deal structure as set out below, where Acquirer Co. buys the shares in Target Co. (worth €1m) in return for the allotment of 1,000 shares in Acquirer Co. to the value of €1 each:

Under the existing legislation Acquirer Co. would have been required to accrue share premium of €999,000 in respect of the above allotment, but the merger relief provisions now provide that no such accrual needs to occur, subject to compliance with certain conditions (which are very much akin to the relief conditions in the Stamp Duties Consolidation Act 1999), with at least 90% of the share capital needing to be aquired and the consideration being satisfied by the allotment of shares in Acquirer Co.

The same principles applying to give merger relief above also apply to group reconstructions. In the structure below, Sub. 1 is transferring an asset (with a book value of €100,000 and a market value of €1m) to Sub. 2 in return for the allotment of 100 shares by Sub. 2 to Top Co.: 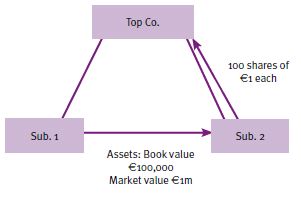 So in our above example, Sub. 2's undenominated capital will be €99,900 in respect of the allotment of shares to Top Co.

This issue had exercised legal minds for quite some time, with differing points of view pertaining. It generally comes up where a company distributes a non-cash asset, such as part of its business or undertaking (for example, intellectual property), where it does not receive any consideration (such as when making a distribution) or receives only minimal consideration. The question arises of what value to attribute to the transferring assets: book or market value.

As the Company Law Review Group (CLRG) noted in its Second Report, it is not unusual for there to be bona fide reconstructions of companies whereby a company's undertaking or part of an undertaking or a subsidiary is transferred or hived off into a new company, with the consideration for such transfer being the issue of new shares in the new company to the shareholders of the transferring entity.

This is a standard pre-transaction structure: 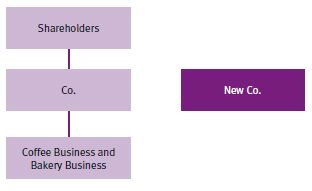 It is decided to transfer the Bakery Business to New Co., with the consideration being satisfied by the allotment of shares in New Co. to the shareholders of Transferring Co.: 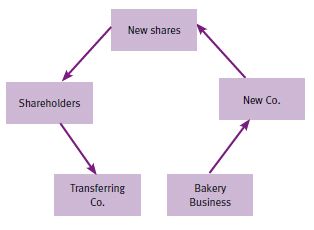 After this transaction the Bakery Business and the Coffee Business are still held by the shareholders, albeit through different companies: 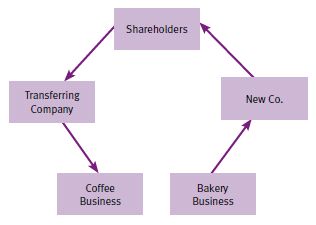 This transaction structure is perfectly standard and allows the splitting of enterprises in a way with which the taxation legislation accords, in that if New Co. were incorporated with the specific purpose of buying the Bakery Business, relief under s80 of the Stamp Duties Consolidation Act 1999 should be available. TCA 1997 also deals comprehensively with such transactions. From the company law perspective, the difficulty was that a transferring company in entering into the above transaction would be "giving away" an asset (the Bakery Business), with its shareholders receiving the consideration. Aside from the corporate capacity and corporate benefit issues that would need to be dealt with, the "giving away" of the asset meant that the prudent course for Transferring Co. was to write down its distributable reserves by such amount as equals at least the book value of the Bakery Business. As mentioned above under hive-outs, there had been continuing debate on whether the market value was more appropriate to use when applying the value to the reserves.

It is welcomed that CA 2014 has followed the Second Report of the CLRG and permits companies to enter into transactions such as above. It specifically provides for a scenario where an undertaking or part of an undertaking or a subsidiary is transferred to a new company that in turn issues shares as consideration to the shareholders rather than to the transferring company itself. The transaction is referred to as a "variation of capital" and can now be blessed using the summary approval procedure (SAP) set out below. As part of the SAP, the shareholders may resolve for the reduction to be applied to the reserves, which, given the provisions adopted in the CA 2014, should most likely be the book value.

Any reduction of share capital for limited companies under existing legislation requires an application to the High Court. Now, under CA 2014, a company can reduce its share capital "in any way it thinks expedient", which is effected by way of the SAP. This is a very significant change for Irish-incorporated companies. It is important to note that the court process is still available. The SAP declaration required of the directors regarding any proposed reduction of share capital is quite extensive, with a report of an independent person also being required (see Table 1 below). It will be interesting to see whether directors will defer to the court process rather than take on the risk (to include personal liability) of the SAP.

The EU Merger Regulation, which has permitted cross-border mergers of private limited companies for around the last six years, has worked quite well, and CA 2014 now provides for the domestic merger of Irish-incorporated private limited companies. This means that under CA 2014 it will be possible to effect these mergers without a court order by using the SAP or deferring to the court process, which is also available.

The merger can take place in three ways:

This will be a very valuable addition for clients with complex group structures or with subsidiaries that have outlived their corporate purpose.

This process is very much based on the existing financial assistance "whitewash" procedure. It is a radical change and will greatly simplify certain corporate actions that had required court involvement or were taking place in a legislative vacuum. However, it will possibly increase the risk for directors in respect of their obligations when taking part in a summary approval procedure.

The shareholder approval required is either 75% by way of a resolution at an extraordinary general meeting or 100% by way of a shareholders' written resolution. A statutory declaration sworn by the directors is required in respect of each "restricted activity" – note that the statutory declaration is different in respect of certain restricted activities (see Table 1 below) An independent person's report is required for certain restricted activities (see Table 1), although this requirement has now been removed in respect of s31 (loans to directors), where its existence had been a significant impediment to the use of that "whitewash" process. An independent person is a person who is qualified to be appointed as the statutory auditor of the company.

The declaration must be lodged with the Companies Registration Office within 21 days.

Aside from the transactions referred to above, the SAP can be used for:

This process is very much based on the existing financial assistance "whitewash" procedure. It is a radical change and will greatly simplify certain corporate actions that had required court involvement or were taking place in a legislative vacuum. However, it will possibly increase the risk for directors in respect of their obligations when taking part in a SAP. 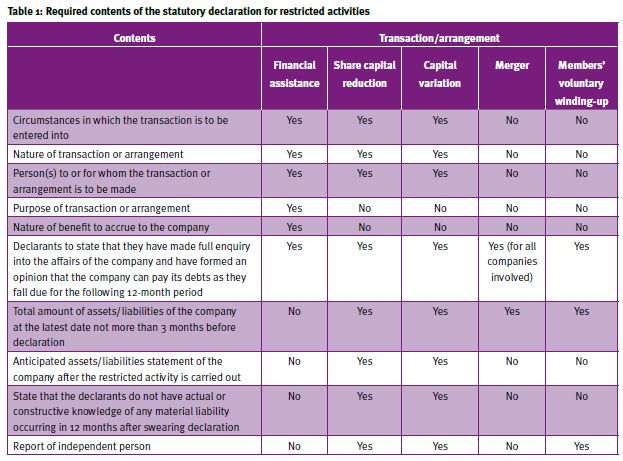 Given the breadth of CA 2014, it is impossible to deal with all of its elements in two articles, but in broad terms, it will greatly assist the carrying out of corporate transactions, transformations and restructurings and will bring certainty to some difficult accounting and legal issues.

Although there is always media focus on our corporate tax regime as the incentive for all foreign investment projects, it is worthwhile to note that a stable and clear corporate law regime is a factor that companies consider when making their decisions to locate here, so CA 2014 can only be an assistance in that regard.

The summary approval procedure although undoubtedly of benefit, will expose directors to greater obligations and risks. However, the reports of the independent person should be easier to obtain, given that they are required to state only that the statements of the directors in the declaration are "not unreasonable". It is also submitted that the tax legislation needs to be updated to ensure consistency with the new companies legislation, which it had not done, for example, in the case of the EU Merger Regulations.