The Companies Act 2014 was signed into law on 23 December 2014 and will come into effect on 1 June 2015. The Act will consolidate the various existing Companies Acts, simplify company law generally and introduce a number of new provisions. The Act does not alter the essential nature of an Irish company which has separate legal personality and a board of directors responsible for the management of a company. The Act affects all Irish companies, however the extent to which the Act will impact investment companies and management companies of UCITS or alternative investment funds (AIFs) is different. Investment companies and managers of both UCITS and AIFs need to consider how the Act impacts them, what changes need to be made to their existing corporate structures and when any changes need to be made.

In addition to Part 24 of the Act, the following sections of the Act also apply to investment companies:

There are a number of reasons why investment companies might look to update their M&As in order to align themselves with the new regime. For example:

If an investment company chooses to amend its M&A to address the above issues it can do so in one of two ways. It can carry out a line-by-line review of the M&A so as to update the existing M&A while retaining any existing bespoke provisions. The other option is to adopt a "standard" M&A. The majority of investment companies are likely to do a full review of their M&A. It will be for the directors of each investment company to determine which option is most appropriate to them and to put such option to shareholders for approval.

In terms of timing, it will not be possible to amend the M&A until after the commencement of the Act on 1 June 2015. In our experience, investment companies are unlikely to look to hold EGMs specifically for the purpose of amending their M&As and for efficiency reasons will look to consider such matters at their 2016 AGM. Any new M&A will require approval by way of a special resolution of the shareholders (i.e. approval by a majority of at least 75% of votes cast in person or by proxy at a general meeting).

The key distinguishing features of an LTD are that it will have a single constitutional document which does not have an objects clause and will have full and unlimited capacity. The key differences as regards a DAC (other than its name) are that its constitution will be a two-part document (its M&A), which will include an objects clause. Other differences between an LTD and a DAC are generally optional. For example, while an LTD may have just one director, it is permitted to have more than one director if it prefers.

DACs limited by shares will have the following key features:

PRINCIPAL DIFFERENCES BETWEEN DACS AND LTDS

The main differences between the two forms of private limited company are set out below. 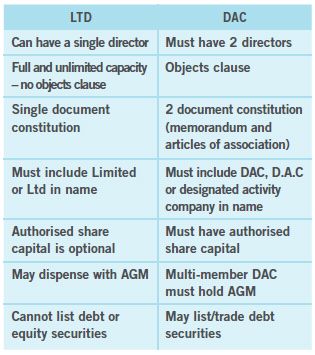 CONVERSION TO A DAC OR LTD?

Whether a private limited company is to convert to a DAC or an LTD, there are three options in terms of the changes that it can make to its M&A:

The first option is the simplest on paper but the same issues identified in respect of an investment company will apply in this case too in that the company's constitution would include references to the old Companies Acts which will require users to refer back to the old Acts and may result in additional ambiguity or conflict. The second option is likely to be the most appropriate option, unless a company is particularly wedded to its existing articles. The last option will be the most appropriate choice where the company's M&A is bespoke and it is considered important to retain all the existing provisions but it will be the most expensive option. It will be a matter for the directors and shareholders to decide which option it will adopt.

TIMING OF ACTION TO BE TAKEN

The Act provides a transitional period of eighteen months within which to re-register as an LTD. If a company is to re-register as a DAC, this must be done within the first fifteen months. Ideally the re-registration should be approved by the shareholders (a special resolution is required to re-register as an LTD or an ordinary resolution to re-register as a DAC). If the shareholders do not act, the directors will be under an obligation to take certain steps. Any private company limited by shares which, at the end of the 18-month transition period, has not re-registered as some type of company recognised under the Act will automatically convert to LTD status. However this is not recommended for a number of reasons, including that the directors would be in breach of their obligation to act. It is therefore important that management companies consider which of the two options, DAC or LTD, is the most appropriate for them.

DAC LAW TO BE DEFAULT LAW DURING TRANSITION PERIOD

CHANGES IN THE ACT APPLICABLE TO ALL COMPANIES

Several changes provided for in the Act apply to all companies and so are relevant to both investment companies and fund management companies. The Act codifies the directors' duties established under common law. These include the following principal fiduciary duties:

Other notable new features of the Act are that certain individuals, not directors, may have the authority to bind the company. The company law offences are categorised into four tiers, with category 1 offences being the most serious. New rules in relation to registration and priority of charges will also apply.

The action to be taken by a company will depend on its current form: investment company or private limited company. Investment companies and fund management companies need to consider the way in which their constitutional documents should be amended to reflect the new requirements of the Act. Fund management companies should consider whether to re-register either as an LTD (within the 18 months following 1 June 2015) or as a DAC (within 15 months following 1 June 2015). If such a company has not re-registered as some type of company under the Act by the end of the transition period, it will automatically convert to an LTD, which is not recommended.