by Shaily Gupta
Vaish Associates Advocates
0 Liked this Article
To print this article, all you need is to be registered or login on Mondaq.com.

'Digital Economy' is based on digital computing technologies. It constitutes of various evolving business models such as e-commerce, online advertising, app stores, online payments modes and social media. India is one of the fastest growing e-commerce markets in the world, home to some of the giant players such as Flipkart, Paytm, Amazon, etc. What makes it successful? - advanced, evolving, inexpensive and accessible connectivity and technology solutions, which are the main enablers for the global success of this industry and increasing popularity of digital economy, challenging international physical borders and outpacing the principles of traditional economy.

Consider an e-commerce giant, headquartered abroad and operating e-commerce websites across countries, including India. In India, the e-commerce company interacts with sellers and consumers digitally, over e-mails, website and other digital means, without maintaining any physical presence in India.

An Indian trader enters into an agreement with the Company for advertising his products, as a measure to boost sales. In view of the provisions of the domestic tax laws and tax treaties, the advertisement and sales facilitation revenue earned by the foreign e-commerce company may not be subject to tax in India, as it does not have any physical presence in India, thus resulting in a loss of tax revenue for the Indian government.

Now, contemplate, that the foreign e-commerce company routes its transactions through a low-tax jurisdiction, i.e. where the corporate tax rate is low or nil, as compared to other jurisdictions. This may lead to double non-taxation, as income is neither taxable in the source country, nor in the country of residence.

Therefore, it is apparent that where the existing global tax policies, essentially crafted for the traditional economy, are applied to the digital economy, it may lead to non-taxation of income, due to base shifting and jurisdictional arbitrage or in simple words profit shifting.

In view of the increasing role of digital economy globally, a paradigm shift in the international tax policies was the need of the hour. This would bring equilibrium on the tax front and empower nations to collect their legitimate share of taxes. 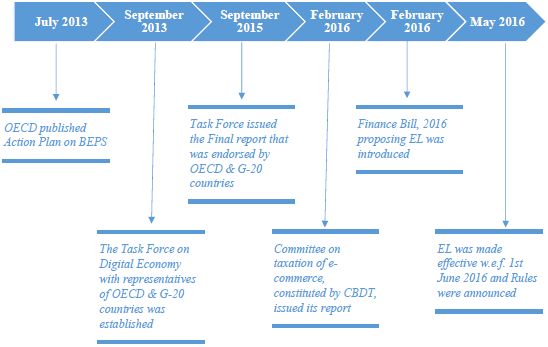 4. Developments in India – Some judicial precedents

The Indian tax authorities have been grappling to tax the income of companies engaged in provision of digital advertising space for online advertisement much before the OECD and G-20 members joined hands to find ways and means to tackle the issue of income going untaxed in such cases.

In the year 2011, the Mumbai Bench of the Tribunal in the case of Yahoo India (P) Ltd vs DCIT: 140 TTJ 195 held the payment made by assessee to Yahoo Holdings Hong Kong Ltd ('YHHL'), for the services rendered for uploading and display of banner advertisement of the Department of Tourism of India, on its portal, was not in the nature of royalty as defined in the Indian Income tax Act. The Tribunal held the consideration received by YHHL to be in the nature of business profit and in the absence of any PE of YHHL in India, it was held to be not chargeable to tax in India.

Likewise, in ITO vs Pubmatic India (P) Ltd: 60 SOT 54, the Mumbai Bench of the Tribunal held remittance made to a US company towards purchase of advertisement space fell under Article 7 of India-USA DTAA and in absence of a PE of such company in India, income was not taxable in India.

Placing reliance on Mumbai Tribunal's order in case of Yahoo India and Pinstorm Technologies (supra), the Tribunal held that payments made for online advertisement was not in the nature of 'royalty' both under the Income tax Act and the relevant Double Tax Avoidance Treaty. Relying on OECD Commentary, the Tribunal further observed that a search engine which only has presence by way of a website cannot be held as PE unless its servers are located in same jurisdiction. As regards "business connection", the Tribunal held that there is nothing on record to demonstrate or suggest that the online advertising revenues generated in India were supported by/ serviced by/ connected with any entity based in India. It was further held that in absence of human intervention/ element in rendering such advertisement services, the payments made to Google Ireland and Yahoo US could also not be taxed as 'fee for technical services'.

As would be observed, the attempts of the Indian Revenue to bring to tax payments for online advertisers within the ambit of tax by applying the existing provisions of the Indian Income tax Act and the Double Tax Treaty, were not successful before the Tax Tribunals. Similar challenges were faced by other countries as well. A new law or levy approach was thus required to bring such payment to tax.

The OECD, an international economic organization, has sought to address the tax challenges of the Digital Economy in its Action Plan 1 of the Final Report on 'Base Erosion and Profit Shifting' (BEPS). The reason why OECD sought to address these issues was in response to growing concerns raised by political leaders, media outlets and civil society around the world about tax planning by multinational enterprises that makes use of gaps in current tax laws to artificially reduce their tax liabilities.

BEPS Action Plan 1 identifies and analyses various tax models in relation to transactions in the Digital Economy, such as modification to 'Permanent Establishment (PE) related Rules to include significant economic presence, withholding tax on digital transactions and equalisation levy — similar to withholding taxes.

OECD in its Final Report on "Addressing the Tax challenges of the Digital Economy", has stated as under:

302. To avoid some of the difficulties arising from creating new profit attribution rules for purposes of a nexus based on significant economic presence, an "equalisation levy" could be considered as an alternative way to address the broader direct tax challenges of the digital economy. This approach has been used by some countries in order to ensure equal treatment of foreign and domestic suppliers. ........

In light of the aforesaid developments, the Central Board of Direct Tax (CBDT), had constituted a 'Committee for Taxation of E-commerce Transactions' to suggest an appropriate mechanism, for taxation of e-commerce transactions. The Committee, taking into consideration the BEPS Action Plan 1, suggested adoption of a new levy, viz., 'Equalisation Levy', which is independent of the domestic income tax provisions. The equalisation levy was thus introduced through the Finance Act, 2016 and was made applicable w.e.f. 1st June 2016.

CBDT issued Equalisation Levy Rules vide Notification dated 27th May, 2016. A brief snapshot of the Rules, which provides the procedural framework for the compliances to be undertaken and appeal process, is given below:

9. Development in other countries

With the introduction of equalisation levy, India joins the ranks of the below mentioned countries who have introduced taxes on digital transactions.

The introduction of equalisation levy raise various issues, some of which are as follows:

The digital economy is evolving rapidly. It is imperative that international tax policies/ provisions keep pace with these developments in order to ensure that there is no loss of tax revenues as a whole merely because tax laws/ concepts made for brick and mortar economy cannot be applied to the digital economy.

In India, the introduction of Equalisation Levy, in relation to online advertisements is a first step towards taxation of the digital economy. It is expected that in the times to come the scope of such levy will be expanded to include other online / electronic transactions.

However, in order that equalisation levy does not result in increasing the transaction cost for Indian businesses, the Indian Government should evolve a mechanism whereby the non-resident payee of income can avail credit of such levy. Also, it would help businesses if CBDT were to clarify the various issues raised hereinabove in relation to applicability / procedure/ mechanism of levy of equalisation levy.