Covering an area of 3.3 million sq km, India is the seventh largest country in the world, occupying a major portion of the South Asian subcontinent. Extending from the Himalayas in the north, it stretches southwards to the Tropic of Cancer and tapers off into the Indian Ocean between the Bay of Bengal on the east and the Arabian Sea on the west.

India's climate varies significantly from the permanently snow-capped Himalayas in the north to the tropical south. In spite of much of the north of India lying beyond the tropical zone, the entire country has a tropical climate marked by relatively high temperatures and dry winters. There are four seasons in India: winter (December–February), summer (March–June), south-west monsoons (June–September), and the post-monsoon season (October–November).

India is a sovereign, socialist, secular, and democratic republic with a parliamentary system of government. It is governed by the Constitution of India, which came into force on 26 January, 1950. It has a federal government with 29 states and seven union territories, and is the largest democracy in the world. The central/union government is further divided at the state and local levels. The government is divided into three structural segments: the executive, the legislature, and the judiciary.

Legislature: The Parliament is the supreme legislative body of India. It consists of the President and the two Houses— Rajya Sabha (Council of States) and Lok Sabha (House of the People). Elections to the Lok Sabha are held every five years, after which the Prime Minister is appointed by the President.

Judiciary: The Supreme Court is the apex body of the Indian legal system, followed by the High Courts and subordinate courts. The judiciary is independent of the executive, and legislative branches of the government.

The current ruling coalition is the National Democratic Alliance (NDA), which is an alliance of over 30 parties led by the Bharatiya Janata Party (BJP). The former ruling alliance, the United Progressive Alliance, was led by the Indian National Congress. Other major political parties in India include the Nationalist Congress Party, Bahujan Samaj Party, Communist Party of India, and the Communist Party of India (Marxist).

India has one of the oldest legal systems in the world. The Constitution of India is the supreme law of the country; it gives due recognition to statutes, case laws and customary laws consistent with its dispensations. There is also a vast body of laws known as subordinate legislations in the form of rules, regulations, and bylaws made by the central and state governments and local authorities.

The Constitution has generally provided for a single integrated system of courts to administer both union and state laws. As mentioned previously, the judiciary is divided into various levels, with the courts forming a strict hierarchy of importance: the Supreme Court of India, High Courts (of respective states/groups of states), District Courts, followed by other subordinate courts.

India is currently the second most populous country in the world, with an estimated 1.34 billion people in 20174. With 63% of the population in the age range of 15–59 years and a median age of 26. 7 years in 2015, India has a favorable demographic dividend5. It will soon have the largest and youngest workforce in the world6. 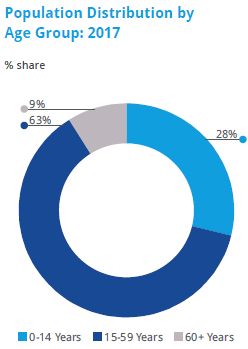 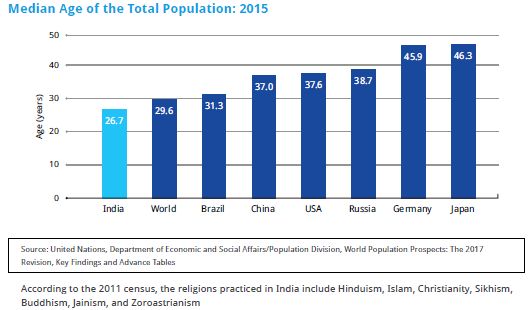 The Constitution of India recognizes 22 different local languages, of which Hindi is used for official communication along with English at a national level. Other Indian languages recognized by the constitution are Assamese, Bengali, Gujarati, Kannada, Kashmiri, Konkani, Malayalam, Manipuri, Marathi, Nepali, Oriya, Punjabi, Sanskrit, Sindhi, Tamil, Telugu, and Urdu. However, according to the 2001 census, about 30 languages are spoken by more than a million native speakers, and 122 are spoken by more than 10,000 speakers. According to the 2011 census, literacy rates stand at 74.04% (82.14% for males and 65.46% for females).

The currency of India is the Rupee (ISO code: INR; symbol: `). The Reserve Bank of India, which is the central bank of the country, has the sole authority to issue banknotes and coins.

Typically, a work day is 8 hours long extending, from 9am to 5pm IST (GMT + 05:30), and working days vary between 5 to 6 days a week. Business hours vary from 8 to 10 hours a day, depending on the type of organization, i.e. government, private company, multinational corporation, etc.

In addition, there are about 14 gazetted vacation days and 31 restricted holidays in the official calendar. These public vacation days are set by every state government each year under the Negotiable Instruments Act–1881.

India is among the fastest growing economies in the world. It is the third largest economy in terms of gross domestic product (GDP) based on purchasing power parity (PPP) and the sixth largest by nominal GDP The service sector has been driving economic growth in India, accounting for 61.5% of Gross Value Added (GVA) growth (at constant prices), followed by the industry sector with a 23.1% share, and agriculture accounting for 15.4%.9 However, agriculture still has the largest share in employment (over 45% of the total workforce), followed by services (approximately 32%10).

Many new initiatives have been taken up by the government to facilitate investment and ease of doing business in the country. Noteworthy among them are initiatives such as Make-in-India, Invest India, StartUp India and e-biz Mission Mode Project under the National e-Governance Plan.11

The current business-friendly government's policies are expected to boost foreign investments further as it aims to:

India's economy has grown at a strong pace in recent years owing to the implementation of critical structural reforms, favorable terms of trade, and lower external vulnerabilities. Beyond the challenges faced in November 2016 due to demonetization, currency exchange initiative and policy actions should focus on reducing labor and product market rigidities to ease firm entry and exit, expand the manufacturing base, and gainfully employ the abundant pool of labor.13

Foreign direct investment: According to UNCTAD's 2015 survey of investment promotion agencies, India is one of the top three prospective destinations for FDI for 2015–2017, following China and USA19.

From April 2000 to December 2017, cumulative FDI equity inflows from Mauritius stood at USD 125 billion, making it the largest source of FDI into India. During April-December 2017, Mauritius was also the top investor with USD 13.3 billion, followed by Singapore, Japan, Netherlands, the USA, the UK, Germany, UAE, France, and Cyprus 21. 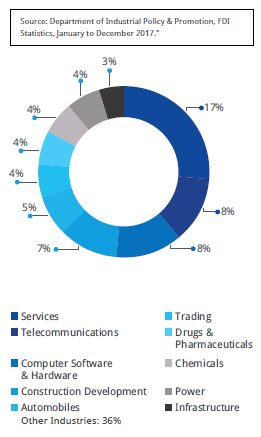 Considering sector-wise inflows, services attracted the highest amount of FDI in India and accounted for 17% of the total inflows during April 2000–March 2017. In 2017–18, telecommunications received the highest amount of FDI equity inflows followed by, computer software and hardware, the services sector, trading, automobiles, metallurgical industries, chemicals, power, drugs and pharmaceuticals, and construction development. 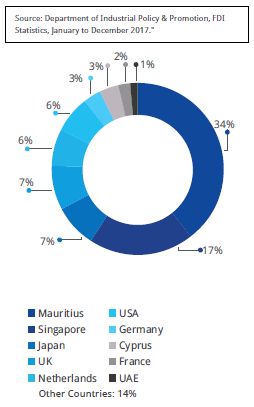 Foreign Portfolio Investments (equity and debt) amounted to USD 21.66 billion in 2017–18 as compared to USD 7.6 billion in the previous financial year.22

For FDI regulations in India, please see the FDI section in Chapter 2.

ARTICLE TAGS
India Corporate/Commercial Law Corporate and Company Law Strategy Industry Updates & Analysis
POPULAR ARTICLES ON: Strategy from India
Virtual Courts In India
Khaitan & Co
The COVID-19 pandemic has disrupted the justice delivery system like never before. The compulsions associated with ‘social distancing' coupled with lockdown directives have led courts and tribunals to shut their premises to the public.
Right to Strike Under Industrial Dispute Act, 1947
Paul & Associate
Every right comes with its own duties. Most powerful rights have more duties attached to them. Today, in each country of globe whether it is democratic, capitalist, socialist, give right to strike to the workers. But this right must be the weapon of last resort because if this right is misused, it will create a problem in the production and financial profit of the industry.
Legal Due Diligence
M. Kumar & Associates
New Process To Purchase Stamp Paper In Maharashtra
Mansukhlal Hiralal & Company
Maharashtra Government has very recently revised the process of buying a stamp paper.
Semiconductor Integrated Circuits Layout Design In Indian IP Regime
Dubey & Partners - Advocates
In today’s dynamic and competitive environment, IP rights are key elements needed to maintain an edge in the market. It is crucial that the companies understand that what can be protected and how within their respective countries.
10 Key Takeaways From INR 20 Lakh Crore Economic Relief Package
HSA Advocates
Under the scheme banks will be allowed to invest, through both primary and secondary market transactions.
FREE News Alerts
Sign Up for our free News Alerts - All the latest articles on your chosen topics condensed into a free bi-weekly email.
Register For News Alerts
Article Tags
India Corporate/Commercial Law Corporate and Company Law Strategy Industry Updates & Analysis
Similar Articles
Powered by mondaq AI
MATCH
68%
Doing Business In India SP Chopra & Co
Related Articles
An Economic Boost To Trigger A Self-reliant Nation Nexdigm Private Limited
Capital Market – Persevere Rajani Associates
10 Key Takeaways From INR 20 Lakh Crore Economic Relief Package HSA Advocates
Highlights Of The Structural Reforms To The Energy And Infrastructure Sector Under The Atmanirbhar Bharat Abhiyan IndusLaw
Virtual Courts In India Khaitan & Co
Mondaq Webinars
Using Your Professional Services Firm’s Largest Source of Market Intelligence: Your Website’s Analytics
Magnifirm
Webinar Sydney Australia
COVID-19 Restart Series: Managing the Return to Work in the Midst of the COVID-19 Pandemic: What Canadian Employers Need to Know
Gardiner Roberts LLP
Webinar Toronto Canada
More Webinars
Comparative Guides
Alternative Investment Funds
Blockchain
Cartels
Cybersecurity
Enforcement of Foreign Judgments
Mondaq Advice Centres
India
Trademarks
India
Insolvency
India
Arbitration, Litigation and Conciliation
Global
Investment Immigration
Global
Trademarks in SAARC Countries
More MACs
Upcoming Events
Mondaq Social Media