Rewriting the Companies Ordinance (CO), Hong Kong's primary corporate statute, was no doubt a long and arduous process. The work, which was started back in 2006, eventually began to bear fruit when the Companies Bill was finally passed by the Legislative Council on 12 July 2012 and gazetted on 10 August 2012, following at least five rounds of public consultation.

There were discussions on almost all aspects of the original CO during the rewriting process. Two of the more eye-catching conclusions of relevance to corporate finance practitioners are the replacement of the headcount test and the abolition of par values for shares.

REPLACEMENT OF THE HEADCOUNT TEST

Following the 2009 PCCW case, the question of whether the headcount test should be abolished was much debated, with a number of diverse views being expressed. After numerous discussions, the new CO has finally settled the issue by introducing new provisions. For specified privatisation and takeover schemes, the headcount test is to be replaced with a new requirement: the number of votes cast against the resolution to approve a scheme of arrangement must not be more than 10% of the votes attached to all disinterested shares (disinterested shares test). The new requirement is aligned with the 10% objection rule in the Takeovers Code1. Accordingly, such schemes are subject to the share value test and disinterested shares test. For requirements of other scheme categories, please refer to the table below.

ABOLITION OF PAR VALUES FOR SHARES

In a public consultation commissioned by the Financial Services and the Treasury Bureau in 2003, a significant proportion of respondents commented that par value had caused various practical problems. The Standing Committee on Company Law Reform, which concurred with the views of the majority of respondents from the 2003 consultation, recommended the adoption of a mandatory no-par regime for companies. From then onwards, the issue became a hot subject for discussion. Further consultations were conducted in 2008 and 2009 respectively. In both consultations, the majority of respondents supported the mandatory no-par proposal. The new CO has finally settled this issue by introducing new provisions to adopt a mandatory no-par regime for companies. For more details, please refer to the table below.

The major purposes of the new CO are to enhance corporate governance, ensure better regulations, facilitate business and modernise the law. The new CO consists of 921 sections and 11 schedules. In order to facilitate implementation of the new CO, more than ten regulations will have to be legislated in 2013-14. The new CO is expected to take effect in 2014.

There are many new initiatives contained in the new CO. For discussion purposes, we have selected some of the more relevant and interesting ones, and an overview of these provisions (not an exhaustive list) is presented in the following table. 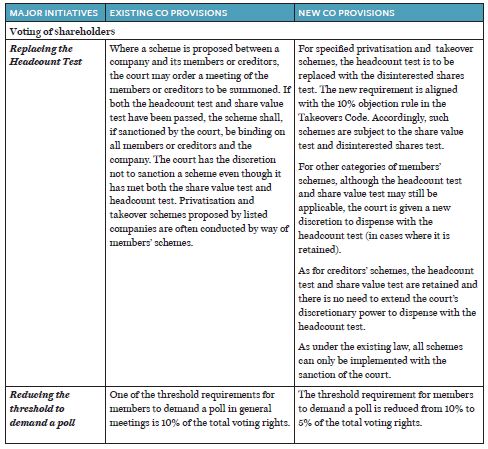 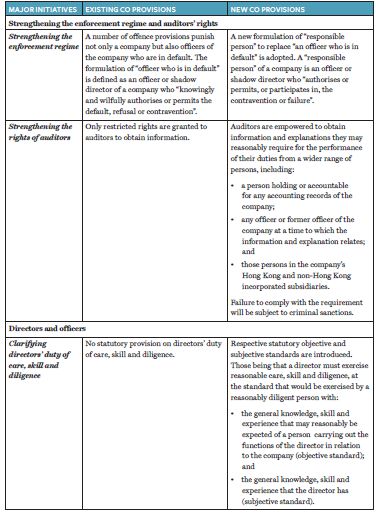 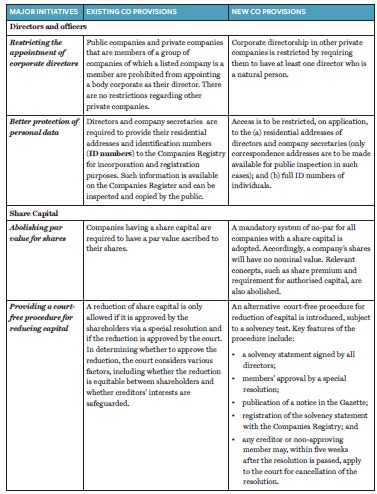 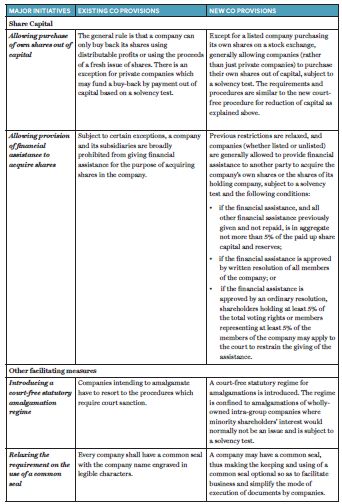 As mentioned above, more than ten regulations in relation to the new CO will have to be legislated in the future. We will closely monitor the latest developments of the new CO and its related regulations from time to time and will issue updates as and when appropriate. In the meantime, please do not hesitate to contact us if you require any advice or further information.

A summary of the other major initiatives contained in the new CO can be downloaded via the link below:

You may also download copies of the new CO via the link below: