Following public consultation in March 2014, the Financial Services and the Treasury Bureau (FSTB) has now published the "Consultation Conclusions on Open-ended Fund Companies", and the related Securities and Futures (Amendment) Bill 2016 (Amendment Bill) was gazetted on 15 January 2016.

Currently, an open-ended investment fund may only be established in Hong Kong in the form of a unit trust but not in corporate form (mainly due to various restrictions on capital reduction under the Companies Ordinance (Cap. 622) (CO)). Pursuant to the Amendment Bill, there will be a choice to allow such fund be set out in the form of a company. It is hoped that with the extra option for fund structure, more funds (whether public or private) will choose to domicile in Hong Kong, which will in turn deepen and broaden Hong Kong's asset management industry.

An open-ended fund company (OFC) is an open-ended collective investment scheme, which is structured in corporate form with limited liability and variable share capital.

Similar to a conventional company incorporated under the CO, an OFC will have the following characteristics:

On the other hand, being an investment vehicle, an OFC will have the following additional characteristics:

Roles of SFC and the Registrar of Companies

The Registrar of Companies (CR) will be responsible for the incorporation and administration of statutory corporate filings of OFCs. The CR will keep records of information relating to OFCs and provide the public with services to access the OFC information that it holds.

Major Provisions of the Amendment Bill

The Amendment Bill provides for the broad structure of OFCs in Hong Kong, leaving the more detailed provisions on the creation of, the carrying on of collective investments by, and regulation of, the OFCs in the rules and codes/guidelines to be made by the SFC after further public consultation.

The Amendment Bill consists of 10 divisions as follows: 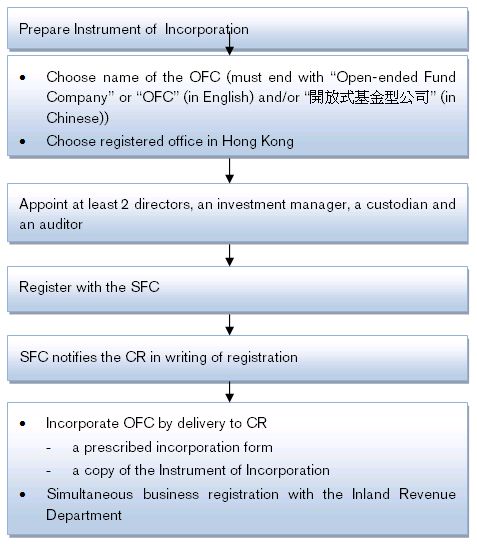 The Amendment Bill provides that it is a criminal offence for a person to carry on business as an OFC or hold out as an OFC without registration with the SFC. A person who, without reasonable excuse, contravenes this provision will, on conviction on indictment, be liable to a fine of HK$5 million and to imprisonment for 7 years.

The incorporation procedure for privately offered and publicly offered OFCs is the same under the Amendment Bill. It was envisaged in the initial Consultation Paper that if the shares of an OFC is to be offered to the public, it must seek separate SFC's authorization under section 104 of the SFO which would be processed concurrently with its application for registration as an OFC.

Qualifications of persons managing an OFC and its assets

Supervision by the SFC

(a)    the carrying on of collective investments by means of OFCs; and

The OFC Rules may:

(ii)    provide that the offence is punishable by a fine, imprisonment or both (subject to limits set out in the Amendment Bill).

The SFC is also empowered to make codes or guidelines to provide guidance relating to incorporation, registration, management, operation and business of the OFCs. While such codes or guidelines are not subsidiary legislation, they are admissible in evidence, and could be taken into account in determining a question arising in, any court proceedings.

(a)    a direction to OFC or its investment manager that the company is to cease to issue or redeem shares (or any class of shares) in the OFC; and

(b)    a direction to a director of the OFC that the director is to cease to transfer shares (or any class of shares) in the OFC to or from, or to and from, the director's own holding of shares,

if it appears to SFC that:

(i)     any of the registration requirements for the OFC is no longer met;

(ii)    any of the OFC, its director, investment manager, custodian or sub-custodian has contravened any of the provisions of the Amendment Bill, any notice/requirement given or made by the SFC or any condition imposed on registration of the OFC;

(iii)   any of the persons in (ii) above has, in purported compliance with any of the provisions of the Amendment Bill, any notice/requirement given or made by the SFC or any condition imposed on registration of the OFC, knowingly or recklessly provided to the SFC any information that is false or misleading in a material particular;

(iv)   an investment manager of the OFC has contravened any of the terms and conditions of its licence or registration under the SFO, or in purported compliance with any such terms and conditions, knowingly or recklessly provided to the SFC any information that is false or misleading in a material particular; or

(v)    it is desirable to do so in order to protect the interest of the investing public.

Cancellation of registration and winding up

(a)    must, as soon as reasonably practicable notify the CR in writing of the cancellation; and

While SFC's approval is required for the streamlined termination of registration described above, its approval is not required in the case of a winding up of an OFC. It is anticipated the winding up rules to be devised in the OFC Rules will follow closely those applicable to conventional companies in the Companies (Winding Up and Miscellaneous Provisions) Ordinance.

The Amendment Bill makes it a criminal offence for an OFC (and every person who is knowingly a party to) carrying on its business:

(b)    for any fraudulent purpose.

A person who commits an offence of fraudulent trading is liable for maximum fine of HK$10 million and imprisonment for 10 years. This provision applies whether or not the OFC has been, or is in the course of being, wound up.

The Amendment Bill will also amend certain other Ordinances including:

(b)    Stamp Duty Ordinance (Cap. 117) – to provide for exemption of stamp duty in respect of allotment or redemption of shares in an OFC; and

(c)    Contracts (Rights of Third Parties) Ordinance (Cap. 623) – to exclude the Instrument of Incorporation of an OFC from the application of that Ordinance.

The Amendment Bill will be introduced into the Legislative Council for first reading on 27 January 2016. The SFC will conduct a separate public consultation on the draft OFC Rules and the OFC Code setting out more detailed operational requirements.

Copies of the Consultation Conclusions and the Amendment Bill can be downloaded via the links below: