Leniency is a form of whistle blowing, where a cartel member discloses to the Hong Kong Competition Commission (the "Commission") the existence of, and information about, a cartel in return for immunity from prosecution. Leniency applications are typically made when a cartel member wishes to exit a cartel, or where the risk of enforcement is imminent. 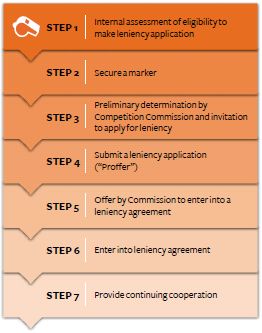 Should You Apply for Leniency?

Leniency allows cartel members a "way out", by offering the Commission information and cooperation in return for the possibility of immunity or lenient treatment for both the undertaking and its officers and employees.

In Hong Kong, only the first leniency applicant will receive full immunity from fines and prosecution. Other cartel members who cooperate with the Commission may, at the discretion of the Commission and Competition Tribunal (the "Tribunal"), benefit from lenient treatment, having regard to the timing, nature, extent and value of cooperation provided.

Leniency often entails an admission of liability by the leniency applicant, and an admission of this kind may form the basis of follow-on litigation for damages by third party claimants. Hence, leniency only protects against enforcement by the Commission, but will not preclude civil proceedings.

If the cartel operates in, or affects markets other than Hong Kong, then a leniency application in Hong Kong will not protect you from prosecution in other jurisdictions. Under these circumstances it is important to coordinate a multi-jurisdictional leniency strategy to reap the greatest benefit of leniency applications in each jurisdiction concerned. Failure to do so could result in substantial fines in some jurisdictions despite having secured immunity in others.

How Do You Apply for Leniency?

Conduct an internal assessment to determine whether you are eligible to apply for leniency. Leniency is only available for cartel conduct under the First Conduct Rule, namely (1) price fixing, (2) market sharing, (3) output limitation and (4) bid rigging. "Ring-leaders" of the cartel, or otherwise those who have coerced other members to participate in the cartel, will unlikely be eligible for leniency.

Also, leniency applications will not be accepted once the Commission has decided to issue an infringement notice or to make an application to the Tribunal in respect of the reported cartel conduct.

As only the first leniency applicant can get full immunity from prosecution, establishing the order of application is key where multiple applications have been made in respect of the same cartel. To that end the Commission operates a marker system under which an intended applicant will be granted a marker to secure a position before a formal application for leniency is made.

Once the Commission determines there was cartel conduct and that leniency is available, it will notify the applicant with the first marker to make a formal leniency application. The applicant will be asked to sign a non-disclosure agreement to avoid tipping off other parties. If there are other applicants, they will be notified that they are not eligible.

Making a formal application (a "proffer") will require provision of details of the cartel conduct, how it affects competition in Hong Kong, and an estimate of the value or volume of sales affected by the cartel.

The proffer may be made orally or in writing, through your legal representatives on a without prejudice basis.

STEP 5: ENTERING INTO A LENIENCY AGREEMENT

Finally, if the conditions for leniency are met, the Commission will enter into a leniency agreement with the applicant, subject to the applicant agreeing to (among others) the following key requirements:

Leniency applicants should be prepared to cooperate fully with the Commission and provide valuable information in relation to the cartel and other cartel members. Breach of the leniency agreement may lead to its termination and consequent loss of immunity, following which, the Commission may offer immunity to another applicant who was not the first in line.

Deciding whether or not to apply for leniency can be a strategically complicated process particularly in light of knock-on effects it may have in other jurisdictions and exposure of the company to civil claims for follow-on damages.

Legal advice should be sought as early as possible with sufficient time for cartel conduct to be assessed and an exit strategy coordinated, whether by way of a leniency application or other solutions.