by Mark Watson
GuernseyFinance
0 Liked this Article
To print this article, all you need is to be registered or login on Mondaq.com.

Mark Watson, Tax Director at PricewaterhousCoopers and leader of the tax practice in Guernsey, compares and contrasts personal tax rates in Guernsey, Jersey, and the Isle of Man.

Current and feared future changes to UK tax have seen an increasing number of High Net Wealth (HNW) individuals look to relocate to the Crown Dependencies of Guernsey, Isle of Man and Jersey ('the Islands'), as well as other more tax-favourable territories around the world. At first glance the maximum personal tax rate for individuals of 20% in all three jurisdictions looks attractive; however the 20% rate can be dramatically reduced if tax caps, or in the case of Jersey the high value residency rules, are satisfied. The lack of capital gains taxes and inheritance taxes enhances the overall attractiveness of the Islands.

Tax is of course, not the only factor to be taken into account by HNW individuals looking to leave the UK. Considerations such as schooling, housing and the way of life also have a major role to play before a decision can be made. It is unusual to complete such an analysis and not conclude that at least one of the Islands stacks up as a very attractive proposition. In this article, though, I will provide you with the facts on the more technical key considerations around tax, housing and work permits.

A review of the tax regime needs to be complemented by looking at the housing and work permit rules. All of the Islands have implemented legislation to control population growth. The laws impact through housing licences or work permits. A summary of the rules for each Island is provided below.

Guernsey has two housing markets, the Local Market and the Open Market. Local Market housing is available to residents born on the island and to employees of companies where a skill shortage has been identified in the island. A company bringing an employee to Guernsey will obtain a licence for the employee for a specified number of years. These licences are issued by the Department of Housing and require completion of an application process. Open Market housing is available to everyone. On the purchase of an Open Market house, an individual is able to obtain a licence to reside on the Island for as long as they own the house.

Jersey has a special regime applying to HNW individuals who wish to move to the island. Th is is called the 'high value residency regime' and an individual's circumstances are measured against the following criteria:

There are also some circumstances under which anyone can purchase a house without needing to undergo the application process.

The Isle of Man requires newcomers to the island, who come for work purposes, to have a work permit before commencing work, but does not have separate housing markets.

For the purposes of this article, the assumption is that an individual will become 'principally resident' in Guernsey, 'resident and ordinarily resident' in Jersey, or 'resident' in the Isle of Man. Residency is determined by set criteria which differ between islands. The residence rules for each island are summarised below:

An individual is resident in Jersey for tax purposes if they:

In calculating residence for tax purposes, days of arrival are included but days of departure are ignored. An individual is ordinarily resident in Jersey if they are habitually resident in the Island.

Tax and the Tax Cap

The tax cap limits the tax payable by a Guernsey resident individual is £100,000 in respect of income from the following sources:

Individuals who derive the majority of their income in Guernsey may elect for a tax cap of £200,000 on all income, whether arising in Guernsey or not. The two caps are mutually exclusive – individuals cannot avail themselves of both.

Jersey does not operate a tax cap. For individuals who have been granted high value residency status, there are special rates of tax on non-Jersey source income as follows:

In looking at the £1m limit, Jersey income is included. Most individuals in this category are able to undertake pre-residence planning, which could restrict their Jersey tax liability to £100,000.

The Isle of Man operates a tax cap which limits the tax payable for Isle of Man resident individuals to £115,000 per tax year. The tax cap applies to income from all sources. 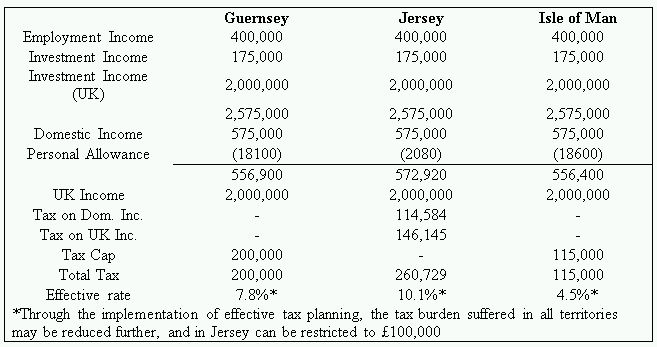 For the purposes of the example, double tax relief has been ignored.

Clearly, the higher an individual's income, the lower the effective rate of tax they would suffer. The Isle of Man cap applies to all income and results in a significantly lower effective tax rate for high earners. In the case of Jersey, the benefit of the lower rates of tax would only be enjoyed where an individual has over £1,000,000 of income.

The tax cap in Guernsey and the sliding scale in Jersey can provide an opportunity to engage in tax planning, particularly around optimising the balance of income received from domestic and non-domestic sources. In the Isle of Man there is the opportunity for some tax cap planning around the assessment of married couples, especially where there is a significant disparity between the respective incomes of the spouses.

The examples above only consider direct taxes and ignore the costs of other taxes such as social security, Value Added Tax in the Isle of Man, and Goods and Services Tax in Jersey.

Guernsey does not have a Goods and Services tax regime. Clearly if tax was the only consideration then the total tax contribution borne by an individual would need to be taken into consideration. These other taxes will have an important impact on the effective rates of tax indicated above.

In my experience, while tax might have been a key driver in making the initial decision to leave the UK it is also critical to understand how each jurisdiction's regime will affect a client who relocates. As demonstrated in the example above, it is essential to take advice prior to relocating to the Islands, in order to ensure that the tax position is optimised.

Other decisions such as schooling, housing and the way of life in each island form the overriding basis of the decision on where to ultimately settle. These decisions are very important as the tax benefits of relocating will only be effective if residence in the UK is broken.

In this respect, there have been a number of tax cases recently that have sought to test whether residence has actually been moved to another territory. An unhappy relocation, resulting in too many return visits and an insufficiently clear 'break' with the UK, could be fatal to effective tax planning.

ARTICLE TAGS
Guernsey Wealth Management Wealth & Asset Management
POPULAR ARTICLES ON: Wealth Management from Guernsey
Wealth Planning Concerns During The Pandemic
Ocorian
The pandemic has caused many clients to really assess what they want their lasting legacy to be.
Key Benefits Of Using BVI Structures
Harneys
Companies incorporated in the BVI are, by most measures, the most popular offshore holding structure in the world
Panama Corporation – Company Incorporation
Genshape Management Limited
Panama Corporations have been recognised across the world as successful offshore vehicles.
Seychelles Introduces A New International Business Companies (IBC) Regime
Appleby
Fundamental changes to the IBC regime in Seychelles are imminent with the enactment of the new IBC Act 2016 (New Act).
The Law On Wills In The British Virgin Islands
O'Neal Webster
This summary guide provides general commentary and direction to prospective purchasers of BVI property on the law relating to Wills in the BVI.
How To Decide Where To Incorporate Your Offshore Company?
Genshape Management Limited
The choice among numerous offshore jurisdictions can be complicated. A lot of parameters should be taken into consideration. Each offshore financial centre carries its own set of advantages, benefits and possible trade off
FREE News Alerts
Sign Up for our free News Alerts - All the latest articles on your chosen topics condensed into a free bi-weekly email.
Register For News Alerts
Article Tags
Guernsey Wealth Management Wealth & Asset Management
Related Articles
Leading The Way With First European Listing For ADGM Funds Industry Collas Crill
Navigating The World Of Ethical Investing As A Guernsey Trustee Ogier
International Private Client And Trusts Department Appoints 'First-Class' Private Client Lawyer Collas Crill
Guernsey Court Of Appeal Allows A Beneficiary To Terminate A Trust And Receive The Trust Assets, Despite There Being A Power To Appoint Further Beneficiaries Under The Trust Deed Herbert Smith Freehills
Redomiciling Of Companies Between Offshore Financial Centres – Why Businesses Are Consolidating Carey Olsen
Comparative Guides
Alternative Investment Funds
Mondaq Advice Centres
Global
Investment Immigration
Global
Trademarks in SAARC Countries
More MACs
Upcoming Events
Mondaq Social Media