by
AO Hall
0 Liked this Article
To print this article, all you need is to be registered or login on Mondaq.com.

Guernsey pioneered the concept of the cellular company and has been instrumental in establishing these innovative vehicles as internationally recognised corporate entities. The protected cell company was first developed in Guernsey in 1997. A number of other jurisdictions have since adopted similar legislation. However, a survey conducted by Reactions Magazine in June 2006 saw Guernsey voted the best domicile in Europe for PCC legislation, highly commended for its tailored legislation, and commended for its cost efficiency. Also in 2006, Guernsey introduced legislation creating a similar, but different, vehicle known as the incorporated cell company. Both protected and incorporated cell companies have proved very popular with promoters of investment funds established in Guernsey for a number of reasons.

A PCC is a single legal entity, but the company is made up of a core and a number of ring-fenced protected cells. It is a way of creating different portfolios of assets within one company. Designed primarily for use in the captive insurance industry, the potential benefits to the investment fund sector of such vehicles were also recognised from the outset.

Traditional "umbrella funds" have been popular in Guernsey and elsewhere for many years, but practitioners had always recognised the potential risk of "contagion" between sub-funds. For example, where an umbrella fund, established as an ordinary company, has a sub-fund which is highly geared and adverse market movements have resulted in the sub-fund's liabilities being greater than its assets, it is possible for creditors to look to the assets of other sub-funds (which might have a conservative investment and borrowing strategy) to cover their loss. This potential risk is removed by the PCC structure because, in the absence of a recourse agreement, in the event of insolvency of a cell the assets of one cell will not be available to creditors of other cells. Recourse to the core can be made only in the event of a prior recourse agreement. This statutory protection provides fund promoters with the benefit of a corporate vehicle whilst affording the same protection from contagion as an umbrella unit trust.

PCCs have both core capital (in the case of an investment fund, usually the shares held by the management company) and cellular capital, which is the capital invested in individual cells (via the issue of shares to investors).

Investment funds established as PCCs have a number of benefits:

PCCs can be approved by the Guernsey Financial Services Commission for use as authorised or registered investment funds. 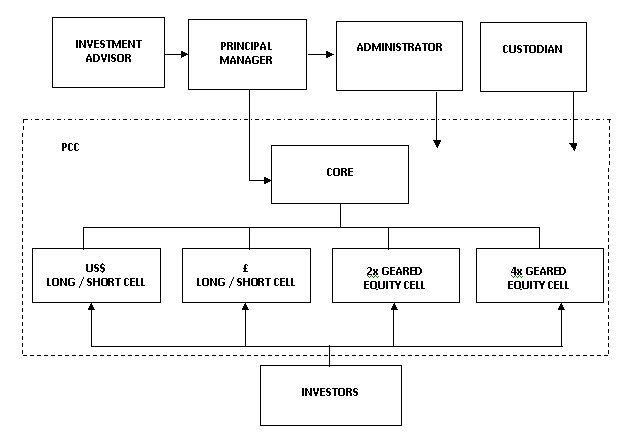 It should be noted that if one cell of a PCC is authorised as a particular class of fund (for example as an authorised Class B open-ended fund) then the other cells all have to be of the same class of authorisation.

Further details on these types of funds and the differences between them are given in our Red Guide: Obtaining Approval for an Investment Fund in Guernsey.

The following schematic is an example of what a PCC structure for an authorised open-ended Guernsey fund might look like:

An ICC has cells like a PCC, but in the case of an ICC each cell is a separately incorporated, distinct legal entity. The ICC and its cells all have the same directors and same registered office but the legislation specifically states that incorporated cells are not subsidiaries of the ICC. Unlike a PCC, a cell of an ICC may have a different memorandum and articles of incorporation to another cell in the same ICC. The ICC submits a combined annual return and only the ICC is required to create separate accounts.

This structure allows incorporated cells to exploit their status as independent legal entities, with the ability to contract amongst themselves.

The advantages of an ICC are:

cost savings – for example there would only be the need for a single set of accounts, annual return and share register. Each fund will continue to be a separate legal entity. This could be attractive to a group of funds managed by the same manager wishing to contract freely with each other but also wanting the cost benefits of a cellular company.

How AO Hall Can Help

AO Hall is a law firm with experience in structuring and launching a wide range of funds, including PCCs and ICCs. Along with the Island's other leading fund practitioners, AO Hall is a member of the Guernsey Investment Funds Association. We advise on all matters associated with investment funds and their establishment in Guernsey. In addition, the Firm is experienced in listing funds on the CISX, the London Stock Exchange Official List and AIM.

The Guernsey Financial Services Commission ("GFSC") requires all Guernsey established funds to appoint a local administrator. Through our local contacts, AO Hall can recommend local fund administration companies. Because AO Hall does not operate an associated fund administration business, it can provide objective and independent advice on the selection of fund administrators. We can also recommend sponsors for funds listing on the CISX and a trustee/custodian where required.

In addition, AO Hall's specialists have particular expertise and experience in preparing fund documentation to ensure compliance with regulatory requirements. We will assist fund promoters in submitting application documents to the GFSC and will liaise with the GFSC and local administrators throughout the approval process. AO Hall has an established working relationship with the GFSC and its staff. This professional service forms part of the overall fund advisory services AO Hall offers to new and existing fund promoters.

ARTICLE TAGS
Guernsey Wealth Management Wealth & Asset Management
POPULAR ARTICLES ON: Wealth Management from Guernsey
Wealth Planning Concerns During The Pandemic
Ocorian
The pandemic has caused many clients to really assess what they want their lasting legacy to be.
Key Benefits Of Using BVI Structures
Harneys
Companies incorporated in the BVI are, by most measures, the most popular offshore holding structure in the world
Panama Corporation – Company Incorporation
Genshape Management Limited
Panama Corporations have been recognised across the world as successful offshore vehicles.
Seychelles Introduces A New International Business Companies (IBC) Regime
Appleby
Fundamental changes to the IBC regime in Seychelles are imminent with the enactment of the new IBC Act 2016 (New Act).
The Law On Wills In The British Virgin Islands
O'Neal Webster
This summary guide provides general commentary and direction to prospective purchasers of BVI property on the law relating to Wills in the BVI.
How To Decide Where To Incorporate Your Offshore Company?
Genshape Management Limited
The choice among numerous offshore jurisdictions can be complicated. A lot of parameters should be taken into consideration. Each offshore financial centre carries its own set of advantages, benefits and possible trade off
FREE News Alerts
Sign Up for our free News Alerts - All the latest articles on your chosen topics condensed into a free bi-weekly email.
Register For News Alerts
Article Tags
Guernsey Wealth Management Wealth & Asset Management
Related Articles
Leading The Way With First European Listing For ADGM Funds Industry Collas Crill
Navigating The World Of Ethical Investing As A Guernsey Trustee Ogier
International Private Client And Trusts Department Appoints 'First-Class' Private Client Lawyer Collas Crill
Guernsey Court Of Appeal Allows A Beneficiary To Terminate A Trust And Receive The Trust Assets, Despite There Being A Power To Appoint Further Beneficiaries Under The Trust Deed Herbert Smith Freehills
Redomiciling Of Companies Between Offshore Financial Centres – Why Businesses Are Consolidating Carey Olsen
Comparative Guides
Alternative Investment Funds
Mondaq Advice Centres
Global
Investment Immigration
Global
Trademarks in SAARC Countries
More MACs
Upcoming Events
Mondaq Social Media