by Max Hilton
GuernseyFinance
0 Liked this Article
To print this article, all you need is to be registered or login on Mondaq.com.

Risk management is critically important in the AIFMD era. Max Hilton of Clarus Risk in Guernsey outlines the issues the industry should be addressing.

One of the key objectives of the AIFMD is investor protection, but targeting the manager rather than the fund brings a number of conceptual and practical issues.

Conceptually regulation of investment managers is not as clear-cut as, for example, regulation of banking where financial strength is unquestionably the overriding concern. AIFMD sets rules on the conduct of investment manager business and the controls over the delegation of key tasks. This is fundamental to the organisational structure of the alternative funds industry and understandably has led to concern and criticism that the directive will reduce the competitiveness of the European funds industry and add additional costs and burden on top of already challenging market conditions.

The financial crisis moved risk management to the forefront of many investors concerns and AIFMD now addresses this in legislation. For many firms, the need to separate the functions of portfolio management and risk management is one of the most troubling aspects of the directive. The 2012 Deloitte 'Alternative Investment Fund Managers Directive Survey' showed that 78% of managers had concerns over the delegation and substance requirements of AIFMD.

While it is common for an alternative fund to have a risk function, the norm, particularly outside the largest and most institutional group of funds is for that risk function to be junior, and to report to the portfolio manager, or 'PM'. Within such funds, the PM tends to have the ultimate control and veto over the portfolio, and controls the relationship with the Prime Broker(s).

In such a structure the risk function tends to be primarily compliance oriented and aims to enforce limits on risk taking. For offshore funds where the PM is onshore and acts as investment adviser, AIFMD presents a massive challenge. Whether the AIFM ends up being the onshore adviser or the offshore fund there is a separate and greater role for risk management as well as for the role for boards responsible for oversight.

They also tend to trade more following periods of marked underperformance. The roots of this lie in behavioural tendencies as well as in the traditional reward structures for managers. We have included an illustration of performance of a hypothetical long / short USD alternative fund during the eurozone debt crisis between 20th July and 12th August 2011 (see Figure 1). This chart illustrates the timeline and interactionbetween estimates of risk and actual losses. This timeframe is a period when financial markets became 'stressed', measured using a financial turbulence index as of July 28th 2011, six days after Euro zone leaders announced a second bailout package for Greece. 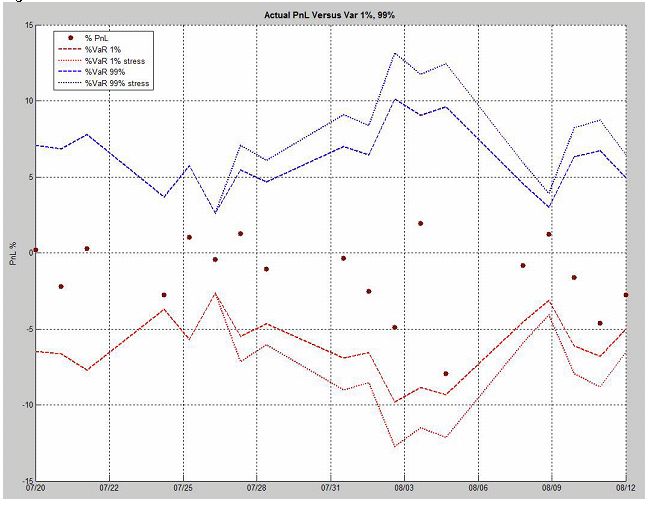 While the portfolio had suffered large daily losses at the beginning of the period approximately 3%, rather than reduce risk, the PM increased risk exposure. This occurred at a time when loss estimates were increasing, as a function of the market environment.

During this period a number of risk breaches occurred along with an extreme drawdown in performance. If we assume that the limit for daily VaR was a loss of 3%, the portfolio was outside of these boundaries for almost the entire period. The most serious daily loss occurred on 5th August, 11 trading days after the first risk breach and 7 days from the turbulence metric indicating a stressed environment.

The concern for the regulator, investors and the board in situations such as this is who has the ultimate control. In a similar fashion to how a fund board audit committee is responsible for overseeing accounting and financial reporting, a fund risk committee would ensure that the systems are in place to effectively measure and monitor risk such as this as well to demonstrate that the appropriate controls were implemented.

Beyond the prevention of absolute financial loss, AIFMD requires alignment of investment strategy, liquidity profile and redemption policy. Sophisticated investors have long been concerned about 'style drift', to ensure that their basis for allocating to an alternative fund remains intact over time. Prior to the financial crisis it was common for funds to include little in the way of risk parameters around an investment strategy, for example limits on concentration and exposures to certain types of assets and sectors. So long as Prime Brokers were comfortable providing risk capital there was little investors could do in terms of demanding information, or recourse, if the actual investment strategy (and performance) differed to that which they had reasonably expected.

Boards of AIFs will be increasingly concerned with the appropriateness of the mandate and resulting compliance. There is a trade-off to be had between providing enough flexibility for a PM to take advantage of their opportunity set and giving investors suitable comfort that the mandate will be adhered to.

The role of risk within investment management does not need to be limited to compliance and minimizing losses. As risk measurement and attribution techniques improve, so do possibilities to mitigate unintended and unnecessary exposures. Currency risk is often one of the largest risks in an international long / short portfolio yet the quantification and management of that risk is rarely considered. Similarly 'size' risk is often significant as managers tend to 'go long' smaller cap, less liquid securities and short more liquid and accessible large cap stocks. Awareness of the magnitude and performance impact of these exposures is the first step. Reducing unwanted and unnecessary exposures should have a positive impact on performance and is a further role for risk management to play. Where the AIFM delegates investment management but retains responsibility for risk management such a framework provides a basis for performance and risk attribution and for oversight of the portfolio manager.

Fall-out from the global financial crisis has brought about a number of improved risk and reporting practices. The market has evolved significantly with investors in alternative funds in a stronger position to demand more detailed and tailored risk parameters. Risk measurement techniques have also improved, with tools to differentiate between normal and stressed regimes to provide more robust risk estimates. AIFMD requirements around risk management however bring new, additional responsibilities to the boards of AIFs, not least because the responsibility for risk management sits with the board. Risk management functions will be tested by their ability to implement policy in an efficient and timely manner during periods of stress. Our case study illustrates that during a market crisis problems can quickly escalate and if the risk function is newly established or in a different geographic location to the PM its ability to implement remedial action and demonstrate control will likely be tested when least expected.