Digitisation has become a political buzzword in Germany, raising particular concerns with regard to the German healthcare system. German politics has long been lagging behind in creating an appropriate framework that balances health benefits versus data protection issues. In this context most recently a new "E-Health-Law" has been implemented in Germany to backbone an "E-Health-Card" and its desired intensified use in the future.

During the last years, the German lawmaker installed the framework of Electronic Health Records within the broader concept of an "Electronic Health Card", which is the basic setup for the implementation of a nationwide, technically mature telematics infrastructure for interconnecting insurants, doctors, hospitals and health insurance companies. The proceedings in that area serve the goal to create an arrangement of regulations within the German Social Security Code relating to statutory health insurance companies, to enable them to ultimately introduce, foster and maintain the use of information and communication technologies within the public health domain. The most important stakeholders are the German Federal Ministry of Health, which is responsible for the design of the legal framework of the telematics infrastructure and the German Society for Telematics (gematik), the latter being an umbrella organization formed by the most important stakeholders and unions in the German social security and particularly health insurance area. Gematik is responsible for concrete undertakings in elaborating and implementing the telematics infrastructure.

The idea of Electronic Health Records and ePrescriptions in Germany is embedded in the concept of an "Electronic Health Card" ("elektronische Gesundheitskarte"). The legal basis for this card has been set out in the beginning of 2004 within the "Law to modernize the Statutory Health Insurance" ("GKV-Modernisierungsgesetz"). This law seeks to advance the concept of the former "Health Insurance Card" ("Krankenversichertenkarte"), and adapt its rules to the modern information society as well as establish a telematics infrastructure in the public health domain.

In mid-January 2015 the highly anticipated bill on the so-called "E-Health Law" (Statute for Secure Digital Communication and Applications in the Health Sector) was presented, triggering a debate on digitisation, data protection and health in Germany. The various reactions to the draft bill were largely critical, mainly for insufficiently protecting medical data and for patients not having access to their data. For instance, the Privacy Commissioner of Schleswig-Holstein criticized the draft law on e-health for insufficient protection of medical data. Although some aspects of the draft law were welcomed, such as the launch of telematics infrastructure and the "Electronic Health Card", the Privacy Commissioner held that the draft did not go far enough to protect individuals' medical data and prevent the growing trend towards the "transparent patient". In an attempt to act upon the critics changes were made to the draft bill. However, the amendments made little change to the basic approach and structure of the bill.

On 4th December 2015 the German Federal Parliament (Bundestag) has approved the new law designed to ensure that the "Electronic Health Card" system is operating by 1st July 2018. According to the German government, the Act has different objectives:

The key element, the "E-Health Card" (known in other nations as medical smartcards) which allows digital storage and retrieval of patient data, has been plagued in Germany by controversy and delay since it was first proposed in 2002. Access to data on the "Electronic Health Card" for health professionals is generally connected to further requirements, e.g. ensuring they only get access via a health professional ID card secured by electronic signature measures.

The applications that go along with the "E-Health Card" will be introduced gradually. In an initial step, administrative data relating to the insured person, such as their name, date of birth, address as well as health insurance data including their personal health insurance number and insurance status (member, affiliated family member or retiree) have been stored. The "E-Health Card" carries a photograph. Exceptions are made only for young persons up to the age of 15 years and insured persons who are unable to co-operate in the taking of a photograph, such as immobile patients in need of long-term care. The photograph should help to avoid the risk of confusion and serves to control the abuse of benefits and services. The back of the "E-Health Card" can be used for the "European health insurance card" and renders treatment and health care possible within Europe.

The main utility of the "E-Health Card" shall lie in its medical applications that are voluntary for the patient. With patients consent, in future, physicians will be able to retrieve important emergency data directly from the "Electronic Health Card". Moreover, electronic referral letters and cross-facility electronic health records will be possible. From 2018, important data (e.g. known allergies, implants or previous diseases) may be saved in the new system with patient approval, so that physicians handling emergencies can access it.

Moreover, the bill is intended to input patients' specific medication plans onto the "Electronic Health Card" in order to allow different physicians prescribing additional medicine to access the information, thereby helping to avoid critical interactions between medicines. From October 2016, a patient on at least three different prescribed medicines will have the right for his or her personal medication plan to be included on the "Electronic Health Card" for physicians and health insurers to access. In the long term, the government intends to include medication plans for all other patients on the cards.

This means, that every insured person will decide for him/herself whether and to what degree they wish to make use of the possibilities offered by the "Electronic Health Card" for storing medical data. He/she will also decide whether, and to which degree, use is to be made of an application such as the emergency data, whether the card is to be used to document his/her willingness to donate organs, or whether the electronic patient record is used at a later stage. Furthermore, patients will have access to their data and be able to print them or have them deleted. As was the case with the previous card, only the insured person's administrative data is to be mandatorily stored on the "Electronic Health Card".

A lot of important personal health data will be saved on the "Electronic Health Card" or used for digital networking. As a result, the bill aims to clarify data access rights concerning the cards. Access to data must be recorded and insurers are obliged to inform patients about data saved. According to the bill, patients will be responsible for their own data and will be able to decide what will be saved and who can access it.

The Federal Ministry of Health has highlighted that the safety level of the underlying telematics infrastructure is already higher than that for bank cards and major emphasis was being placed on data protection which is guaranteed by both statutory and technical means. The transmission of sensitive medical information does not take place through the internet but via a secure health network set up for this specific purpose. Medical data is encoded even before it leaves the doctor's practice. In the process, two safety precautions are in use simultaneously. Just like with a bank card, the insured patient determines who has access to the data by inserting his/her card into the card reader and entering a PIN code. However, a second safety precaution then comes into play, so called "two key principle": 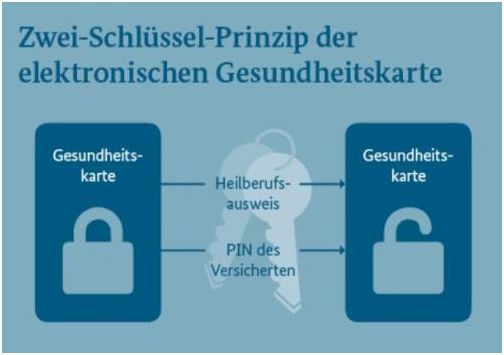 Even if there is by now a general agreement in Germany among health care practitioners that "E-Health" is absolutely essential for dealing with the major future challenges of the German health sector: a shortage of doctors (especially in rural areas), the demographic change with an ever-aging population, and increased cost-pressure in the healthcare business, Germany is lagging behind in "E-Health" matters, especially in comparison to Nordic countries like Denmark, Iceland and Norway. According to a study by the European Commission, a comprehensive data-exchange in Germany's health sector in most cases fails at the outset because of the lack of IT-infrastructure in hospitals and little interconnection to other regional and national health institutions.

In the area of "E-Health", which broadly encompasses health care practices supported by communication and information technologies, the enduring battle between innovative business ideas and traditionally strong German consumer protectionists has been particularly polarised. Germany is now gradually also beginning to come round to realising the potential of digitalisation in the healthcare industry, yet there are still many issues to be resolved. Whilst supporters dream of a fast "data autobahn" with numerous benefits for patients and service providers, the major issue of data security in particular remains a topic for critics. Critics especially point to the need to clarify how to ensure that the IT service providers involved also adhere to the data protection regulations – an issue which ultimately relates to the safety of health-related apps such as those available for smartphones or fitness applications. Besides, other obstacles must be overcome in developing the legal environment for telemedicine services in Germany, in particular issues relating to professional law for the German legal profession, e.g. the professional-law ban on remote treatment.

It remains to be seen what changes in legislation will result from the further discussions after the approval of the "E-Health Act" in Germany.