Most Read: Contributor Germany, May 2020

Germany: The legal form of a European Stock Corporation is an interesting alternative for mid-sized partnerships and also for large corporations

by Friedrich Merz , Dr. Ulrike Binder and Dr. Hendrik Otto
Mayer Brown
0 Liked this Article
To print this article, all you need is to be registered or login on Mondaq.com.

Formation of a European Stock Corporation

A European Stock Corporation ("Societas Europaea", abbreviated "SE") is a type of corporation which can be established in any European Union member state pursuant to European Law. In early 2009 there were approximately 350 SEs throughout the EU, a significant number of which were established in Germany. Many companies are currently considering their possible transformation into the legal form of an SE. The spectrum of companies that have either already transformed into an SE or are considering transforming varies from large, listed companies to mid-sized partnerships.

As of October 2004, it is possible to establish and enter an SE into the commercial register of any member state of the European Union ("EU") and the European Economic Area ("EEA"). The establishment of an SE is governed by the Regulation regarding the Statute for the European Company ("SE Regulation"), valid in all EU and EEA member states as uniform and directly enforceable law. In addition to regulating the establishment of an SE, the SE Regulation also contains regulations regarding the minimum capital, internal constitution, shareholder meetings, accounting and liquidation of an SE as well as governing the transfer of an SE's registered office to another EU or EEA member state. However, it does not contain any concluding regulations. An SE is treated as a stock corporation of the respective member state in which the company has its registered office and is subject to:

Employees' participation in SEs is regulated by an EU directive which was implemented in Germany by the Law regarding the Employees' Participation in a European Company (Gesetz über die Beteiligung der Arbeitnehmer in einer Europäischen Gesellschaft, SEBG).

SEs are established in accordance with the SE Regulation (irrespective of member state in which it has its registered office). However, their legal organizational form will differ depending on the national laws under which the SE is registered, just as is the case for stock corporations.

Over the last few years SEs have gained in popularity, particularly in Germany. An SE offers advantages that other company forms do not, in particular:

The establishment of an SE

An existing SE can also establish a subsidiary SE.

The primary forms of establishment, as set out in the SE Regulation, are as follows: 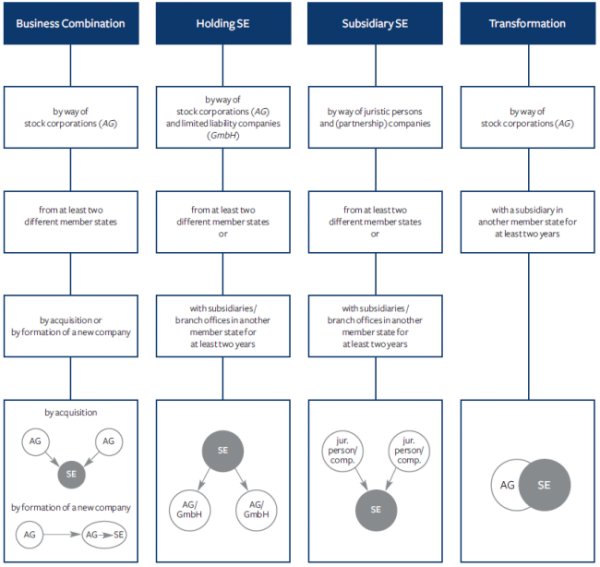 The law governing SEs permits corporate governance models, which neither the German stock corporation nor the limited liability companies laws permit. The law governing SEs allows a choice between the two-tier management system (consisting of a board of directors and a supervisory board), and the one-tier management system (consisting of an administrative board which combines the functions of the board of directors and the supervisory board).

An SE can, like a German stock corporation, have a two-tier management system. The SE is managed by a board of directors which is supervised by a supervisory board. The supervisory board's size is not dependent upon the number of employees in the SE (as is the case for a German stock corporation). This makes it possible for companies with equal representation of employees and representatives of the employer on the supervisory board to reduce the supervisory board's size by changing the legal form of the entity into an SE and thereby increasing the efficiency with which decisions are made in the organization. Additionally, it is possible to include a provision in the SE's articles of association that the board of directors' chairperson has a veto right. In this case the board of directors' chairperson has a particularly strong position.

Labor law aspects of an SE

No independent tax law was created for SEs, the tax laws generally applicable to corporations apply. However, the tax laws were slightly modified in relation to SEs in the SE Regulation's implementation in 2006. Furthermore, the implementation of the SE as a legal form was a catalyst for changes to the German transformation tax law, bringing German tax law more in line with the rest of Europe and making the transfer of a company's registered office easier.

Tax issues should be considered during the SE's planning phase and before its establishment. As noted previously, it is possible to establish an SE in more than one member state of the EU or EEA. The following should be considered when deciding on the appropriate member state registered office: the effective tax burden, the net of double tax treaties, existing group tax regimes, the regulation regarding the taxation of dividends, the tax deductibility for financing expenditures and possible substance requirements for cross-border activities. When choosing one of the forms of establishment of an SE, one should bear in mind the taxation effects of such form, for example, an imminent disclosure and taxation of secret reserves or demise of existing losses carried forward upon establishment of all participating legal entities and their shareholders.

The SE's ongoing taxation is no different to the taxation of other corporations, for example, a stock corporation (AG) or a limited liability company (GmbH). The "general" tax limits become particularly important regarding cross-border activity. As the SE and its shareholders, or, as the case may be, subsidiaries, are always domiciled in at least two EU member states, the applicability of different taxation systems can lead to a double taxation, as the tax authorities in different countries want to tax the SE on the same basis. If the SE is active within the EU predominantly via permanent establishments, the profit limitation between the parent company and permanent establishments and the assignation of the economic assets are of great relevance. Questions regarding transfer prices are the centre of attention for foreign subsidiaries.

The cross-border transfer of an SE's registered office from Germany to another member state in the EU or EEA only initiates a taxable disclosure of the secret reserves insofar as the economic assets are "detangled", i.e. access to German taxation is withdrawn and the assets do not remain in a domestic permanent establishment of the SE. It is advisable to pursue in-depth tax advice as well as to regularly co-ordinate with the tax authorities in advance of establishing an SE.