Most Read: Contributor Canada, May 2020

While it is still too early to take a position on the actual consequences of the Brexit, the main tax implications for groups with operations both in France and in the UK can and should already be anticipated. Notably, Brexit's entry into force will call the application of the EU legislation and regulatory system into question in the UK. One therefore wonders whether the numerous double tax treaties entered into by the UK will be sufficient to compensate for the disappearance of the tax benefits resulting from the EU legislation.

While it is still too early to take a position on the real consequences of the UK's exit from the European Union (EU), the main tax implications for groups with operations both in the EU and in the UK can and should already be anticipated.

Notably, Brexit's entry into force will call the application of the EU legislation and regulatory system into question in the UK. One therefore wonders whether the numerous double tax treaties (DTT) entered into by the UK will be sufficient to compensate for the disappearance of the tax benefits resulting from the EU legislation.

The below provides an overview of the main identifiable tax impacts of Brexit.

1. The impact on withholding tax (WHT): end of the application of the "Parent-Subsidiary" and "Interest and Royalties" Directives and return to conventional rates

The tax treatment of dividends, interest and royalties has been largely influenced by the Parent-Subsidiary Directive1 and the Interest and Royalties Directive2 which would no longer be applicable after the Brexit.

From a French tax standpoint, the impact of the Brexit on these flows can be summarized as follows:

2. The impact for tax consolidation groups 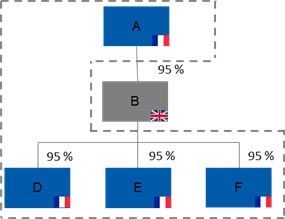 As a reminder, since the famous "Papillon"3 judgment of the Court of Justice of the European Union (CJEU), French subsidiaries held through a subsidiary located in the EU or EEA may be tax consolidated with the other French companies.

In addition, since 2014, French sister companies whose joint parent entity is established in the EU or EEA can form a tax consolidated group ("horizontal tax consolidation"). 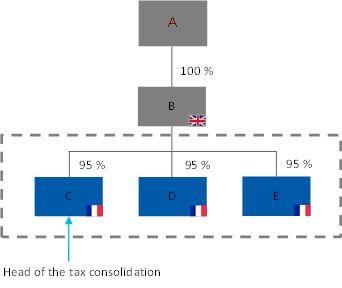 The Brexit should trigger the termination of the existing "Papillon" and horizontal tax consolidated groups, except if the UK joins the EEA immediately after exiting the EU. The potential impacts and costs of these terminations should be anticipated (e.g. de-neutralisations of intra-group transactions, indemnity to be paid between consolidated entity), notably to limit them to the extent possible (e.g. by transferring the shares of French companies to ensure the continuity of existing French tax group).

Similar consequences should be anticipated in EU countries having similar "Papillon" and horizontal tax consolidation systems.

3. More generally, it means the end of the benefits derived from the application of European directives

In addition the impact on the Parent-Subsidiary Directive and the Interest and Royalties Directive, the Brexit would called into question the application of the:

4. Other effects of Brexit to consider in France

Beyond the consequences mentioned above and the necessary adaptation of British domestic tax law, more broadly, for companies, Brexit should have an impact on many French tax systems, notably:

Any EU country conditioning certain tax benefits to the localisation in the EU of an expense / income / operation may no longer provide such benefit to UK-located operations. This needs to be checked on a country-by-country basis.

On the contrary, Brexit should not have any impact on transfer pricing since it is mainly governed by tax treaties and Organisation for Economic Co-operation and Development (OECD) guidelines which will remain in place.

In light of the above, while Brexit will undoubtedly disturb and make future relations more complex between the UK and the EU Member States, the UK could compensate for the loss of Community benefits by introducing a (very) advantageous tax policy.

This change in tax environment could also modify the strategy for setting up European holding companies despite the privileged status they currently hold in the UK, notably to continue benefiting from the benefits / protections offered by the EU Directives and the case law of the Court of Justice of the EU.

1 Council's Directive 2011/96/EU of 30 November 2011 on the common tax system applicable to parent companies and subsidiaries of different Member States;

2 Council's Directive 2003/49/EC of 3 June 2003 on a common tax system applicable to interest and royalty payments made between associated companies of different Member States.

4 Council's Directive 90/434/EEC on the common tax system applicable to mergers, divisions, transfers of assets and exchanges of shares as regards companies of different Member States;

5 Council's Directive 77/388/EEC of 17 May 1977 on the harmonization of the laws of the Member States relating to turnover taxes - Common system of value added tax: uniform basis of assessment (repeatedly amended);

6 Council's Directive 2014/107/EU of 9 December 2014 amending Directive 2011/16/EU as regards the automatic and mandatory exchange of information in the field of Tax;

7 Multilateral Convention for the Implementation of Tax Treaty Measures to Prevent the Erosion of the Tax Base and the Transfer of Profits of 7 June 2017.

Read the original article on GowlingWLG.com