Luxembourg has more than 190,000 cross-border commuters, most of whom live in Belgium, France, or Germany. Amazingly, since Brexit there have been more and more commuters from the UK too.

Given the traffic and travel issues arising alongside this trend, there have recently been more calls for flexible work arrangements. Working from home could be one such arrangement, though it comes with implications on income tax and social security—affecting both employee and employer.1

Luxembourg has signed tax treaties with (among other countries) all of its neighbours and the UK, which enable it to tax income gotten from an employer in Luxembourg. However, the country of residence may also tax an employees' worldwide income, which would lead to double taxation2—were it not for the tax treaties.

Luxembourg's treaties with Belgium and Germany have a special provision whereby the full employment income is taxed in Luxembourg only if the number of days worked outside of Luxembourg doesn't exceed a certain limit. For Belgium this limit is 24 days per year; for Germany it's 19. In the recently signed tax treaty with France (not yet in force), this threshold is 29 days per year. 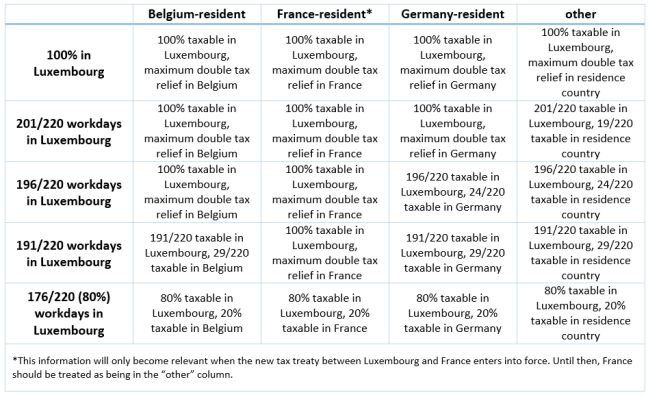 If the number of workdays outside Luxembourg exceeds the threshold, then only the employment income related to the workdays in Luxembourg may be taxed in Luxembourg. A day worked at home, i.e. in the country of residence, counts as a workday outside of Luxembourg. Business trips outside Luxembourg count as non-Luxembourg workdays too. Thus, for employees, the physical location where the work is performed counts. (Different rules apply for non-executive directors and the self-employed).

It is also possible to adjust the withholdings through payroll for workdays not taxable in Luxembourg. Ideally, such an adjustment would be done each month based on the actual days worked. However, for residents of Belgium and Germany it might only become clear in December whether they exceed the threshold. Thus, depending on the number of non-Luxembourg days worked, employers may decide to reconcile every quarter or at year-end. Most important is that the correct allocation to Luxembourg workdays is included in the annual salary certificate.3 Ultimately, adjustment through payroll ensures a direct refund of Luxembourg tax.

The combined Luxembourg and residence country taxes depend on individual circumstances. With only part of the employment income taxable in Luxembourg, the overall tax bill could be higher or lower than a 100% Luxembourg taxation. Working outside of Luxembourg can also affect your eligibility for Tax Class 2.4 Later in this article I include a few (simplified) examples, showing the financial impact of split taxation.

In this example, the Luxembourg employer would have to register with the French social security authorities and administer a French payroll for these social security contributions.

Costs for social security vary greatly within the EU: in Luxembourg almost all social security contributions are capped, but in Belgium and France they are not. Especially for higher incomes, the increased cost can be significant—see the implications in the examples below. (Check out this report for a high-level comparison of tax and social security costs in 17 European countries).

The calculations below are based on an employee of a Luxembourg company who lives outside of Luxembourg and is married with two dependent children.

From tax and social security perspectives, working from home could significantly affect an employee's net income. It may also have cost implications, and/or create a payroll obligation, for the employer.

Companies who employ remote workers or cross-border commuters: implementing a policy is probably a good idea. Such a policy should explain the potential implications of working from home and include the conditions that apply.

In addition to all that, there may be HR considerations when working from home—watch this blog for more on that topic soon!

1 Corporate tax and VAT implications with respect to a potential permanent establishment are not covered.

2 Double tax relief is typically provided by an exemption with progression or a tax credit, but varies per country and tax treaty.

4 Read our newsletter about the new rules per 1 January 2018 for non-residents.

6 It has a broad scope and many provisions. For the purpose of this article I only focus on employees who work in more than one country, i.e. multistate workers.