China: Why There Is No Case Law In China

by Edward J. Epstein
Troutman Sanders LLP
0 Liked this Article
To print this article, all you need is to be registered or login on Mondaq.com.

As we begin to drown in the morass of statutes and administrative regulations that have spewed forth from China's law making bureaucracies in the last 30 years, expectations of China's legal system have increased to the extent that multinationals are now asking "how is this regulation interpreted?" or "is there a precedent?" These are perfectly reasonable questions for business people looking for certainty in the law, but sadly the answers are rarely comforting.

The overarching reason for this uncertain state of affairs is political: the interpretation of laws and regulations is generally reserved to the bureaucracies that made them and others who are responsible for enforcing them. The courts thus have little say in the matter. We could end our discussion here, but the legal position is obviously more nuanced and worthy of further investigation.

A Rule of Law without Judicial Interpretation?

A large part of the daily work of the courts in developed liberal democracies is to interpret and apply legislation. Even in common law countries where case law represents a huge body of law in itself, most appellate court work is about statutory interpretation. In contrast, socialist China has clung to the principle that the legal bureaucracy that makes law shall say how to interpret it. This principle applies to laws, regulations and rules made at national and local levels by legislatures, ministries, commissions, local government and their various branches. It does not leave much room for judicial interpretation, which is reserved solely to China's highest court: the Supreme People's Court.

All of the above interpretations have normative effect, but only interpretations of national laws are widely disseminated. "Replies to requests" are in effect pre-determinations of a case being heard in a provincial level high court. In practice, intermediate courts make such requests to high courts too, but the replies are not binding.

Unless the Supreme Court has already issued an interpretation on how to apply a particular provision of law, the lower courts are at sea along with the lawyers arguing cases and their clients. Of course, with thousands of laws and regulations to interpret, this is a herculean task.

Cases Have No Precedential Effect

Although the Supreme Court does hear appeals from high courts and review other cases, even its decisions have no precedential effect in China. Unlike the Anglo-American common law, judicial decisions are neither binding nor persuasive in the lower courts in China. This is technically true in all civil law countries, but most have developed principles and procedures to entrench or at least enhance the precedential effect of decided cases. The problem is particularly pronounced in China because of the heavy hand of bureaucracy. References to judicial precedents cited in support of submissions to court are routinely dismissed by opposing counsel because "China has no system of judicial precedent" or otherwise ignored by the court.

However, there has been a trend among the Chinese courts to use higher court decisions as guidelines if not precedents. Cases have been gazetted by the Supreme Court for many years and the trend has become clearer since it issued Stipulations on Guiding Cases in 2010. Guiding Cases are selected by the Supreme Court on the basis of their public impact and usefulness in serving as guidelines for deciding other cases because they are similar or the law is abstract or the case is complex.

Although Guiding Cases are not strictly binding on the courts, they are required to "refer to" them when deciding similar cases and follow their key points, which must be included in the reasoning given in the lower court's decision, but not as the basis of the judgment. Ironically, since lower courts may refer their own court decisions to the Supreme Court that may decide they qualify as Guiding Cases, it is also possible that higher courts may be required to refer to Guiding Cases from lower courts when adjudicating similar cases. In five years, however, the Supreme Court has published only 52 Guiding Cases, which means that their effect is very limited.

Even in apparently "civil" or "commercial" cases the hand of bureaucracy may not be far from door of the courts. In contract disputes the quality of goods and services will often be determined not by standards agreed by the parties, but by state standards promulgated and enforced by the quality bureaucracies established for this purpose. Industry standards, let alone the parties' previous course of dealings, will be irrelevant if there is an applicable state standard. A government testing center determines what this is without itself ever having the experience of manufacturing a single product.

It is inevitable that concepts such as "good workmanship" and "merchantability" are meaningless in a legal environment that has no case law to codify them. For all the beauty and precision in their drafting, it is unimaginable that the English Sales of Goods Act (now almost 120 years old) and the UCC could have been so successful without case law. The success of Chinese codifications will equally depend not on doctrine, but on the certainty and predictability of their application by an independent judiciary which interprets them consistently, publicly and, above all, authoritatively.

The Hierarchy of China's Ordinary Courts 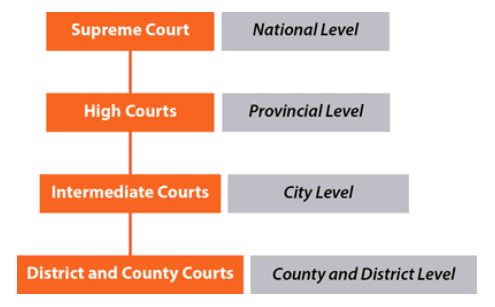