by Rose Zhou , Richard Bao and Julie Zhang
Grant Thornton
0 Liked this Article
To print this article, all you need is to be registered or login on Mondaq.com.

On December 21, 2015, the State Administration of Taxation of China ("SAT") issued "China Advance Pricing Arrangement Annual Report (2014)" ("the 2014 annual report")1. This is the sixth advance pricing arrangement ("APA") annual report issued by SAT since the first one ("the 2009 annual report") came out in 2009. The 2014 annual report, basically following the framework of 2013 annual report, include the updated 2014 statistics As stated in the foreword, the international tax reform has reached a critical point where substantial progress has been made based on the Base Erosion and Profit Shifting (BEPS) Action Plan. In 2014, China became a net capital exporter as the actual overseas investment exceeded the investment inflow and an open economy featuring free crossborder flow of production factors, high efficient allocation of resources around the world and growing integration of domestic and foreign markets is on the way of forming. Within the context of deepening of economic globalization, China international taxation mechanism and administration system are witnessing continuous perfecting. Faced with large amounts of applications and limited staff, the 2014 annual report stresses that the quality of the application documents will be the focus of tax authority when deciding which application shall be given priority treatment. A submission that represents innovative TP methods or high quality quantitative analysis for intangibles, cost savings or market premiums will be put on the SAT's priority list.

The main contents of the report in 2014 are as follows:2

We are going to put forward our observations as well as understandings on the current status and future trend of China APA program reflected from the official statistics in the report.

New contents in the 2014 annual Report

In 2014, Chinese tax authorities concluded and signed three unilateral APAs and six bilateral APAs. From 1 January 2005 to 31 December 2014, the Chinese tax authority has received 162 intentions or formal applications for bilateral APAs in total (of which 43 have been concluded).The countries involved added up to 16, which include Japan, Korea, the United States, Denmark and Singapore, among others. In addition, the SAT has received numerous enquiries on bilateral APAs from enterprises. It is expected that the number of APA applications will go on rising.

APAs by quantity and time taken

The 2014 report reiterates the factors which may qualify an application for priority treatment. With limited staff and increasing number of APA requests, when handling the APA applications, the tax authority normally will consider the following factors: a) general principle: first come, first served. b) the quality of the submission, e.g. whether documents submitted are complete and capable of clearly reflecting the transactions across the entire value chain or supply chain; whether the transfer pricing method proposed is appropriate and the calculation is correct. In case an applicant falls short of the requirement, the enterprise will be required to make additions or revisions necessary. c) whether an application is special in terms of industry or location and merits prioritized attention. d) for a BAPA application, whether the BAPA counterparty country's intention to pursue the arrangement is strong enough and whether it attaches due importance to the BAPA will also be important considerations. Among these factors, the key point will be the quality of the submission. A submission that demonstrates employment of innovative TP methods or high quality quantitative analysis for intangibles, cost savings or market premiums be priority treatment by the SAT.

The report publishes the official statistics on in-process and signed APAs for the period from 1 January 2005 to the end of 2014. The following trends are reflected from the data:

Some important statistics charts are extracted as follows:

A. Statistics of APAs by calendar year and phase 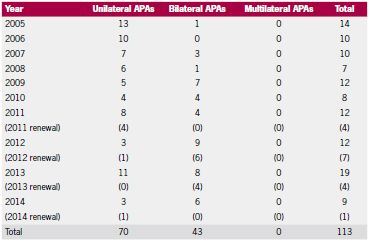 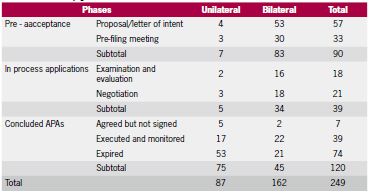 B. APAs by transaction types 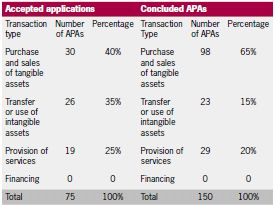 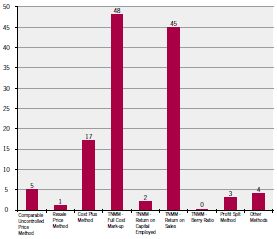 Chart 1 indicates that the TNMM is the most commonly used transfer pricing method among the signed APAs, accounting for 76%, and the second most popular transfer pricing method is the cost plus method. However, the report also points out that the Chinese tax authority expects enterprises to be more cooperative during the APA review and evaluation phase, provide sufficient transactions and prices information and promote the wider use of the resale price method and the profit split method in the APA program. 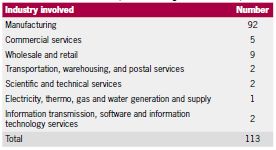 With the rapid development of economic globalization and multi-national corporations in recent years, the transfer pricing arrangement between related parties is becoming more and more complicated in aspects of the transaction amount and transaction types. As a result, enterprises as a whole are calling for more tax certainty concerning intercompany transactions. These enterprises include multi-national groups with investment in China as well as more and more Chinese enterprises that are "going global". With the unveiling of BEPS Action Plans, SAT reiterated the significance of BEPS Action Plans in the 2013 annual report, signalling its strong determination and motivation to crack down tax avoidance. As an innovative win-win system for tax authority and enterprises, APA is an effective way for enterprises to obtain more legal certainty as well as a powerful tool to ensure tax authorities stable revenue in the future.

Based on the 2014 annual report, we note a reduction of the number of staff at the SAT headquarters in charge of the processing of TP and APAs issues (who are also charged with TP-related MAP cases) compared to last year. It is predictable that a fall in staffing will lead to stricter screening requirements.

When deciding which application should be processed first, the qualities of the submission will the main concern of SAT. To ensure the timely acceptance and to speed up the processing of the application, the taxpayer should make sure the submission meet the priority treatment conditions both in quality and sufficiency terms. We suggest that the taxpayers should solicit the help of professional agency at an early stage to ensure the APAs submitted by the enterprises would be given priority by the SAT.

Since 2005, through the issuance of administration laws and regulations, China has being engaged in the process of actively improving its APA system, thus to facilitate APA negotiations and allowing more enterprises to apply for the APA. This APA annual report represents one of the key moves of the SAT to increase the transparency of the APA program. The SAT hopes it will provide useful guidance to taxpayers to have a good understanding of development and future trend of China's APA practice, which will be of great importance for enterprises to apply APA in a correct and appropriate manner.

How can Grant Thornton help you?

Grant Thornton has a specialised China transfer pricing team that is fully committed to your business needs. Our team consists of seasoned Transfer Pricing advisors. We aim to deliver the most efficient and flexible TP solutions that help you deal with APA. To be specific, we can assist you in the following aspects during an APA application:

2 Although the report points out in the section of Notes that this report does not have legal validity, its detailed contents and official statistics on historical data of APA have definitely prevalent meaning of reference and guidance for taxpayers to have a thorough understanding on the current system and future trend of APA in China.