In China, industrial design is governed by the patent law. The design patent system is popular in China mainly because a patent right can be granted quickly and at a relatively low cost, as design patents are not subjected to substantive examination. In 2011, over 522,000 applications for design patents were filed in China. That amounts to about one third of the total filings for all three types of invention-creations (i.e. inventions, utility models, and designs). At the same time, infringement and other contentious matters based on design patents are also on the rise, as people are increasingly using the court and administrative system to resolve their disputes. Accordingly, court proceedings in connection with design patents are becoming more numerous, including both patent infringement cases and administrative appeal actions challenging invalidation decisions made by the Patent Re-examination Board (PRB) of the State Intellectual Property Office. We will discuss some of the recently reported decisions to help give readers a better idea of recent developments in the Chinese design patent system.

According to the Chinese Patent Law, "the extent of protection of the patent right for design shall be determined by the design of the product as shown in the drawings or photographs". This means that all the elements of the design shall be considered when its scope of protection is determined. As can be seen from the above pictures, the alleged infringing design is obtained by adding pattern and color to the patented design. Although the difference in the overall visual effect of the two designs is remarkable, it would obviously be unfair to the patent owner and undermine the spirit and effectiveness of patent law if the defendant could escape liability by making such simple modifications to the patented design.

In order to properly apply the patent law and clarify how patent infringement should be determined, the "Interpretation of the Supreme People's Court on Several Issues Concerning the Application of Law in the Trial of Patent Infringement Dispute Cases" was released on December 28, 2009. Article 11 of the Interpretation confirms that "when determining whether designs are identical or similar, the people's court shall consider [...] the overall visual effect of the design to make a comprehensive judgment", and also emphasizes that "the overall visual effect of a design is usually more affected by technical features of a patented design which are distinct from those of the existing designs (i.e. "point of novelty") as opposed to other design features of the patented design".

The Supreme People's Court places heavy emphasis on the "point of novelty" because industrial design in the sense of patent law is regarded as intellectual property of an innovative type, and what is entitled to patent protection is the "design scheme" of the product, which may consist of several design features. Unless authorized by the patentee, others are prohibited by patent law from exploiting identical or similar design schemes for commercial purposes. For this reason, a patent is infringed if the alleged infringing product as a whole misappropriates (reproduces or imitates) the design scheme of the patent.

In this lawsuit, it was determined that the shape of the product should be preferentially considered in judging patent infringement because the design patent does not claim color protection and contains no pattern, and a regular consumer, based on his knowledge and cognitive ability, would realize with no doubt that the alleged infringing design misappropriated the design scheme, especially the shape (being one of the three basic elements of a design, the shape of a product is to some extent independent from the pattern and color of the product), of the patented design when the two designs are observed as a whole. Therefore, the court determined that the two designs are similar to each other and the defendant is liable for patent infringement.

As discussed above, the infringing design was obtained by making modifications and improvements on the patented design. Although the exploitation of the patented design is barred by the design patent, it is theoretically possible for the infringing design to apply for a patent and obtain protection, for example based the pattern and/or color of the design.

This administrative appeal case was finally decided by the Supreme People's Court in December of 2008. The facts of this case are as follows: on August 6, 2002, Kewan applied for five design patents entitled "Dyeing Machine (J, K, L, M, N)" before the Chinese Patent Office. The five designs are similar but not identical. The patents issued on these designs were later revoked by the PRB in accordance with Paragraph one, Rule 13 of the 2001 edition of the Implementing Regulations of the Chinese Patent Law, which provides that "for any identical invention-creation, only one patent right shall be granted".

The decision issued in Kewan Ltd. v. the PRB triggered many discussions in the profession and general public. Since it is common for applicants to develop a series of similar designs for the same product at the same time and put them into the market, law makers and practitioners realized that there is a need to establish a mechanism to protect these similar designs. Highly influenced by this case, in the 2009 edition of the Chinese Patent Law, Article 31 was amended to allow "two or more similar designs for the same product" to be filed as one application. This case is just one example of how decisions made in such cases have tremendous impact on legislation.

There are many similarities between these two cases. They are both administrative appeal cases concerning design patents and they were both heard by the Supreme People's Court in 2010. More importantly, they both raised the question as to how the judgment of identity or similarity between two designs is affected by the "degree of freedom" in creating the design. Despite the similarities between these two cases, their outcomes were very different: the court reversed the invalidation decision in Honda v. the PRB but sustained the invalidation decision in Wanfeng Motorcycle Wheel Ltd. v. the PRB.

By analyzing these two cases together, one can see that the "degree of freedom" is influential on the similarity judgment and affected by the following factors: limitations on the function of the product, limitations on the manufacturing process, difficulties in creating the design, and state of the prior designs.

Yingde brought an administrative lawsuit against the PRB before the Beijing Intermediate People's Court after receiving an invalidation decision from the PRB declaring Yingde's design patent invalid in view of the disclosures in a Chinese utility model patent. As shown in the below table, Figs. 18A and 18B of the utility model patent displayed a floating member 72 used in an infusion device, the floating member comprising a cylindrical body and two bosses 723 formed at the opposite ends surrounding the body. In addition, the written description of the utility model mentions that "six bosses may be symmetrically provided at the periphery of the cylindrical body of the floating member". The court confirmed the PRB's decision and held that the drawings in the utility model patent, together with the text in the description thereof, have disclosed a design that is similar to the patented design. It can be concluded from this case that not only drawings or photographs but also a written description of a technical solution can depict the content of a design. 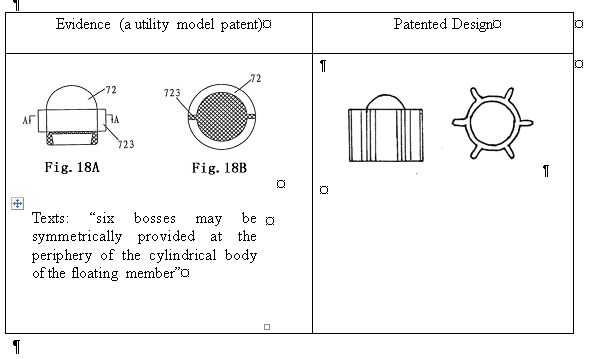 The subject matter of this administrative lawsuit is actually not a design patent, but a Chinese utility model patent. However, a design patent was cited by the PRB as a "prior art" against the inventiveness of a claim in the subject utility model patent, which directs to a wall-mounted fold out chair. In this case, the court ruled that based on the drawings (shown below) of the design patent, a person skilled in the art cannot determine directly and unambiguously that "grooves are provided on the wall fixture" and "one end of each supporting rod is connected with the wall fixture by being inserted into the grooves, the upper surface of which braces the supporting rods", as recited in the utility model claim. The court therefore overturned the PRB's decision.

Prior art (a published design)

Based on the decision in this case, it seems that, at least in theory, a design can be cited as "prior art" against a utility model or even an invention patent. In other words, a technical solution can be disclosed by drawings or photographs without any description. However, according to the decision, the contents of disclosure of a design only include the technical features which can be derived directly and unambiguously from the drawings or photographs of the design, but not contents inferred therefrom.

In many recently reported decisions, such as Ping CHEN v. the PRB, Foshan Nanhai Carlos Integrated Electrics Ltd. v. the PRB, and Guangdong Zhenghan Pharmacy Ltd. v. the PRB, the long recognized principle that "the presence of a minute and partial difference between two designs will not have a substantial influence on the overall visual effect of the designs" is confirmed. However, in Jinhua Yahu Tools Ltd. v. the PRB, the aforementioned principle was proven to not always be true. In the decision of this case, the court held that "the change in the shape of the upper part of the handles of the telescopic rods in a foldable cart only creates a minute and partial difference in the overall appearance. However, as this part is very easily observed and noticed by consumers when the cart is in use, it should not be concluded that said difference has no substantial influence on the overall visual effect of the design".

Qingsong ZENG v. the PRB case is also notable because in this case the Beijing Intermediate People's Court confirmed in its decision that "an evidence showing the existence and effectiveness of a prior right is sufficient to satisfy Paragraph three, Rule 66 of the Implementing Regulations of the Chinese Patent Law, which requires submission of evidence showing conflicts between the patent right at issue and the prior right". That is to say that the party requesting for patent invalidation only needs to demonstrate the existence and effectiveness of a prior right and is free from the responsibility of proving the conflicts.

Although the patent law is still a relatively new concept in China, with a history of less than 30 years, the Chinese people are embracing the concept and actively participating in the system, as can be seen from the increased amount of patent filings and court proceedings. Industrial designs are a very active part of the Chinese patent system. Although China does not have a case law system and the above-mentioned decisions are not binding, these decisions may be of great influence and value as reference for future cases. The decisions made in these cases may also lead to amendments of relevant laws and regulations.