China: The Benefits of Software IPR Protection In China

by Joe Tsang and Steve Lo
Ernst & Young
0 Liked this Article
To print this article, all you need is to be registered or login on Mondaq.com.

This paper looks into the economic and non-economic benefits that developing countries, such as China, can experience from an increase in software IPR protection. In comparison to China's GDP, economic impacts from increased software IPR protection may be deemed relatively minor. However, China can potentially benefit from the resultant non-economic benefits.

In addition to increasing software IPR protection, other avenues can also be explored in order to derive these economic and non-economic benefits. This paper gives an overview into these avenues as well.

1.An overview of IPR protection in China

In a bid to adopt an "Open Door" policy to welcome foreign businesses in the late 1970s, China's market economic system and reformed legal framework gave rise to China's new responsibility of increasing intellectual property protection. China gradually increased its IPR protection by joining international IPR treaties such as the World Intellectual Property Organization (WIPO) Convention, Paris Convention for the Protection of Industry Property and the Berne Convention for the Protection of Literary and Artistic Works.

In 2001, China was accepted as a member of the World Trade Organisation (WTO) and by virtue of its membership, accepted the responsibility to adhere to the Trade Related Aspects of Intellectual Property Rights (TRIPS) Agreement dictated by the WTO. 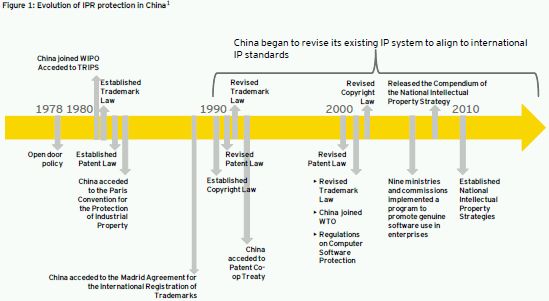 To ensure that a coordinated and efficient system is in place to protect IPR in China, a variety of entities are involved in fighting IPR infringement, including the People's Court and the various governmental administrative authorities. These entities primarily include the following:

To date, China's current IPR legal framework consists of three laws: the Patent Law, the Trademark Law and the Copyright Law. These are complemented and supplemented by related regulations, judiciary interpretations, administrative measures, and local regulations or measures. 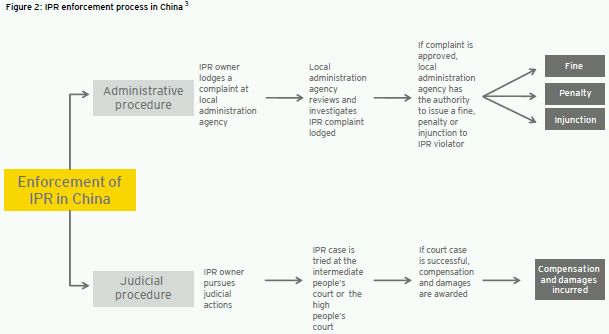 The administrative enforcement procedure has been more widely employed as it provides an effective yet inexpensive method for adjudicating IPR disputes. However, even with efforts working towards more enhanced IPR protection in China, enforcement remains a challenge. There are factors that may contribute to the challenge, such as:

In addition, investigation of infringement cases can require a great deal of effort, as details of the suspected companies are often hard to track due to China being a sizable country with a large number of companies.

Despite China's growing efforts to increase IPR protection through its legal system, IPR owners can at times encounter perceived variation between the quality of the laws and the outcome of the enforcement of the laws. As a result, IPR infringement remains a focus in China across a range of industries, such as consumer goods, entertainment, pharmaceuticals and software.

In this paper, we focus on the economic benefits that would be expected from reducing IPR infringements in the software industry in China. We aim to address the following questions around the impact of improving software IPR protection in China: 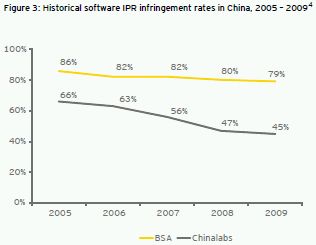 The BSA and Chinalabs figures are fairly different due to the derivation methodologies employed by the respective organizations. BSA commissions IDC, a market intelligence company, to perform annual surveys on unlicensed software usage on personal computers (PC) in China. The BSA-commissioned surveys focus on all packaged software products running on PCs, but do not include other forms of software, e.g., those running on servers or mainframes. These survey results are then used to determine the software IPR infringement rate . Chinalabs derives its figures from the results of sample surveys commissioned by the State Intellectual Property Office (SIPO) and takes into account PC software, embedded software, software services and software exports.

The table below presents a list of the various types of software IPR infringement, in no particular order. 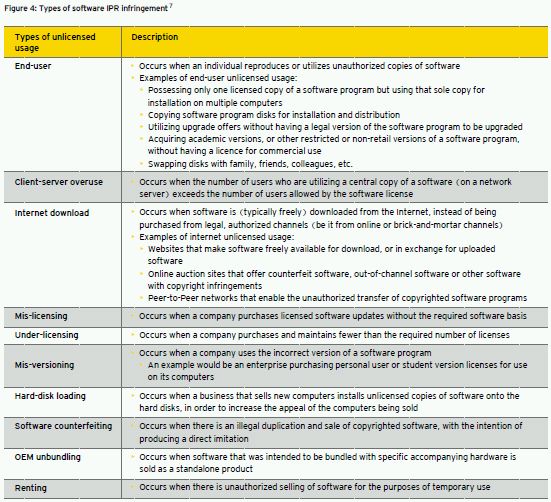 In general, internet download and software counterfeiting are the most common forms of software IPR infringements found in China. With the proliferation of download sites hosting unlicensed software, the anticipated increase in internet access speeds and the increase in the number of internet users in China, internet unlicensed usage is expected to become the leading form.

3. Why software users continue to use unlicensed software 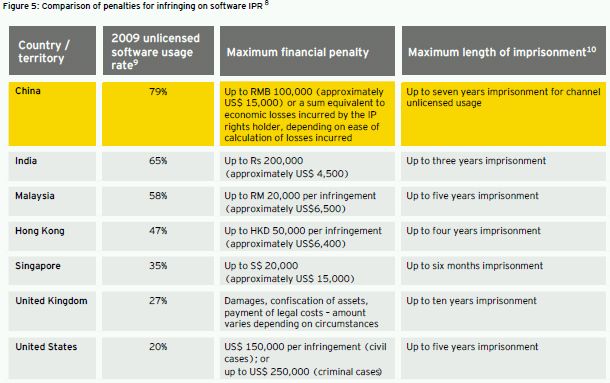 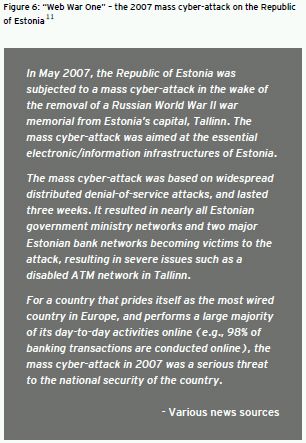 5. Further improvements in software IPR protection in China can lead to economic benefits for the country

The economic model developed in conjunction with this paper quantifies the various economic impacts of unlicensed usage on the software industry in China. The model builds a complete economic picture by considering the relevant factors driving GDP – including spending, investment and taxation. The model is underpinned by a granular analysis of the types of software in the market, and how unlicensed usage impacts the different revenues generated from the sale of software. In all, the model takes a deeper and broader view and seeks to provide an overall picture of the gains to be delivered from strengthening software IPR protection in China.

The results from the economic model show that a 10% decrease in unlicensed software usage could be worth US$ 15b over five years. This significant impact is built upon a cumulative increase in sales volumes of over 54m licences for PCs and servers across China. The model also shows that there would be wide-reaching impacts by increasing jobs in the IT sector by over 50,000 a year, as well as adding more than 1.5% to China's total IT GDP per year.

6. More importantly, further improvements in software IPR protection in China can lay the foundation for the country's drive towards the Knowledge Economy

Further improvements in software IPR protection would not only generate economic benefits for China, they would also result in intangible / indirect benefits that can impact the economy, and the country as a whole. Intangible benefits can manifest themselves in various forms, such as an increase in creativity and innovation, productivity gains, time savings and quality of foreign investments. These intangible benefits are explored in greater detail further on in this section.

While the value of these intangible / indirect benefits cannot be easily quantified, a key characteristic of these benefits is that they could contribute to China's transition to being a Knowledge Economy , which is a priority of the Chinese government. The government is keenly aware that China needs to continue building the foundations for a Knowledge Economy in order to remain sustainable and competitive in the global arena over the long-term.

With only 40% of China's 2008 GDP generated from tertiary industries , and the development of other low-cost manufacturing countries, the time is ripe for China to take greater strides through the Knowledge Economy transformation process. Other economic factors that are likely to accelerate China's transformation include the ongoing increase in buying power of Chinese nationals, fostering the increase in ability to obtain domestic and foreign higher education and foreign imports, and the continuing evolution and maturing of China's low-cost manufacturing sector.

In order to make the transition to a Knowledge Economy, China can design its transitional strategies based on the recommended "four pillars" framework. These four pillars are defined as :

2 Defined as the producers of unlicensed products

12 Tangible benefits are defined as benefits for which direct econmoic value can be measured.

13 Intangible / indirect benefits are defined here as the benefits for which direct economic value is difficult to quantify, but which nonetheless have an impact on the economy in a different form.

14 A Knowledge Economy is defined by The World Bank as one in which "organizations and people acquire, create, disseminate and use knowledge more effectively for greater economic and social development". A Knowledge Economy allows a country to develop more efficient ways of producing goods and services, which in turn results in more effective and affordable delivery mechanisms to a larger group of people.

15 Source: National Bureau of Statistics of China; compared to above 65% for countries with a higher Knowledge Economic Index ranking such as Japan, Australia, United Kingdom and the United States